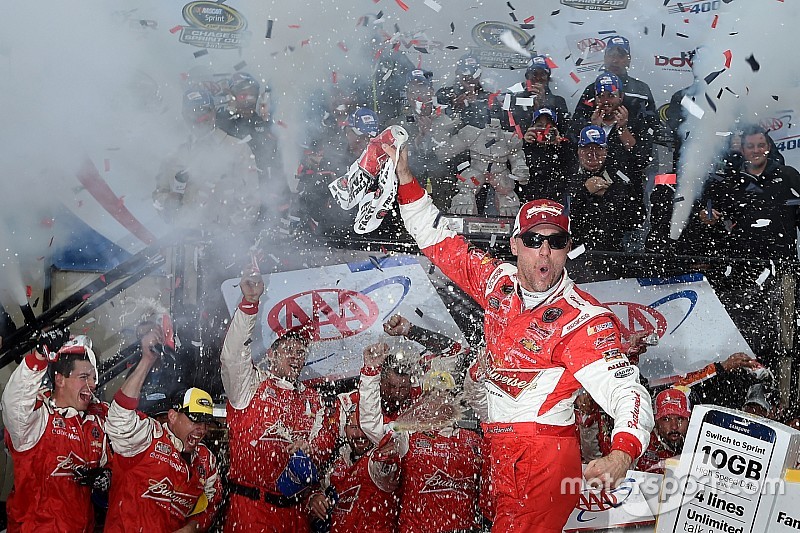 Kevin Harvick has flirted with Victory Lane for the last three weeks in the Chase, but needed to make it happen Sunday in order to stay alive in the Chase.

He made it happen.

With his win at Dover International Speedway, the defending Sprint Cup champion finally punched his ticket for the Contender Round.

“Bring it home here,” spotter Tim Fedewa told Harvick as he crossed the line on the final lap.

Harvick held off Kyle Busch by 2.639-seconds at the finish line after leading a career-high 355 of 400 laps to win his first race at Dover and his 31st career Cup win. Busch's result was enough for him to advance into the Challenger round of the Chase.

“I’m just so proud of everybody from Stewart-Haas Racing to do everything that we’ve done the last three weeks, really,” Harvick said. “Obviously, we weren’t in a great position coming it to today. That’s what these guys are made of and that’s what teamwork is all about.”

Dale Earnhardt Jr., Jamie McMurray and Aric Almirola rounded out the top-five finishers in the AAA 400. Despite McMurray's performance, he failed to transfer along with the 12 drivers after losing a tie-breaker with Earnhardt based on finishes in the first three races of the Chase.

Several Chase contenders had problems throughout the course of the race including Earnhardt. The No. 88 Chevy had two loose wheels during the course of the race. He was able to return to the pits on Lap 115 to tighten the wheel but on Lap 353, Earnhardt was looking at pitting under green before Brett Moffitt blew up to ignite the seventh caution.

Kurt Busch damaged his splitter and ran into the back of Carl Edwards car during pit stops during the sixth caution. Busch still salvaged a 17th-place finish to move on to the next round. Martin Truex Jr. was forced to start at the back of the pack after the team manipulated the right rear wheel well. He recovered with an 11th-place finish

Perhaps the biggest shocker of the afternoon was six-time champion Jimmie Johnson’s oil line failure on Lap 103. He came to pit road, but the team was forced to the garage for repairs. Johnson was 36 laps off of the pace and finished 41st. He fell 12 points out of the Chase Zone with his finish.

“Definitely disappointing,” Johnson said. “It’s just part of racing. It just shows how critical everything is on a race team and every component is. You can’t take anything for granted. Heartbreaking for sure, but nothing we can do about it. Just have to go out and try to win races and close out the season strong.”

Paul Menard and Clint Bowyer were bumped as well.

Harvick entered the weekend in a must-win situation having lost 65-points to leader Matt Kenseth after wrecking the No. 4 Chevy at Chicagoland Speedway and running out of fuel last weekend at New Hampshire with three laps remaining in the race after leading 216 laps.

“I think we’re better than we were last year just because of the experiences and things that we’ve had,” Harvick said. “I think when we look at everything that’s gone on over the last couple of years, it’s just been a lot of fun.

"So, it’s just that never quit attitude. That’s what Tony Stewart said when we went to Homestead last year. He said, ‘Whatever you do, do not quit until they throw that checkered flag’”.