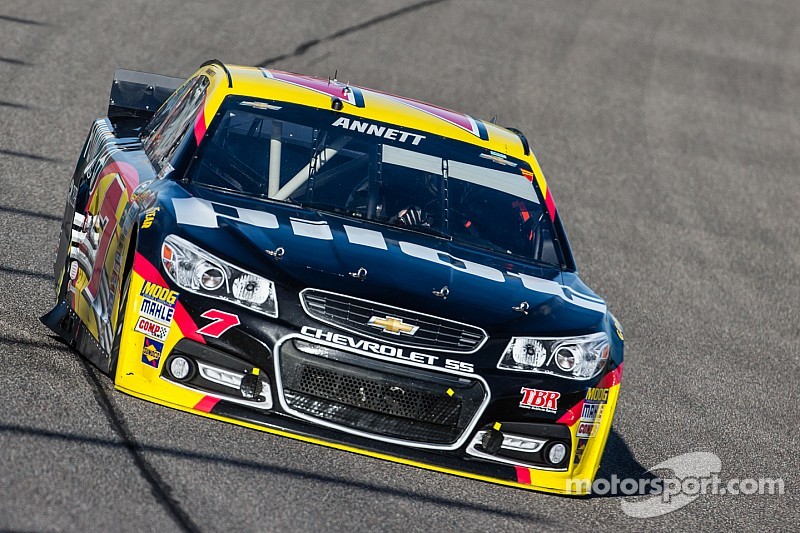 Jay Guy will be the crew chief for Michael Annett and the No. 46 Pilot Flying J Chevy at HScott Motorsports.

Since 1998, the 42-year-old crew chief has honed his leadership skills in both the Xfinity and Sprint Cup Series.

Guy most recently worked with David Ragan at Front Row Motorsports where he led the No. 34 team – and the organization – to its first win in the spring race at Talladega Superspeedway.

Over his career, Guy has worked with Team Penske, Wood Brothers Racing and Furniture Row Racing.

HScott Motorsports completed its first full-time season in Sprint Cup with Justin Allgaier and the No. 51 Brandt team last year. HSM announced an alliance with Chip Ganassi to campaign the No. 42 and Kyle Larson in the Xfinity Series and a K&N Pro Series effort with Justin Marks featuring five entries.

Team owner Harry Scott also said during the Charlotte Motor Speedway Media Tour last week that HSM will pursue a technical alliance with Stewart Haas Racing in 2015. While the team’s primary partnership is with Hendrick Motorsports, who supplies HSM’s engines and engineering, Scott calls the alignment with SHR “a more formal relationship” than in the past.

“Right now we run Hendrick chassis,” Scott said. “They hang our bodies for us. We brought a guy in house that can do our minor body work and repairs for 2015. He was a guy who had 20 years at Hendrick, so he knows the systems over there.

“So we will rely on them a little bit less than we have in the past but we still get our chassis over there and have our bodies hung over there along with our engines, gears and transmissions.”

Scott said he will continue his support to teams in the Xfinity Series and K&N Pro Series in addition to his Cup effort. Scott calls Annett “an impressive driver, who is motivated to be competitive.” He believes having teammate Justin Allgaier to lean on will benefit Annett as he acclimates to the systems at HSM.

We’re committed to making sure we devote the resources necessary to be competitive and do a great job for our partners.

“Obviously, the focus right now from the K&N side is providing a good quality, highly competitive product for these kids. We’re excited about the partnership with Chip Ganassi in the Xfinity Series and being able to leverage some of the resources that he has in his Cup shop that we’ve never had access to on the Xfinity side and then getting this additional Cup car going with Michael Annett as the driver. We’re committed to making sure we devote the resources necessary to be competitive and do a great job for our partners.”

Despite rumors to the contrary, Scott said he has “no plans in the near future” to move his Spartanburg, S.C. shop to the Mooresville, N.C.-area.

Dale Earnhardt Jr.'s new crew chief is up for the challenge