Jimmie Johnson: Ride swap with Alonso "a chance of a lifetime" 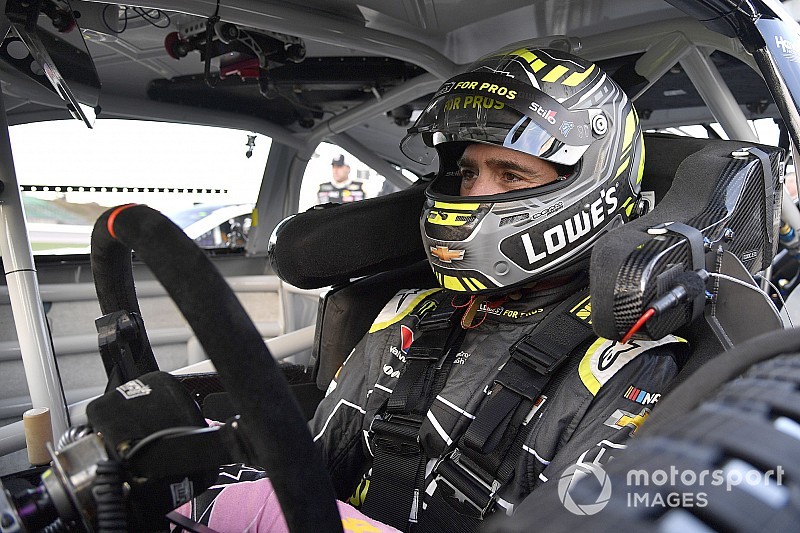 The origin of the Fernando Alonso-Jimmie Johnson ride swap may have come from a casual conversation but Johnson could never have been more serious.

Johnson and Alonso first met back in January in Charlotte, N.C, during the annual NASCAR Media Tour. Alonso was taking part in the event as part of an IMSA press conference of drivers participating in the upcoming 24 Hours of Daytona.

“We met there, traded up numbers, stayed in touch,” Johnson, 43, said Friday at Texas Motor Speedway. “It wasn’t long after that and he may have even mentioned it there, ‘Hey, we ought to trade cars.’ And I was like, ‘You don’t have to ask me twice.’

“I went after it right away. I wasn’t going to let a passing comment slow me down.”

In a teaser video released Friday, Alonso, 37, and Johnson announced they would be taking part in a day-long car swap on Nov. 26 at the Bahrain International Circuit, one day after the 2018 F1 season finale at Abu Dhabi.

The duo have been teasing a joint venture through videos posted on social media over the last several weeks.

Johnson will visit McLaren headquarters in London and spend hours in its F1 simulator before joining Alonso at Abu Dhabi for the F1 season finale.

“With the two previous (NASCAR-F1) car swaps taking place, their desires were to get it on live television, and that kind of puts you in a different box,” Johnson said. “I think in today’s world there are so many ways to share the experience with the digital experiences that exist.

“Of course you want a television piece to go with it and I think there’s a way to do that but things can live on through digital platforms for a long time. We really wanted a full day to experience each other’s cars and mess around.”

Getting the full experience

Johnson said Hendrick Motorsports packed the container ship with plenty of tires and equipment to let Alonso “run as long as he wants to get the full experience.”

“They are offering that same thing for me,” he said. “We offered up the chance to let Alonso come run the Chevy simulator (in Huntersville, N.C.) but the schedule didn’t work out from the beginning to do that.

“It’s probably a bigger change for me to go from our cars to his, so he suggested stopping by McLaren (and) taking a tour of the shop, the city. I was like, ‘Oh yeah, I’ll take everything.

“Why not? This is the chance of a lifetime. I’ll take everything they will let me do, I’m all for it.”

Asked about the long-term benefits of the ride swap, Johnson joked that his contract with with Hendrick is up after the 2020 season.

One thing Johnson is sure of, however, is like Alonso, just because his full-time motorsports career may come to end, that will not mean he plans to stop driving.

“His desires are much like a (A.J.) Foyt or an (Mario) Andretti, a Parnelli Jones where they raced everything,” Johnson said of Alonso. “Fernando is putting himself in position to really be able to do that from IndyCar, F1, sports cars and who knows where the NASCAR opportunity will take him.

“At least he gets to drive a car. I’ve been in a few different conversations with guys and I think a lot of us miss that era of time where Jones would go race anywhere around the world, Andretti was all over the place and I feel like there is a chance for that to start coming back.

“I think it will probably be more common as drivers get later in their career and have these opportunities come around, they’ll start taking them. I’m certainly planning on doing that. I don’t have anything vetted out yet. When I’m done full-time Cup racing, I’m not done racing.”