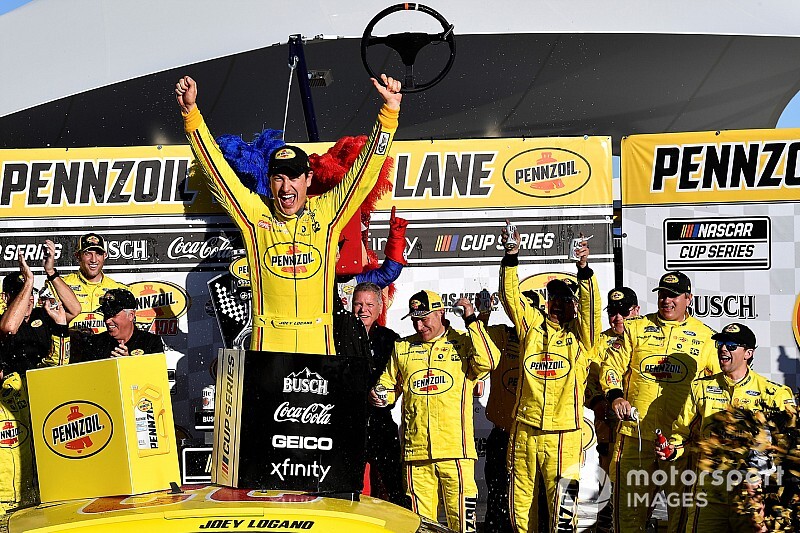 Joey Logano held on for a crazy two-lap restart and repeated his victory of a year ago at Las Vegas Motor Speedway.

Logano got a jump on the field on the restart with two of 267 laps remaining and just after he took the white flag, a wreck erupted behind him in Turn 4, which placed the race under caution.

The win is Logano’s first of the 2020 NASCAR Cup Series and his first with new crew chief Paul Wolfe. It’s Logano’s 24th win of his career.

"I'm not really sure what I was supposed to do (on the last caution), but boy, we fought hard for this one today. Man, what a battle between (Ryan) Blaney and I and Chase Elliott and (Martin Truex Jr.) earlier in the race, and then to see this finish with Matt (DiBenedetto) finishing second is great day for Wood Brothers and for Team Penske," Logano said after the race.

"Man, nothing like winning the Pennzoil 400 in front of this amazing crowd with this awesome yellow car right here in the front.  Man, this is a huge win, and nice to kick off the season with a 'W'."

Asked if a push from Stenhouse helped on the final restart, Logano said: "You get a good start like that, and I watched him, he pushed me and then he shoved me ahead, which was great, and then the block on (William Byron), that was the winning move, I was able to get down in front of him and then be able to separate myself a little bit from the field.

"Clean air was going to be key with old tires. If I got swallowed up by a couple cars, I was just going to fall backwards really quick. Being able to get that clean air, secure that.  Man, this is great getting back in Victory Lane."

Following the break between Stages 2 and 3, all of the lead lap cars elected to pit with Martin Truex Jr. the first off pit road but he had to pit a second time to tighten loose lug nuts.

That left Blaney as the leader when the race returned to green on Lap 167, followed by Chase Elliott, William Byron, Logano and Harvick.

Logano, thanks to a push from Blaney, took the lead on the restart as John Hunter Nemechek spun in Turn 2 to bring out a caution.

On the restart on Lap 172, Logano led the way followed by Blaney and Harvick. Harvick grabbed the lead on the restart only to see Logano take it back one lap later.

On Lap 176, Truex – who moments before had developed a tire rub – got into the Turn 3 wall to bring out a caution. On the restart on Lap 182, Logano led the way followed by Blaney and Harvick.

Blaney got around Logano on the restart to grab the lead only to see Harvick reclaim the top spot on Lap 184.

Aric Almirola was the first to begin a round of green-flag pit stops with 59 laps remaining in the race.

The cycle of green-flag stops was interrupted on Lap 220 when Elliott slammed into Turn 1 after it appeared he had a tire go down.

There were only three cars on the lead lap at the time, and after they pit, Stenhouse led the way on the restart on Lap 227 followed by John Hunter Nemechek Blaney and Logano.

Logano quickly moved into the lead on the restart.

With 20 laps remaining, Logano continued to hold off Harvick while Blaney remained in striking distance of both in third. With 15 to go, Bowman was moving up fast, taking the fourth position.

On Lap 255, Blaney got around Logano for the lead as Alex Bowman moved into third and began challenging for second.

Bowman got around Logano in Turn 3 on Lap 259 to move into second, less than a second behind Blaney.

With six laps remaining, Ross Chastain spun off Turn 2 to bring out a caution and bunching the field. Blaney elected to pit but seven cars stayed out.

On the restart with two to go, Logano led the way, followed by Byron, DiBenedetto, Stenhouse and Tyler Reddick. Keselowski, the first car off pit road, lined up eighth.

Elliott took the Stage 2 win when the race was placed under caution following a wreck by Christopher Bell on the backstretch.

Until the caution, Elliott had worked feverishly to hold off a fast-approaching Truex. Blaney ended up grabbing second before the caution, Truex was third, Byron fourth and Logano completed the top-five.

Following the break between Stages 1 and 2, all of the lead-lap cars elected to pit with Elliott the first off pit road. On the restart on Lap 88, Elliott was followed by Truex and Harvick.

Harvick quickly reclaimed the lead on the restart as Elliott dropped back to second and Truex to third.

Elliott closed on Harvick and got around him to retake the lead in Turn 3 on Lap 103 as Truex moved into second.

Bell and Chastain were the first two drivers to make green-flag pit stops on Laps 116 and 188, respectively, for new tires and fuel to get to the finish of the stage.

Once the cycle of stops was completed on Lap 146, Elliott emerged as the race leader followed by Truex, Blaney, Byron and Harvick.

With 10 laps remaining in the first stage, Truex closed back in on Elliott and tried to challenge for the lead again as Blaney ran third.

Elliott ran down Harvick and grabbed the lead with 11 laps to go and held on for the Stage 1 victory.

Harvick quickly moved into the lead at the start but the race was almost immediately placed under caution when Daniel Suarez’s No. 96 Toyota stalled out on the frontstretch due to an ignition issue.

The race returned to green on Lap 5 with Harvick out front followed by Logano and Blaney. Logano moved into the top spot shortly after the restart.

After working the high side, Harvick moved back into the lead on Lap 13.

On Lap 26, NASCAR displayed a competition caution to allow teams the opportunity to check for tire wear. All of the lead-lap cars elected to pit with Harvick the first off pit road. The race returned to green on Lap 31.

With 40 laps remaining in the stage, Harvick maintained a small lead over Truex and Elliott.

Elliott passed Truex and took over the second position with 20 laps left in the first stage. Harvick’s had built up to nearly a second.

Before the start of the race, the cars of Denny Hamlin, Kyle Busch, Bell and Garrett Smithley had to drop to the rear of the field for inspection infractions, while Brennan Poole dropped back because of an engine change.