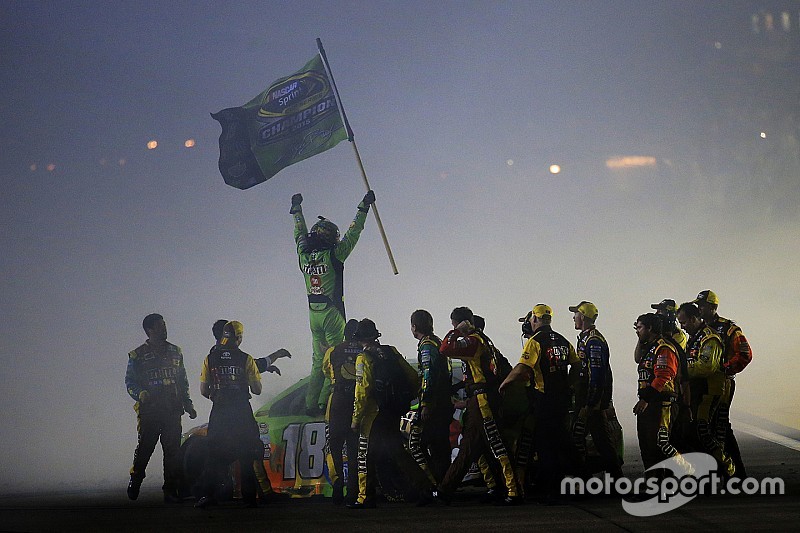 Nine months and one day ago, Kyle Busch wondered whether he would walk again, let alone race.

After breaking his right leg and left foot in a vicious wreck at Daytona International Speedway in February, Busch fought his way back to the Sprint Cup Championship on Sunday night with the win at Homestead-Miami Speedway.

His talent is so strong. But I will say that what he went through this year, I see a changed Kyle. When he came back, not only was he driven and just inspired by it, but you can tell he was racing smarter

Busch was running third — with a nine-second lead over fellow Chaser Kevin Harvick when the eighth and final caution was called on Lap 257. The No. 18 Joe Gibbs Racing team performed flawlessly and allowed Busch to line up second to Brad Keselowski for the seven-lap shoot out.

Sprint to the finish

“I just put it on kill and held it wide open over Keselowski,” Busch said.

As the field entered Turn 2, Busch took the lead and never looked back. With each lap he extended his advantage, finally besting Harvick by 1.553-seconds at the finish.

Keselowski, Joey Logano and Kyle Larson rounded out the top-five finishers. Jeff Gordon rallied back to sixth-place in his 797th and final Sprint Cup race. The fourth and final Chaser Martin Truex Jr. finished 12th. On Lap 137, Truex had issues in the pits when a spark off a lugnut ignited a fire in the left-rear wheel well. Crew chief Cole Pearn gambled with a two-tire pit stop 30 laps later that provided the No. 78 Furniture Row Racing Chevy with the point, but it was short-lived. Truex lost eight positions in 10 laps and never recovered.

But neither Gordon or Truex had a car that could compete with Busch after the track cooled down. Rookie crew chief Adam Stevens made the right adjustments throughout the evening to allow Busch to compete among the leaders. Busch led 41 laps to his fifth win of the season and his 34th career Cup victory overall.

"I don't quite understand just yet,” Busch said on his celebratory lap. “But there's something about this year.”

Coming back from Daytona injuries

Busch learned a lot about himself as he worked through rehab to walk again. If there was a blessing in being side-lined, it was the luxury of enjoying the birth of his son Brexton in May.

“I was just trying to get prepared for my son’s birth and make sure that I could be there for the hospital trip and be able to stand and support Samantha and not worry about being in a wheelchair and stuck on the side of the room, you know? That wasn’t what it was going to be all about.”

Although Busch wasn’t expected to return to racing until June, he received medical clearance for the Coca-Cola 600 on May 24. After missing the first 11 races of the season, he returned at Charlotte Motor Speedway and finished a respectable 11th — but crashed in two of the next three races.

Five races into his season — at Sonoma Raceway — Busch and Stevens scored their first win together. The No. 18 M&Ms team won again two races later at Kentucky Speedway and continued the streak at New Hampshire Motor Speedway and at the Brickyard.

Having satisfied NASCAR’s first requirement for Chase qualification, Busch then methodically worked his way into the top 30 in the point standings despite having an 11-race disadvantage. With a second-place finish at Watkins Glen, Busch was 30th in the standings and worked his way up to 25th at Richmond before the points were reset for the Chase.

His former Hendrick Motorsports teammate Jeff Gordon saw a different Kyle Busch upon his return. He witnessed a competitor that was more focused and determined.

"His talent is so strong," Gordon said, who went to personally congratulate the newly crowned champion after the race. "But I will say that what he went through this year, I see a changed Kyle. I don't know what it is. I've never talked to him and got into details about it. But when he came back, not only was he driven and just inspired by it, but you can tell he was racing smarter, with more patience, just being more deliberate, and I think he just ‑‑ between having a baby, the thing that happened to him at Daytona, the time with his wife, and other things, maybe Joe Gibbs, I don't know, family, friends...

"I think that time, he had a lot of time to think about a lot of things, and I don't know what he did, but he came out of it even better than he was before, and I think he showed it right away when he came back that there was a pretty good chance he was destined to win this championship."

In the final 10 races of 2015, Busch endured his share of hiccups, first at NHMS and later at Talladega. But when it came down to the Eliminator Round — Busch posted three top fives. With his first victory in the Ford EcoBoost 400 at Homestead, Busch owned the Champion’s Round.

“I never would have dreamed this moment to finish this year," Busch said. “This is so unbelievable but so awesome at the same time. I can’t thank M&M’s enough – the family, the company, all our supporters – it’s just been so awesome to have them standing behind me for all these years and to give me these opportunities to come out here and race their car and do the best I can.

From there it’s Toyota and their love and support – those guys are awesome and amazing. TRD (Toyota Racing Development) gave me a great engine tonight – it was so fast and our car drove so good because of Adam Stevens because of what he did and what he can do and what this company is about at Joe Gibbs Racing.”

JGR back on top

But it was the Gibbs family — team owner Joe and son J.D. (president of JGR) that hired Busch eight year ago and enabled him to earn his first Sprint Cup championship after 11 seasons on the tour.

“So cool to get Joe Gibbs and J.D. Gibbs and the family and the whole company – everyone back at the shop, thank you guys for building me such a fantastic race car this weekend,” Busch said. “To put it all together and win this championship goes back to JGR – that trophy isn’t mine, this is everyone’s here.

“I wanted to come back from rehab and do everything I could do to power through and be stronger than ever for everyone here and pay them back for all they’ve sacrificed in their lives for me.”

The 2015 Sprint Cup title is the fourth for Joe Gibbs and the first for Toyota Racing, which graduated to the Sprint Cup Series in the 2007 with the introduction of the Camry. On Friday, Toyota earned its 75th Cup pole compliments of Denny Hamlin, who came back from three laps down to finish 10th. Busch scored Toyota’s 79th Cup victory on Sunday after delivering the Camping World Truck title as a team owner on Friday.

It’s also the first title for M&Ms, who has supported Busch throughout his tenure in the No. 18 car.

“There’s so many firsts to this,” said Gibbs, whose four team earned 14 Cup wins this season. “We have M&M’s – it’s their first and they’ve been in racing for 25 years. It’s Toyota’s first and it’s awesome that Bob Carter ( Senior Vice President - Automotive Operations, Toyota Motor Sales, U.S.A.) and everyone is here. We’ve got Kyle’s first. We have Adam’s first – can you believe a rookie crew chief.

Fifth title or not, Jeff Gordon leaves NASCAR a champion