Busch has already recorded two Sprint Cup and Nationwide Series “doubles” thus far in 2013, so he hopes for another one

HUNTERSVILLE, N.C. (May 7, 2013) – Kyle Busch has proven he knows a thing or two about doubling up on a race weekend.

So it might be appropriate that the driver of the No. 18 Doublemint® Toyota Camry for Joe Gibbs Racing (JGR) will have the iconic Doublemint gum brand adorn his racecar as the NASCAR Sprint Cup Series heads to historic Darlington (S.C.) Raceway for Saturday night’s Bojangles Southern 500. 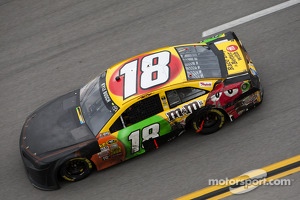 Las Vegas native Busch conquered Darlington – the “Track Too Tough To Tame” – in May 2008, scoring his first victory at the 1.33-mile, egg-shaped oval and earning the distinction of being the youngest Sprint Cup winner in the storied history of Darlington, at 23 years of age. While not on the same weekend, Busch also has one Nationwide Series win at Darlington, scoring that one in May 2011.

This weekend’s event will mark the first of four races in 2012 that Doublemint will serve as primary sponsor for Busch, as the iconic chewing gum brand’s mint paint scheme will also adorn Busch’s No. 18 Toyota at Kentucky Speedway in Sparta in June, Atlanta Motor Speedway in August, and the first race of the Chase for the Sprint Cup at Chicagoland Speedway in Joliet, Ill., in September.

Busch would like nothing more than to kick off the Doublemint slate of races with a win as the brand nears its 100th anniversary next year. So as he wheels his No. 18 Doublemint® Toyota Camry around the Darlington oval this weekend, Busch will focus on “doubling up” for the ninth time in his career while at the same time doubling his win total at the always-challenging racetrack that’s also known as “The Lady in Black.”

KYLE BUSCH, Driver of the No. 18 Doublemint® Toyota Camry for Joe Gibbs Racing:

What are your thoughts heading back to Darlington this weekend?


“Going back to Darlington, it’s a place that’s really tough, really challenging. I won there the first year it was repaved, and it’s been really fast. Last couple of years there, we had a really good car. We ended up with a solid finish with our Doublemint Camry there last year and, after the three week stretch we’ve had, I hope we can bring home a solid finish this weekend. But, I’m looking forward to going back there and seeing what Darlington has got in store for us again. I’m hearing that the track color has changed a little bit more with another year for the surface to mature, so maybe the grip level is not going to be old Darlington, but something similar.”

What makes Darlington a track that is too tough to tame?


“It’s a very narrow and challenging racetrack, especially for the speeds that we carry around there, now. We’re looking forward to the challenge with our Doublemint Camry this weekend. You’ve really got to be able to get as close as you can to the wall in order to carry your momentum through the corners because you’ve got to make the straightaways as long as you can. The track is very narrow on entries and exits, so you’re always trying to round the place as much as you can. It’s very one-groovish. You can’t really run side-by-side there. Any time you get alongside somebody, you basically have to let them go. It’s a very big give-and-take-type track. It’s a lot harder to pass now, with the fresh asphalt, than it used to be. It’s really aero-sensitive now, to where it used to be more about mechanical grip and getting your car to handle well and handle over the bumps well and keep the tires on it. Now you’re restricted off the car in front of you and are trying to find some air, basically.”

What do drivers mean when they say you have to “race the track” at Darlington?

“You can’t really pass there. It’s so difficult. So you run your laps until you get to a pit stop and try to get your guys to have a good stop for you so you can jump a couple of guys. Pit stops become really important there, and track position and trying to stay up front.”

You have eight career Sprint Cup-Nationwide weekend sweeps, two of which have come this year. How much do you feel like the experience from the Nationwide Series race helps you the next day for the Sprint Cup race?

“The Nationwide Series certainly helps me for the Sprint Cup race the next day. I feel like it helps me, anyway, just being able to get that extra seat time, being able to get that feel of what the racetrack transitions like and what the car does throughout the run and everything, and where you have to move around to. I did a lot of things at Fontana and Texas the next day that I did in the Nationwide race. But people can say, ‘Oh, well, it’s just as easy to watch the race on TV and watch what the winner does.’ But I don’t really want to sit there for three hours and watch it. I’d rather be out there feeling everything and participating in it, and of course it’s always cool when you can win both races. But we’re trying to put everything together, and this year I feel like it’s a little bit better bonus for me to race Joe Gibbs Racing cars on Saturday as it is on Sunday.”

Being a former winner, what does it take to win at Darlington?

“I won the first year there with the new car and I think it was just because everyone was new to the car. I’m hoping that gives us an advantage with this new Gen-6 2013 Toyota Camry since we’ve been fast pretty much everywhere we’ve gone so far. In 2009, a lot of people got a lot smarter. And for us, we fell a little bit behind. You just have to bide your time, and I wasn’t very good at that in 2009, but much better the last three years or so. You’ve got to make sure you keep working on your car and be very patient and be there toward the end.”