Nine years ago, Nelson Bowers formed MB2 Motorsports with partners Read Martin III and Tom Beard. Former Valvoline racing director Jay Frye was team manager and Ryan Pemberton was given his first shot at being a Cup crew chief. Bowers, Frye and Pemberton are still together and this year the operation will field three cars - two with sponsorship arrangements unique to Bowers' operation. 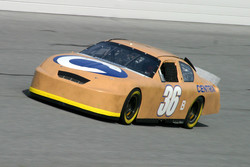 Boris Said.
Photo by Motorsport.com.
In 2000, Bowers signed Valvoline as an equal equity partner in his second team, MBV/Valvoline. It was the first time a sponsor had taken an equity position in a racing team. This unique arrangement gives Valvoline more say in how its dollars are spent and, more importantly, the company is able to closely monitor that spending. There's nothing that says "Trust" more than an open ledger.

Sutton described his decision to use the Valvoline equity-ownership model to get into NASCAR. "The advantages are two-fold. First there's CENTRIX Financial, and the exposure there as we enter the consumer market is just good marketing. Then there's the charge that I've given MBSutton Motorsports that I want to make some money with this operation. I want to make money from this business called motorsports. And when I say 'the business of motorsports', it's not just one venue. I don't believe you can necessarily make money doing just one thing. Some have, but in my particular situation, I believe in diversifying. That's why we're doing the Baja; that's why we're doing the Denver Grand Prix; and that's why we're doing NASCAR and other types of motorsports - so we can blend them.

"I told everybody that sought us out - and the best of the best have sought us out - that I was not interested in just putting decals on a racecar. If I'm going to put that kind of money and energy and effort into something, I want to see the open value. And the open value is that I want to be an equity owner. It gives you a lot of choices and a lot of options and gives you something to shoot for. You don't make money the first year, the second year; but there is an opportunity down the road. Being in the financial area and a venture capitalist, you've got to look at things over a longer term; but you have to have the infrastructure to make that happen."

Sutton was a racer in his youth. " I wanted to be in the racing business when I was 10 years old up in Burlington, Vt. I used to sneak under the fence at the local tracks. Then I did some sports cars, gymkhanas, and went on from there. Cut my teeth in dirt - off road.

"But the company that I bought - CENTRIX Financial - has really allowed me to expand aggressively in that area, so it satisfies a business need as well as a personal passion.

"We still do Baja and we own the Denver Grand Prix, an event that I have a lot of confidence in. Everybody was scared to death a year ago, and rightfully so. I went into the Grand Prix very, very carefully with a lot of trepidation. The mayor was working with us, so I said, 'Hey, if they don't make it, I'll still have something here that I believe is perfect event for Denver in the summertime.'

"But Kevin Kalkhoven and the partners have pulled ChampCar around. I'm very optimistic that they're going to make this thing happen. The Cosworth purchase alone sent all kinds of positive signals to me."