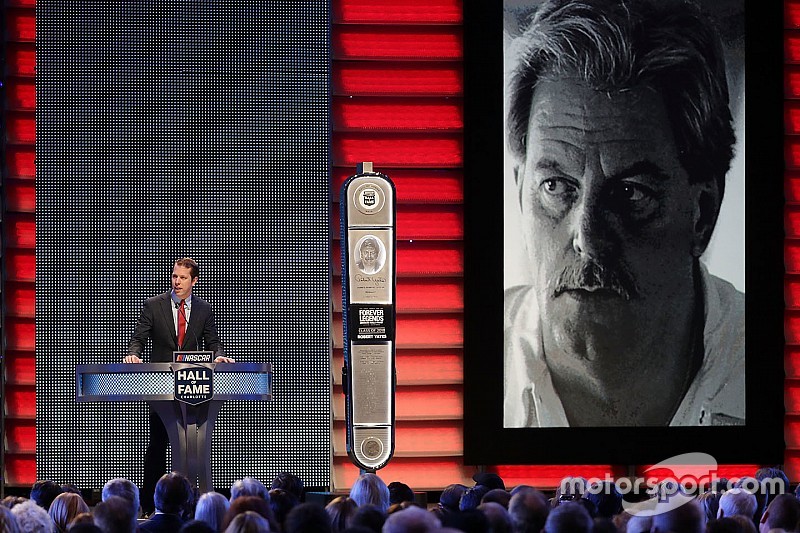 It was almost better that way.

After more than a year of watching their beloved Robert slowly slip away while finally succumbing to liver cancer Oct. 2, the Yates Family received a final farewell from their patriarch.

In Yates’ absence, his former driver and fellow Hall of Famer, Dale Jarrett, delivered the last words written by the friend and team owner who afforded him the opportunity to win the 1999 Cup championship.

When Jarrett finished the speech, there was barely a dry eye in the room. Robert Yates inspired people. And he continued to do so on Friday night.

“Tonight, like I said, was the first time I've seen it, and it was just typical my dad,” Doug Yates said of the speech. “He's going to hit on every point and give other people the credit, and it was just so well done. I'm so proud of him.

“To have Dale deliver it, you know, it was just—it was a special—I can't wait to go watch it again, because to be honest, my heart was about to jump out of my chest, and I was trying not to cry.  And so I need to go watch it again because it was something I was just really trying to get through and be strong.  But I'm really proud.”

Yates was elected to the NASCAR Hall of Fame in May for his contributions as both a championship engine builder and team owner. Between his illness and other responsibilities, crafting his induction speech was not a top priority. But with help from family and friends, he finished the task.

“So he was a procrastinator, like racers are,” Doug Yates said. “If a race is coming, you'll work hard, and if you have two weeks, you'll wait a week. But he started ‑‑ Kristi Jones, our assistant, she really helped her dad Jerry Cook write his speech, and so she got him in gear, and we got going on it. Dan (Zacharias) from Campbell and Company, they met and talked and worked on it and spent hours just talking at the house. My mom crying and laughing and sharing stories.

“They asked us if we wanted to see (the speech) this morning, and I couldn't live with that all day long, so I'm glad we waited.”

Here is Robert Yates reflecting on being inducted into the NASCAR Hall of Fame:

“When I started in racing, this was not the goal. All I wanted to do throughout my career was win races.  I would always say, I don't race for the money, I race to win. For me, that's what it's always been about, but to be part of this year's induction class is a true honor. There are a lot of other people I want to thank because this isn't really about me; it's about those who gave me the opportunity to do something I love.

“I want to thank Bill France Jr. He loaded me up with wisdom through the years, and while some of our conversations were tough, he taught me things about this sport that were invaluable. And Edsel Ford and Ford Motor Company, when you get to know people like Edsel, you realize that you're always part of the Ford family, and that means a lot.

“Working in the Holman Moody engine shop turned out to be the best education I could ever ask for. We worked day and night, but if it wasn't for people like Jack Sullivan, John Holman, and Ralph Moody, I wouldn't have developed the skills I needed.

“Junior Johnson is a man of few words, but I'll never forget, we were at Charlotte Motor Speedway one day, and he looked me straight in the eye and said, ‘Robert, I've got to have you.’ We worked out a deal where he basically allowed me to run my own shop, and nobody appreciated what I did during that time more than him. So Junior, thank you.

“I learned what it was like to run a race team in 1976, when I took over as general manager for DiGard Racing.  I worked with Hall of Famers like Darrell Waltrip and Bobby Allison and had 10 great years there. The Allisons have been a big part of my life. I won a championship with Bobby in 1983 at DiGard, and then got to work with Davey, who was always so positive. When I bought Harry Ranier Racing, I knew other people wanted to hire him, so we talked about it, and he said to me, ‘Robert, I'll always work for you.  You don't ever have to worry about me.’

“Losing Davey was painful. We shed a lot of tears and didn't know how we would move on, but we did. As NASCAR started to move to more multi‑car teams, Ford approached me about running the Quality Care car in 1995. I never liked the idea of two cars. Dale Earnhardt Sr., and I always talked about how, until they made two places for cars in Victory Lane, you only need one. So I wasn't fond of running a second team, but it worked out well.

“We hired Dale Jarrett on a handshake deal done at the Raceway Grill in Darlington. We didn't sign a contract until several months later. Todd Parrott came on as crew chief, and everything just clicked. We won the Daytona 500 in 1996 in our first race together, and then won the championship in 1999. It was a special time in my life with a special group of people. So to you, Dale, Todd, and everyone who worked at Robert Yates racing or in our engine shop, you have my deepest appreciation.

“My brothers and sisters were all good students, but I didn't care about going to school. I was the only kid in my family that didn't make straight A's. That's when my sister, Martha Brady, stepped in. I moved from Charlotte to Wake Forest and lived with her. She told me what classes I was going to take, and that was the first time I studied and made straight A's. My sister Doris Roberts talked to me about going to Wilson Tech, and that was the best two years of school I ever had. I loved physics and geometry. So if it wasn't for my two sisters, I don't know where I'd be today.

“Another person I want to thank is my twin brother, Richard Yates. He's been a big part of my life, and I love him dearly.

“When I was working for Junior Johnson, I would take Doug to the shop. He was still in diapers, but the floor was clean, so I would put him down there, and he would sort out nuts and bolts.  He could sort them out and put them all in the right bin. I knew he was destined for a career in racing. Little did I know that would include working side by side with him for 20 years. Doug, I couldn't be prouder of the man you are today. I love you.

“I used to give Amy rides on my dirt bike when she was only two years old. She would sit in front of me and laugh and hold the handlebars and say, ‘faster, Dad, faster.’ She's a great mom to her four kids and the sweetest daughter a dad could ever ask for. Amy, you're my baby doll, and I love you. Doug and Amy have given Carolyn and I eight wonderful grandkids. Your futures are bright, and I love each of you dearly.

“It's been 51 years since I took a four‑day leave from the Army and made the best decision of my life:  I married Carolyn. She's been by my side ever since and has supported me every step of the way. I worked all hours of the day and night, but she never called to say, get home. She let me work.

“Carolyn, I don't know where the time has gone, but it seems like yesterday we were in a one‑bedroom apartment trying to make ends meet. You're the light of my life. You've always been there for me, particularly this past year. Your devotion reminded me of our vows:  In sickness and in health. And I love you.

“I never prayed to win a race. I just prayed for the wisdom to help me make good decisions. My creator didn't always give me what I asked for, but he gave me more than I deserved. I thank you for this great honor. Good night, and God bless.”