Rondeau joined Furniture Row Racing in 2010 as crew chief. He will oversee the building and preparation of the team's Chevrolets for driver Kurt Busch

DENVER, Colo. – Pete Rondeau, who has been affiliated with Furniture Row Racing since the 2010 season, has been elevated to the competition director position for the NASCAR Sprint Cup team. 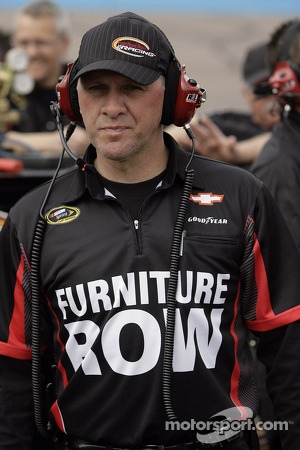 Rondeau initially joined the Denver-based Furniture Row Racing as the team’s car chief. He assumed the crew chief role in May 2010 and served in that capacity until July 2012.

In his new position as competition director, Rondeau will be the point person at the Denver race shop with the building and preparation of the team’s No. 78 Chevrolets which will be driven by former NASCAR champion Kurt Busch.

“Since joining Furniture Row Racing Pete has played a significant role with team development,” said team general manager Joe Garone. “His transition to the competition director position is having a positive impact in our continuing effort to strengthen our overall program.”

Rondeau is also upbeat about the direction of Furniture Row Racing.

“With the tremendous gains Furniture Row Racing has made in recent years and the solid foundation that it has built, the opportunity has never been better to reach a higher level of competition,” said Rondeau. “That is why I am enthusiastically looking forward to this new challenge and working with Mark (McArdle) and also with my counterparts at RCR.”

Prior to joining Furniture Row Racing, Rondeau worked at Evernham Motorsports where he served as the team's director of research and development from July 2005 to the end of the 2009 season.

He also worked at Dale Earnhardt Inc. (DEI) from 2001 to May 2005 and Jasper Motorsports from 1998-2001. During his three-plus years at DEI, Rondeau's positions included the crew chief role for both Michael Waltrip and Dale Earnhardt Jr.

Rondeau has also had experience behind the wheel of a race car. Before he traveled south to North Carolina in 1998 to work in NASCAR, he raced for many years on the New England short tracks, including super late model cars in the American Canadian Tour. He also drove in NASCAR’s Pro Series East and the Whelen Modified Tour Series.

Danica reveals all to the AP – it’s Ricky!