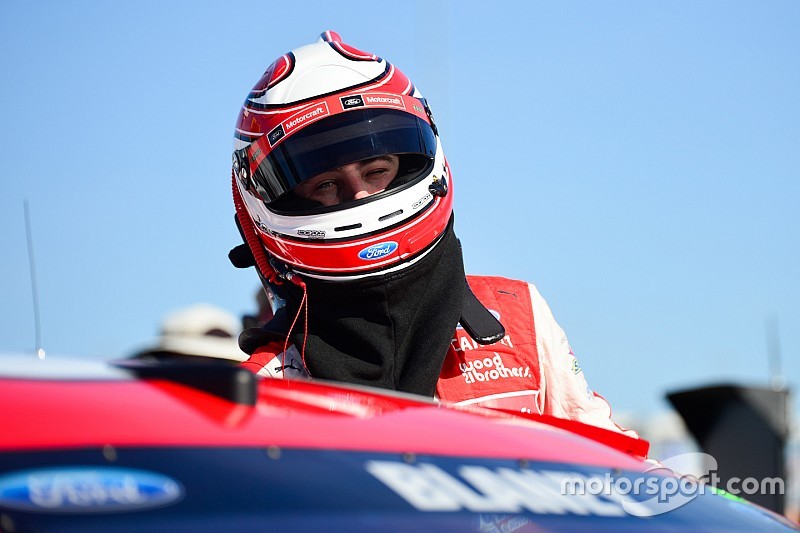 Rookie Ryan Blaney recorded his best finish on an open-motor track on Saturday.

Although Blaney’s career-best came at Talladega Superspeedway last year when he finished fourth, his fifth-place run at Kansas Speedway marked his fourth top 10 of the season and elevated the No. 21 Motorcraft Ford to 16th in points.

“We started off the race really, really good,” said Blaney, who started seventh. “I thought that was when we were strongest, when the sun was up, the track was a little bit hotter. We were really strong then.

Blaney and the Wood Brothers crew executed its game plan flawlessly. During the first half of the race, Blaney was the top Ford in the Go Bowling 400. Just before Lap 150, his Penske teammates passed him. However, when Denny Hamlin bowled over Brad Keselowski and eJoey Logano in Turn 4 on Lap 240, Blaney — who “was right behind it” — took advantage of the situation.

“We got some spots with that little accident,” Busch said. “I don't know what happened. I didn't see who got loose, who got into who. I saw smoke, had to bail out of there. The 22 (Logano) got tore up. He was pretty fast towards the end of the night.

“That stunk for them. I felt like their cars were pretty good at the end of the race. I think it actually hurt my car a little bit. Had (indiscernible) to the apron a little bit. It actually hurt the nose a little bit, which was unfortunate. Luckily we were able to get by that and move on. But we were up there all day.”

The third-generation racer reported his father, Dave Blaney, was fine following a wreck at Eldora Speedway on Friday night. Blaney, 53, was transported to a local hospital — near the Rossburg, Ohio dirt track — after he was injured while qualifying the No. 71M Motter sprint car in the World of Outlaws Race. The 1995 WoO champ was released following a CT scan just after midnight.

“My dad, he got out of the hospital this morning,” Ryan Blaney said. “He called me this morning when he got out. He was still laying in the hotel room, about to come home. I think he got home actually in time for the race, so I think he was able to watch the race.

“He got his bell rung pretty good, but he's all right.”

The younger Blaney, who had a sponsor appearance on Friday night, said he was relieved to hear his father’s voice.

“Yeah, it did,” Blaney said. “I knew last night he was going to be all right. I was scared for one second because we got done qualifying yesterday and I get back to the motorhome. I laid my phone in the bus. I got all these text messages: “Heard the news, is everything all right?”

“Is there anything we can do to help?”

“It's amazing how you find out what's going on on Twitter from other people than getting texts or calls or something like that,” Blaney continued. “When I initially saw it, I was a little worried because they made it sound worse than what it was on Twitter. I called one of his crew guys, and he told me he was going to be all right. He was alert and awake and everything like that.

Hamlin, other contenders wreck late while fighting for second - video