Spingate one year later: the anniversary MWR would prefer to forget 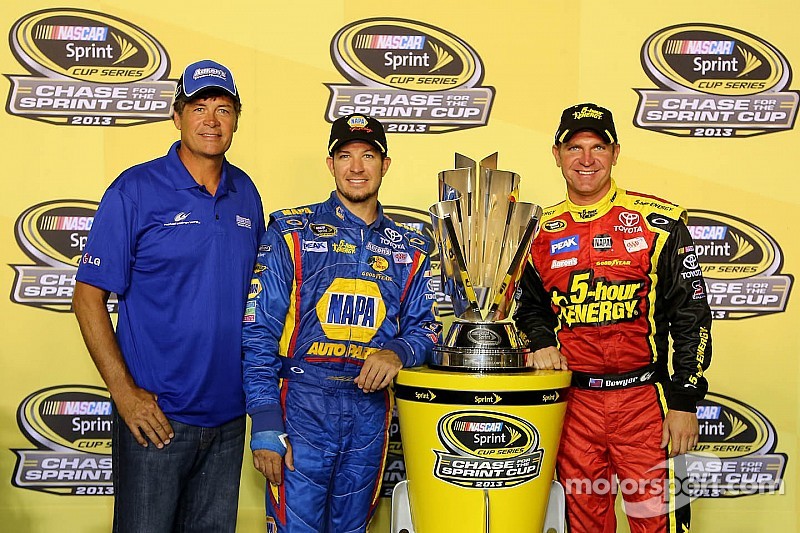 As Michael Waltrip Racing looks to regain its footing, its team owner is "Dancing with the Stars".

RICHMOND -- Perhaps it’s a good thing team owner Michael Waltrip landed an invitation to “Dancing with the Stars,” because it looks as if the jig might be up at Michael Waltrip Racing.

MWR hasn’t been the same since Waltrip tap-danced around the race-manipulation debacle at Richmond last year, leaving vice president Ty Norris to take the fall as the architect of the embarrassing faux pas.

The 26th regular-season race of the season at Richmond is the last tango for the Chase hopes of MWR drivers Clint Bowyer and Brian Vickers, whose only realistic avenue to NASCAR’s 10-race playoff lies in winning the Federated Auto Parts 400.

What a difference a year makes.

Entering the 26th Sprint Cup race of 2013, MWR was a true Chase contender. The once flailing operation had evolved from the also-ran category into one of the few organizations expected to run for the championship.

With the business acumen of Rob Kauffman, the star power of Clint Bowyer and the technical direction the organization found with the acquisition of Scott Miller, MWR had become a formidable force in the Cup ranks.

Bowyer was second in the points standings from the July Daytona race until Richmond. His former MWR teammate, Martin Truex Jr., who was in the Chase the previous season, won at Sonoma but an engine failure and two crashes relegate the No. 56 NAPA Toyota to just outside of the playoff zone for most of the year. Truex was 13th in the point standings entering Richmond.

But MWR didn’t stay the course. Greed won out. Perhaps it was the seven-figure bonus NAPA offered for making the Chase. Perhaps it was just the intensely competitive nature of management. Whatever the reason, the machinations behind "Spingate" had a devastating effect on MWR’s progress and reputation.

In the closing laps of the Federated Auto Parts 400, Bowyer received a questionable radio communique suggesting he “scatch an itch.” With seven laps remaining in the race, Bowyer “lost control” of his No. 15 Toyota. His spin on the frontstretch caused the final caution. Norris compounded problem by directing Brian Vickers to pit unnecessarily, starting a chain of reactions that forced NASCAR to react.

Vice president Robin Pemberton characterized the incident as an attempt “to manipulate the outcome of the race.” Consequently, Bowyer, Truex and Vickers were penalized 50 driver points each and MWR was fined $300,000. Although Truex finished seventh in the race, the penalty knocked him out of contention for the second Wild Card position in the Chase.

2) Martin Truex Jr. – After NAPA pulled its sponsorship, Truex felt compelled to start his own job search. He quickly landed a ride with Furniture Row Racing and the No. 78 Chevy. Truex, 34, is currently 15th in the point standings. He has one year left on his contract.

3) Chad Johnston – Johnston, Truex’ crew chief at the time, saw the writing on the wall as well. Johnston joined Stewart-Haas Racing at the end of the season as Tony Stewart’s crew chief.

4) Brian Vickers – One month prior to "Spingate", Vickers signed on to drive the No. 55 Toyota for MWR full-time in 2014. However, he had expected to compete this season with Rodney Childers as his crew chief. Childers elected to leave MWR and join SHR where he is enjoying an productive season with Kevin Harvick on the No. 4 Chevy. Vickers, 30, is 18th in the points standings.

5) Clint Bowyer – Professionally, Bowyer might be the biggest loser of “Spingate.” Once one of the most popular drivers in all of NASCAR, Bowyer is still suffering for the sins of his superiors. Although the jeers have quieted in the last year when he struts across the stage for driver introductions, it’s been difficult to erase the images of a poorly planned spin that changed the course of NASCAR history.

On Friday at Richmond, Bowyer attempted to deflect the questions he knew were coming. On the one-year anniversary of his most embarrassing moment, Bowyer’s focus should have on qualifying for the Chase. Although he’s 12th in the point standings, in the Chase Grid Outlook, Bowyer sits 17th – 23 points behind Greg Biffle, the 16th driver.

When asked if he were still “hung up” on the repercussions of Richmond 2013, he replied in typical fashion, “Hell no!”

“Like I said, it's a good race track for me,” said Bowyer, who qualified sixth. “I have a lot of fun here.  Pre-race and everything else.  The fan base here has always been good.  It's a good vibe and a good feel for a race track being that it kind of reminds you of pulling in to the old fairgrounds at a dirt track.  There's houses across the street and this is what short track racing is all about right here."

If Bowyer has any regrets, it would be in igniting the firestorm that followed Richmond. Rather than kick off the Chase with the possibility of winning a championship, Bowyer was issued a gag order which has silenced the driver who was once the life of the party.

"You never want to create a storm in any sport or for anybody,” Bowyer said. “Any of your peers, your friends, your family, anybody.  Hell, for yourself.

“Do you think I wanted to be in the middle of all of that mess?  I wanted to go to Chicago and enjoy Chicago.  It's a pretty fun city, and instead I had to answer your questions again."

It's been 66 races since Bowyer's last Cup win. And although Bowyer’s Chase prospects are tenuous at best, the Emporia, Kansan’s personal outlook is grounded more by what matters most.

After Richmond, it's back to serious business for Dale Earnhardt Jr.