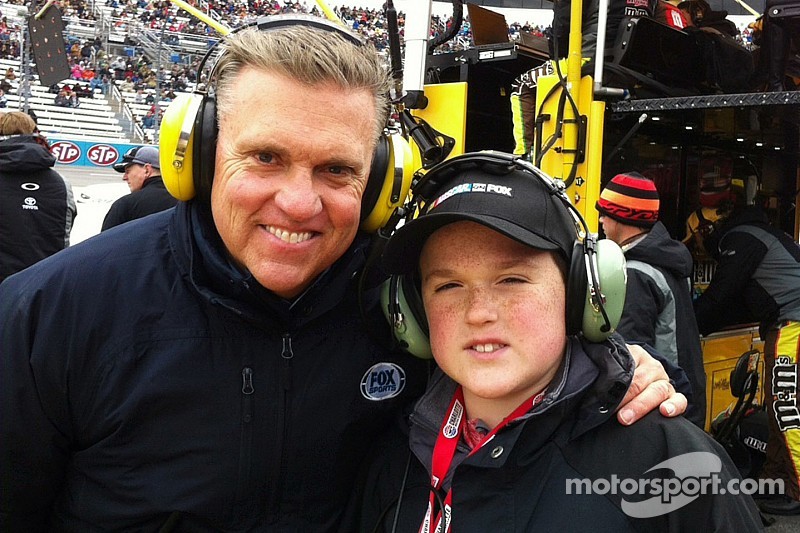 Most recently, Byrnes, 56, was a member of the FOX Sports broadcast team. More importantly, Byrnes was the husband to Karen and father to Bryson.

Byrnes, a 1981 graduate of the University of Maryland, started his 30-year broadcasting career at WCIV-TV in Charleston, S.C. but quickly rose through the ranks with CBS, TNN and WTBS before landings with FOX Sports in 2001.

The affable Byrnes worked as a host and reporter on a variety of NASCAR and NFL programs. In recent years, Byrnes did play-by-play for FOX Sport 1 on the Camping World Truck Series and was the co-host of Race Hub.

“From the very beginning of NASCAR on FOX, Steve Byrnes was one of the linchpins of the broadcast team," said David Hill, Senior Executive Vice President, 21st Century FOX said in a release.

"His passion for the sport -- his passion for everyone involved with the sport -- shone through week in and week out. But even more than that, Steve was defined by his journalistic integrity and kindness; his ability to communicate everything from complex technical issues to the highly emotive human dramas in this sport, where injury and or death are constantly just one mistake away.

"The consummate television professional, he established himself as a star on SPEED Channel, where viewers simply loved his knowledge, his sense of humor and his easygoing nature, becoming the Mr. Rogers of NASCAR -- a warm voice everyone trusted.

"Even more impressive, and fully on display last weekend in Bristol, Steve was loved and respected by the entire NASCAR community, from the drivers to the team owners to the front office executives. I am devastated by his passing -- he was not only a trusted and gifted colleague, but a mate -- my heart goes out to Karen and Bryson.”

As a testament to Byrnes’ popularity, last weekend’s Sprint Cup Race at Bristol Motor Speedway was renamed the Food City 500 In Support of Steve Byrnes and Stand Up To Cancer. Supporters throughout NASCAR had the hashtag "#ByrnesStrong" trending on Twitter.

“NASCAR extends its condolences to the many friends, FOX Sports colleagues and family of Steve Byrnes," Brian France, NASCAR Chairman and Chief Executive Officer, said in a release.

"Whether you had the privilege of knowing him or if you watched him on television for the last three decades, Steve’s work ethic and authenticity made him a beloved individual inside and outside the garage.

“His level of professionalism was matched only by the warmth he showed everyone he met. He battled cancer with tenacity, and was a true inspiration to everyone in the NASCAR family. Simply stated, we’ll miss Steve dearly. Our thoughts are especially with his wife Karen and son Bryson during this difficult time.”

Harvick at the White House: President cracks wise about DeLana's 'own firesuit'