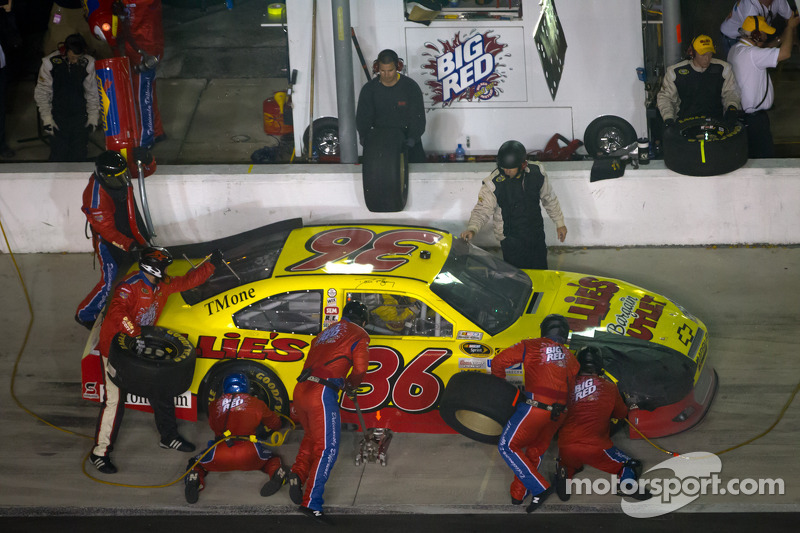 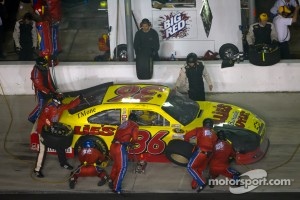 AVONDALE, ARIZ. (March 5, 2012) – Tommy Baldwin Racing looked to ride the momentum of a solid finish and good exposure in Daytona with two entries this weekend at Phoenix International Raceway. David Reutimann made his team debut in the No. 10 Accell Construction Chevrolet. He started 32nd and drove into the top-25 before an engine failure relegated the team to a 36th-place finish. Dave Blaney started 23rd, and the No. 36 Ollie’s Bargain Outlet team worked on the Chevrolet throughout the day. The team finished 23rd in the Subway Fresh Fit 500.

By the first caution on lap 18, Reutimann drove the No. 10 Accell Construction Chevrolet to the 31st position and radioed to the crew that the car was loose on entry, plowing on exit and needed to rotate in the center better. The team changed four tires and made a spring rubber adjustment. The changes helped the Chevrolet’s handling, and Reutimann raced into the 26th position by the second caution of the day on lap 61. The crew made another four-tire stop and spring rubber adjustment.

The field went back to green flag racing on lap 65 with the No. 10 in the 28th spot. As he drove into the top-25 on lap 76, Reutimann radioed that the exit of the turn was better but he was still loose on entry.

A caution for an incident with the No. 13 car in turn two allowed Reutimann to drive down pit road for four tires, fuel and air pressure and wedge adjustments. Twelve laps later, a three-car incident brought out the caution with the Accell Construction Chevrolet in the 22nd position. The team made another four-tire pit stop with an air pressure and wedge adjustment to help the No. 10 Chevrolet on entry.

As green-flag pit stops started on lap 181, Reutimann moved into fifth place before pitting on lap 194. He returned to the track in the 25th position, one lap down. A lap 229-debris caution allowed the team to stay out for the wave around. The No. 10 Accell Construction Chevrolet restarted on the lead lap in the 22nd position. By lap 244, Reutimann radioed that the car was smoking. He brought the Chevrolet down pit road to assess where the fluid was leaking.

The team found a terminal issue in the engine. The No. 10 Accell Construction Chevrolet finished 36th in Reutimann’s debut. The No. 10 team is now 42nd in NASCAR Sprint Cup Series (NSCS) Owner Points. They are one point behind the No. 98 in 41st, five points ahead of the No. 21 in 43rd and eight points outside of the top-35. Reutimann is 29th in NSCS Driver Points. He is one point behind Terry Labonte in 28th and one point ahead of Tony Raines in 30th.

“I’m disappointed,” explained Reutimann. “I felt like we had an okay car and were making it better throughout the race. It looked like we were going to have a decent finish, but we had a mechanical issue at the end of the day. I felt like we had things going in the right direction, but it didn’t work out. Our focus right now is getting in the top-35, so we don’t have any issues qualifying later in the season. We’ll go into Vegas and try to make up the points we lost this week.”

Dave Blaney – No. 36 Ollie’s Bargain Outlet Chevrolet Having to qualify on time, Blaney focused on qualifying runs in practice and posted the 20th and 24th-fastest times in the first and final practice sessions. In qualifying, Blaney drove the No. 36 Ollie’s Bargain Outlet Chevrolet to the 23rd starting spot, the top-spot of cars needing to qualify into the 312-mile race.

Blaney started in 23rd place but fell to the 30th position by the first caution on lap 18, as he struggled with the handling of the No. 36 Chevrolet. The Ollie’s Bargain Outlet crew changed four tires and made a chassis adjustment. The Hartford, Ohio native restarted 36th on lap 21. Blaney raced into the 27th position during the next forty laps, when officials called a caution for debris on the track.

The No. 36 Ollie’s Bargain Outlet team made another four-tire pit stop and chassis adjustments. Blaney continued to race in the top-30 for the next run. Just as the No. 36 Chevrolet fell a lap down, Casey Mears spun in turn two resulting in a caution. Blaney received the lucky dog and gained the lap back. He pit for four tires and adjustments before the field went back to green on lap 118 with the No. 36 Ollie’s Bargain Outlet Chevrolet in the 27th position.

Blaney drove into the top-25 before the fourth yellow flag flew for a three-car incident on the frontstretch on lap 134. During the caution period, the team made another chassis adjustment while making a four-tire pit stop.

The next green flag run led to green-flag pit stops starting on lap 181. Looking to pit around lap 194, the No. 36 Ollie’s Bargain Outlet Chevrolet began to shake, and Blaney pit on lap 188. The team worked to assess the problem and make a four-tire pit stop with adjustments during the green-flag stop. Blaney returned to the track in the 29th position, two laps down.

Blaney held his position for the remainder of the race and made pit stops and adjustments during the final three cautions. The No. 36 Ollie’s Bargain Outlet Chevrolet finished in 23rd-place, three laps down.

“The handling of the car was pretty good,” Blaney said. “We struggled with the same issue of loose in and tight off the corner all weekend. Both cars had the issue at the start of the weekend, and we struggled to fix the handling throughout the race. The first half of the race we both were racing really good cars; we both just struggled at the end. Overall, our speed compared to the field was pretty good. It was definitely an improvement from last year.”

Blog: Can Jimmie 48 Make the Chase?