KANNAPOLIS, N.C., (May 12, 2011) – Like many Americans, Tony Stewart is in middle management. Even though he’s his own boss at Stewart-Haas Racing – the two-car NASCAR Sprint Cup Series team he co-owns with Haas Automation founder Gene Haas – the championship point standings indicate he’s not the leader, but he’s not working the mail room either. He’s right in the middle. 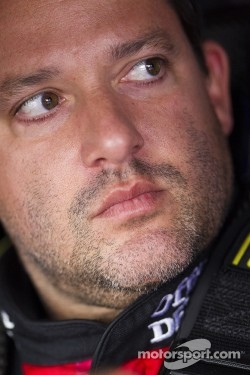 Ten rounds into the 36-race Sprint Cup schedule, and just 16 races away from the Chase for the Championship, Stewart is a respectable seventh in points, 65 markers arrears series leader Carl Edwards and 26 points ahead of 11th-place A.J. Allmendinger. It’s not where Stewart wants to be, but he’s far from being shown the door, even as the 11th and 12th Chase spots, respectively, are held for race winners outside the top-10 in points but within the top-20.

Like a young executive, time is on Stewart’s side. He’s still winless this season, but his resume indicates that those wins will come. Of Stewart’s 39 career Sprint Cup wins, only two have come before the month of May. And at Dover (Del.) International Speedway, site of Sunday’s FedEx 400 benefiting Autism Speaks, Stewart has two wins, three second-place finishes, 10 top-fives, 15 top-10s and has led a total of 1,072 laps in 24 career Sprint Cup starts.

The driver of the No. 14 Mobil 1/Office Depot Chevrolet Impala comes into Dover with back-to-back top-10 finishes at Richmond (Va.) International Raceway and Darlington (S.C.) Raceway that have gained him five point positions. Dover, home to back-to-back wins for Stewart when he swept the track’s two Sprint Cup races in 2000, provides yet another opportunity to move up NASCAR’s version of the corporate ladder.

Status and the equivalent corner office are directly proportional to one’s point standing. Leading the points and running competitively? Well, here’s a pass to the country club and keys to the company car. Outside the top-10 in points and winless? HR will be contacting you for a skill-set review.

When there are 43 drivers in a race where the top-30 in points are capable of winning – witness Regan Smith’s Darlington victory that bumped him up two spots to 27th in points – it’s readily apparent that “Survivor” isn’t just a reality show on CBS. A driver and his team must outwit, outplay and outlast their counterparts to earn a Chase berth.

Stewart is a six-time Chase participant and a two-time Sprint Cup champion (2002 and 2005). He’s visited the top of the mountain twice and is an annual figure at base camp. Each charge to the top began in the spring. Most started quietly, then gained steam in the sultry summer months before Stewart was Gordon Gekko in a firesuit – gobbling up points in hostile takeovers of the Sprint Cup championship.

There’s definitely a string of tracks coming up that makes me feel a little more comfortable ...

Days away from turning 40, Stewart’s drive is still as tenacious and quick as it was when he won the 1995 USAC Triple Crown – simultaneous titles in the Sprint, Midget and Silver Crown divisions – and the 1997 IZOD IndyCar Series championship.

With sprinkles of salt now plainly visible in his dark hair, Stewart’s renowned skill is augmented by deep experience – traits that are found in nearly every CEO. As Stewart continues to work his way up from middle management in this year’s Sprint Cup campaign, his eyes are fixed on being top dog.

Despite the increased temperatures, Stewart won’t sweat the point standings now. He does, however, plan to take care of business at Dover, and climb another rung on that championship ladder.

Does it help that you’re coming up on the summer months, when it gets hot and you visit some racetracks where you’ve had success?

“It’s definitely a section of the season that I’m looking forward to, for sure. There’s definitely a string of tracks coming up that makes me feel a little more comfortable, going to tracks that I know we’re historically good at.”

Dover’s surface is concrete. Do you have to alter your driving style when you race on concrete?

“I don’t think you drive it any differently. But because it is concrete, the track has a lot more bumps than an asphalt track would. There are seams in Dover’s surface and places where they’ve cut the concrete for expansion. Those sections shift and change, and every year when you go there, the bumps are a little bit different than they were the year before. Dover is a track that’s constantly changing. But it’s one of those places where you really can’t change your driving style. You still have to do the same things you always do. It’s just a matter of finding the package that’s right for that racetrack. But other than that, you go through the same set of scenarios and challenges you would on any asphalt track – either the car is going to be tight or it’s going to be loose.”

Dover is a pretty unique track being that it’s a high-banked, 1-mile concrete oval. How do you approach it?

“Dover is a track that is kind of a two-phase deal. It’s easy to get your car too tight in the center (of the corner) trying to get it to drive up off the corner nice, and it seems like if you get it to rotate through the corner, then it’s way loose off. Those are the two things that you really battle there. It’s the sacrifice of where do you want to be a little bit off to accomplish having a balanced car.”

It’s just a matter of finding the package that’s right for that racetrack.

Is Dover the type of racetrack where a driver can make up for a racecar that isn’t handling well?

You turn 40 on May 20. Any thoughts on hitting that milestone?

“Well, I’ve got no choice in the matter. I learned that lesson when I turned 30. The sun came up that day and I woke up the same as I did at 29 the day before. I’m sure when I turn 40, it’ll be the same thing.”

You recently announced the details of the seventh annual Prelude to the Dream, which will take place June 8 at Eldora Speedway in Rossburg, Ohio. It will again be televised on HBO Pay-Per-View. Why should someone order it and watch it on Pay-Per-View?

“The Prelude to the Dream is a race that we hold prior to ‘Dream Weekend,’ which is one of our biggest weekends at Eldora Speedway. Professional dirt Late Model racers from across the country are racing for $100,000 to win. The Prelude to the Dream is on the Wednesday before, and it’s a race that myself and more than 25 drivers from the NASCAR Sprint Cup Series, NASCAR Nationwide Series, NASCAR Camping World Truck Series and the NHRA compete in for bragging rights, but also to raise money for charity. It’s a fun atmosphere for the drivers, crews, fans and the people watching at home on Pay-Per-View. Most of these guys don’t race on dirt very often, so it’s a chance for a lot of us to go back to our roots and have a great time. The viewers at home get to see us much differently than they would on a normal race weekend. There are no points, no pressure, just a lot of fun. This year, we’re helping out children by raising money from the Prelude to benefit four of the nation’s top children’s hospitals – Levine Children’s Hospital in Charlotte, N.C., Children’s Healthcare of Atlanta, St. Louis Children’s Hospital and Children’s Medical Center Dallas.”