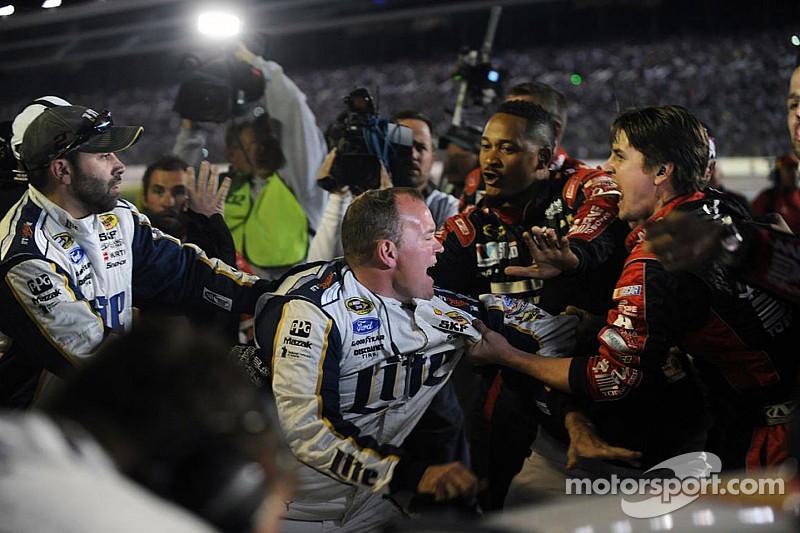 Looking back over the top 20 moments of 2014, we could not help but mention the new Chase for the Championship format that saw fist fights, brawls and a lot of on track action too.

NASCAR wanted to build excitement with their new Chase format.  It’s certainly safe to say that they’ve got it.

With the field narrowing down every few races, we saw everything from drivers taking risky moves on the last lap of races to full-scale post-race fistfights on pit lane.

At Texas, Brad Keselowski and Jeff Gordon had some late race contact after a restart that escalated post-race after Kevin Harvick shoved Keselowski closer to Gordon..

Gordon fell back and, after Phoenix, would be eliminated from Chase contention.  He confronted Keselowski after the race.

“The way he [Keselowski] races, I don’t know how he’s ever won a championship and I’m just sick and tired,” Gordon said.

One position to make the final round

Emotion and high risk were still present as at the next race in Phoenix, Ryan Newman charged hard into Kyle Larson in the last turn on the last lap in order to gain the last spot he needed for Chase eligibility heading into the season finale at Homestead.

Then at Homestead, Harvick held off a late race challenge from Newman to win his first Sprint Cup title.

“You just really think about everything that's led up to this point, this is what we race for,” Harvick said. “You show up to race for the Sprint Cup championship trophy, and to be able to come here in our first year with Gene [Haas] and Tony [Stewart] and Rodney [Childers] and all these guys on the team, you really have been able to experience something that you don't get to experience very often,” Harvick said.

Robin Pemberton, VP of Competition for NASCAR, was one who was glad the new format worked in its first year.

“You go back 10-11 months ago with everybody working on the Chase format, to have things come out the way they did,” Pemberton said. “Even though I heard some shallow comments like, ‘if only you could get guys to race that hard all year long, but if you go back and look at the races all year long, they raced hard. It was hard racing throughout the entire field,” Pemberton said.

“I think this Chase is about the best thing that has happened to this sport over the last decade. This is probably going to shorten the drivers’careers because it’s been so stressful,” Harvick said.

NASCAR new Chase a return to the mindset of days long past?