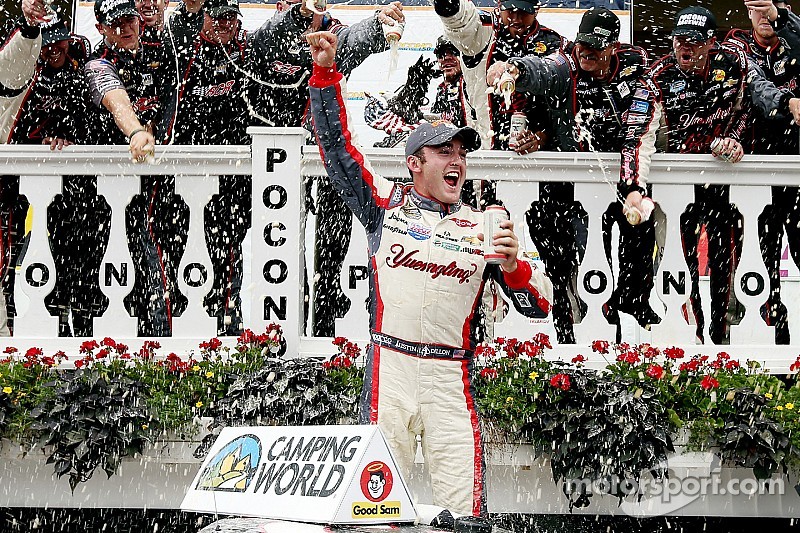 Austin Dillon held on after a GWC to win the NASCAR Camping World Truck Series race at Pocono.

Austin Dillon ended Toyota's string of consecutive NASCAR Camping World Truck Series wins that stretched back to the end of the 2013 season on Saturday by taking the checkered flag in his No. 3 Richard Childress Racing Chevrolet to win the Pocono Mountains 150 at Pocono Raceway in Long Pond, Pa.

I've got to thank Johnny Sauter

The No. 98 ThorSport Racing Toyota of Johnny Sauter finished second, and Joey Coulter was third in the No. 21 GMS Racing Chevrolet.

In a fill-in role, Clint Bowyer drove the No. 05 Athenian Motorsports Toyota to a fourth-place finish after a hard-fought battle. John Wes Townley was originally scheduled to drive the No. 05, but was sidelined by an injury suffered in a wreck in ARCA qualifying on Friday.

Dillon took the lead from Bowyer on a restart with fewer than 10 laps remaining of the scheduled 60-lap distance and held him off on two additional restarts, one with three laps remaining and then on a Green-White-Checkered to claim the win.

"I've got to thank Johnny Sauter," Dillon said. "We chose the top and Johnny did a great job pushing me."

Dillon started on the outside when given the option, and on the final restart got a push from from Sauter to get out in front of Bowyer to maintain his lead. Sauter then moved into second as Bowyer dropped back to fifth.

"We were fortunate to be in that spot (in the outside line)," Sauter said.

There's nothing to talk about.

Bowyer was able to regain one of those spots, getting back by the No. 29 Brad Keselowski Racing Ford of Ryan Blaney on the final lap. Blaney wound up fifth.

The No. 32 Turner Scott Motorsports Chevrolet of Kyle Larson started on the pole and ran up front until the first caution came out on lap 17. Larson gave up the lead to pit, while Dillon and three others opted to stay out, sticking to a single pit stop strategy.

Larson re-inherited the lead when Dillon headed for pit road at the halfway point of the 60-lap race, but soon after everyone cycled through pit stops, handing the lead over to Bowyer, with Dillon in second. Soon after pitting, Larson suffered an engine issue but was able to continue. He would finish 18th.

"Obviously, we were a third-place truck," Bowyer said. "Larson was the class of the field. Luckily, he blew up and gave me and Austin a chance."

The third caution of the race came out in the final 10 laps when The No. 19 Brad Keselowski Ford of Tyler Reddick made hard contact with the wall after contact with the No. 77 Red Horse Racing Toyota of German Quiroga.

A few laps later, the final yellow flag flew when Reddick, in a move of retaliation, turned Quiroga. As a result, Reddick was parked and then called to the NASCAR hauler to speak with officials. After the race when Qurioga was asked if he would talk to Reddick, he sharply replied, "there's nothing to talk about." "He can watch TV, see the replay and he can judge for himself."

The essence of NASCAR captured in a single dirt race