Brett Moffitt did it again.

Moffitt backed off slightly from leader Johnny Sauter and then moved alongside of him off Turn 4 and poked the nose of his No. 16 Toyota ahead at the checkered flag to claim the win.

“Man, I knew Johnny was fast and our Toyota engine, we lacked a little bit of raw speed today so I was really waiting to time it,” Moffitt said. “Pretty amazing this little team has gone to Victory Lane four times this year.

“Through the whole lap or so before, I was running behind (Sauter) and I was running wide-open and I would push him with the air bubble in the center of our bumpers. I tried to back up once and let him get out there a little bit.

“I knew (John Hunter Nemechek) would get through the field and push us. But I played it right and timed it right. Man, it’s just great to get here.” 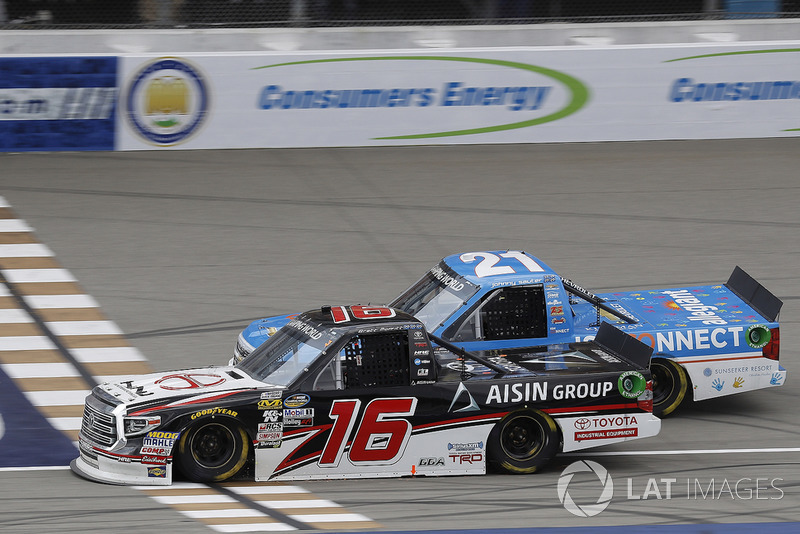 Moffitt won at Michigan two years ago with a three-wide, last lap pass.

The win is Moffitt’s fourth of the season and fifth of his career.

Myatt Snider spun on the frontstretch after contact with Dalton Sargeant with 22 of 100 laps remaining to bring out a caution in the middle of green-flag pit stops.

Then-leader Stewart Friesen was in the process of doing his spit stop at the time but was penalized for improper fueling and had to restart at the rear of the field.

When the race returned to green with 17 laps left, Gragson led the way followed by Gilliland, Moffitt, Sauter and Tate Fogleman.

Gilliand got around Gragson for the lead with 16 laps remaining as Moffitt moved into second and Gragson dropped to third.

With 13 to go, Sauter made a move going from third to the lead in one pass as Moffitt remained in second and Gilliland dropped to third.

With 10 to go, Sauter held a small advantage over Moffitt with Gilliland and Nemechek battling for third.

Grant Enfinger came out on top of a side-by-side one-lap battle with teammate Snider to capture the Stage 2 victory.

“I don’t know if we’re the best truck out here but we’re definitely one of the best trucks,” Enfinger said during the break. “I think we have what it takes to win.”

Moffitt finished third, Gragson – who took four new tires on the pit stop prior to the restart – was fourth and Austin Wayne Self completed the top-five.

Following the break between Stages 1 and 2, Moffitt elected not to pit and took over the race lead when the race returned to green on Lap 26. He was followed by Gilliland and Friesen, who both took fuel only.

On the restart, Enfinger went low in Turn 3 and claimed the race lead for the first time as Moffitt dropped to second.

On Lap 28, Matt Mills wrecked in Turn 2 and backed his No. 54 Toyota into the wall to bring out a caution. On the restart with seven laps left in the Stage 2, Enfinger led the way followed by Moffitt and Ben Rhodes.

With five laps to go in the stage, Justin Fontaine spun and then hit the Turn 2 wall to bring out another caution. Several drivers from fifth on back elected to pit, several just for fuel.

The race returned to green with one lap remaining in the stage and Enfinger still in the lead.

After a daring move to take the lead, Friesen held off Nemechek to take the Stage 1 victory.

It’s the fifth stage victory of the season for Friesen. “I’ve loving my truck right now, hopefully we can back up this run,” Friesen said during the break.

Gilliland was third, Gragson fourth and Enfinger completed the top-five.

Nemechek, the pole winner, led the first four laps before Gragson made his way around him and into the top spot on Lap 5.

With 13 laps remaining in the first stage, Gilliland got around Gragson to take the lead for the first time as Nemechek dropped to third.

On Lap 12, Nemechek closed back to second and then passed Gilliland to retake the lead.

With seven laps remaining in the stage, Stewart Friesen used lapped traffic to go three-wide and navigate around Nemechek in Turn 1 to take the lead for the first time in the race. Gilliland fell to third.

Four trucks had to start the race from the rear of the field – Justin Haley and Fogleman for an engine change and Spencer Davis and Matt Crafton for making tire changes since qualifying.