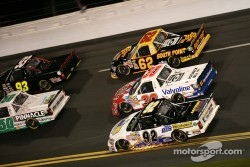 RBR at Darlington: RBR Enterprises has one previous start in the NCWTS at Darlington Raceway. Last season, the No. 92 BTS Tire and Wheel Distributors/fleetHQ Chevy started 20th in the Too Tough to Tame 200 and finished 16th.

Last race recap: The No. 92 BTS Tire and Wheel Distributors/fleetHQ team qualified 13th for the Lucas Oil 150 at Phoenix two weeks ago. Rogers kept the truck on the lead lap all night and finished 16th.

On Darlington: “Darlington is a great track with lots of history. In 23 years of racing, I have never had the opportunity to race there so I am looking forward to checking it off my list. I got to check Daytona off my list earlier this year and we had a good finish. I hope we have the same type of finish here at Darlington. “

On the new NASCAR points system: “With the way this new points system is set up, we can stay up front if we can keep the truck in the top-10 race in and race out. With this small team, we kind of have a David and Goliath thing going against these teams that are essentially (Sprint) Cup teams running in the truck series.

On Darlington: “Darlington is a tough old track and it’s always home to some good racing. This is our biggest event of the year. We have been involved with racing just down the road at Myrtle Beach for a long time so I hope we have a lot of supporters here on Saturday night cheering on the No. 92 Chevrolet. “Heading back to Darlington with what we learned here last year, our goal is to finish in the top-10 and anything better than that is icing on the cake.”

On his team’s early season run: “We have a good group of guys around (driver) Clay (Rogers). We know we are an underfunded team going up against a lot of these big names, but we are well prepared and our team is always ready to go racing. We don’t show up not to run well.”