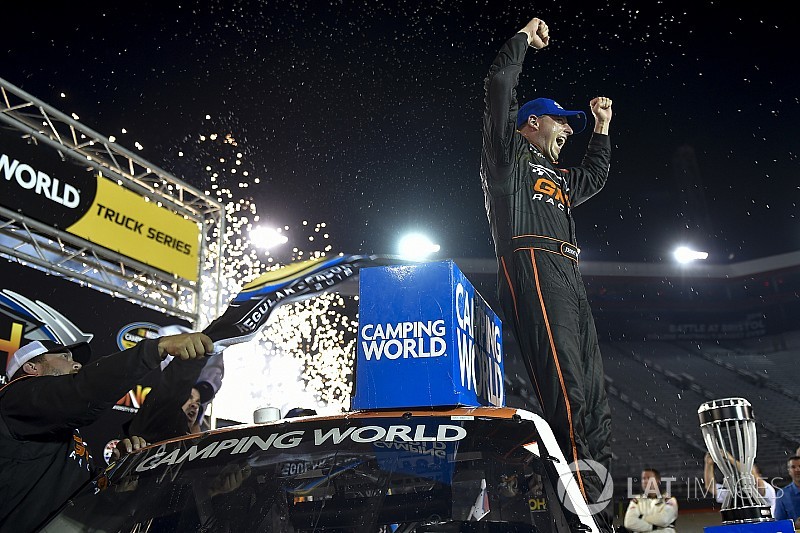 The win is his series-leading fifth of the year, 22nd of his career and first at Bristol. Sauter will enter the 2018 playoffs next weekend at Canadian Tire Motorsport Park as the No. 1 seed.

“I’m so proud of this team,” said Sauter. “I knew we had a great truck today. What a way to cap off the regular season with a win. I had to race really hard with (Stewart Friesen) there for a while which was exciting.

Nemechek ran out to a more than seven-second lead to cruise to the Stage 2 victory over Sauter. Just as he took the checkered flag, Myatt Snider wrecked entering Turn 1 after making contact with Gragson.

Following the break between Stages 1 and 2, Nemechek and Dalton Sargeant elected not to pit and restarted the second stage on Lap 67 in the first and second positions, respectively. They were followed by Sauter, Moffitt and Bell.

On the restart, Jesse Little and Gilliland made contact exiting Turn 4 to bring out a caution. Gilliland was held a lap by NASCAR for pitting outside his box during pit stops.

On the restart on Lap 74, Nemechek remained in the lead followed by Moffitt and Kligerman.

With 25 laps remaining in Stage 2, Nemechek had moved out to a 2.7-second lead over Moffitt. Kligerman remained in third, followed by Sauter and Friesen.

With 15 laps left in the stage, Sauter moved into the third position. Two laps later he moved into the runner-up position, more than six seconds behind Nemechek.

Nemechek easily held off Sauter to take the Stage 1 victory.

Bell, who started on the pole, took early command of the race and had already moved out to almost a one second lead 10 laps into the event.

Scott Lagasse Jr. went around on Lap 13 on the frontstretch which brought out the first caution of the race. On the restart on Lap 20, Bell led the way followed by Nemechek and Rhodes.

Cory Roper spun on the exit of Turn 2 to bring out a caution on Lap 26. On the restart on Lap 32, Bell remained out front followed by Nemechek and Enfinger.

Nemechek powered around Bell on the outside exiting Turn 4 on the restart lap to take the lead for the first time in the race.

With 20 laps left in the stage, Nemechek held a small advantage over Enfinger as Sauter moved into third.

With 10 laps to go, Nemechek opened up a more than 1½-second lead over Sauter.

Drivers Jordan Anderson and Austin Wayne Self both had to start the race from the rear of the field for making approved adjustments to their respective trucks following qualifying.