Second Time Around: Parker Kligerman will travel to Bristol Motor Speedway this Wednesday night, just four days after the 22-year-old driver made his first start with the No. 7 Red Horse Racing team. After starting 11th, Kligerman kept his Toyota Tundra clean and raced well within the lead pack most of the afternoon, claiming a fourth place finish at Michigan. This weekend, Kligerman hopes he can continue the momentum and come away with a strong finish in the NCWTS 200. 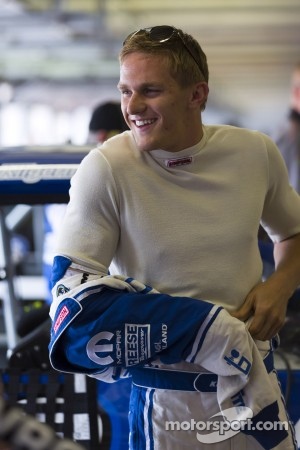 Kligerman has competed at the stadium-style short track just one previous time in the NASCAR Camping World Truck Series, but has two NASCAR Nationwide Series starts to his credit as well. In all three appearances, Kligerman has left with top-10 finishes.

"So far I've been pretty successful there with a top-10 finish in every start, both Nationwide and Trucks, so I look forward to improving on that and hopefully getting up front and challenging for the win," Kligerman commented.

During the summer months, the very top groove of the track was resurfaced to change the characteristics of the racing. Those changes may be an adjustment during the race, but Kligerman is prepared for more close proximity racing.

"From what I've heard it won't change it tremendously, but the new track surface will have an effect on the third groove, which is a groove I found that I could use pretty successfully. You used to be able to go up there and find a lot of grip. I think you'll just see a lot more close quarters racing with the lack of that groove and even a little more contact and rough and tumble like we used to see in the old Bristol."