A new name for NASCAR Busch Series fans to get to know: Jorge Goeters! The Mexican racer has done a stint in the former Indy Lights series plus Goeters races in the Corona Mustang Cup and the Mexico Truck Series events. He knows his way around the ...

A new name for NASCAR Busch Series fans to get to know: Jorge Goeters! The Mexican racer has done a stint in the former Indy Lights series plus Goeters races in the Corona Mustang Cup and the Mexico Truck Series events. He knows his way around the 2.518-mile Autodromo Hermanos Rodriguez road circuit in Mexico City, Mexico -- his hometown track. 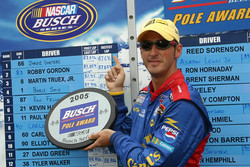 Pole winner Jorge Goeters celebrates.
Photo by Luis Jesus Ramirez Velasco.
"This is amazing for me, for Mexico, for my home here and my family," commented a very happy Goeters. "I want to thank the NASCAR family to have me be able to start my very first NASCAR Busch race. I am very excited to have the pole. We shall see what we do tomorrow."

On Saturday, the Brewco Racing Canel's/Scotia Bank Ford Taurus driver did a one-lap average speed of 103.366 miles per hour in a time of 1:27.696 to steal the pole for the inaugural Mexico City Busch event.

"This is the happiest day of my life," added Goeters.

Robby Gordon was second fastest at 103.174 mph; however the veteran driver will have to start at the end of the pack for Sunday's Telcel Motorola 200. Gordon and his team have to make an engine change before the start of the race tomorrow.

"We almost got it," said Gordon. "That's OK. We have to drop to the back anyway. We are just going to have to race our way to the front. It's an 80-lap race. There is a little bit of give and take. My strategy is to be along for the long haul."

"I'm pretty happy about that (lap)," said Truex. "I've beat some really good road racers and I wanted to be in the top 10 and this is way beyond that. I'm just real proud of these guys. I'm real happy." 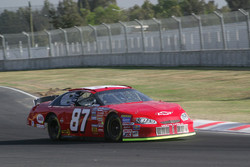 Ron Fellows.
Photo by Luis Jesus Ramirez Velasco.
"I kind of messed up in Turn 1 a little bit and I just really struggled with the lap," Fellows said. "So, it is what it is. It's great for Jorge (Goeters) here in Mexico. If we get a race in Canada, maybe it'll be my turn (laughs). The guys have done a great job on our Chevy Monte Carlo. But 80 laps at this place is going to be a long time based on what we've seen in practice."

Local hero Adrian Fernandez who was fastest in the final practice on Friday, hit the wall on his qualifying lap, but did complete the lap and will start from the 40th position. The Indy Racing League team owner and former open-wheel driver missed the IndyCar season opener to help draw out the fans, along with other Hispanic drivers, for the first ever NASCAR race in Mexico.

"I went out and the car was very loose," said Fernandez. "I've never had a car like that. I was trying to do a quick lap and I probably pushed the car too much. I was surprised because the car has been so consistent all weekend. But we'll still have another car, a great car, and tomorrow we should be fine." 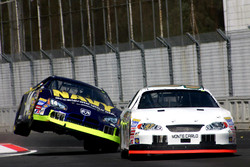 David Stremme goes airborne.
Photo by Luis Jesus Ramirez Velasco.
Several teams experienced bad mojo during practice on Friday on the unfamiliar terrain. Jamie McMurray, Carl Edwards, Michel Jourdain, Jr. and several other racers smacked their primary race cars into the wall and had to scramble for rides for the rest of the weekend.

Most teams did not bring a back-up road course car to this event. McMurray borrowed a car from the No. 41 team while Edwards will use his California car. Racers encountered the most trouble entering turns 7 and 8 where high speeds entering the corners saw many cars loose control.

Tomorrow will see the green flag fly after the words, "Pilotos, enciendan sus motores". The race will be shown at 3:00 pm EST on the Fox Television Network.