Logano wins as Keselowski spins in Xfinity thriller at WGI 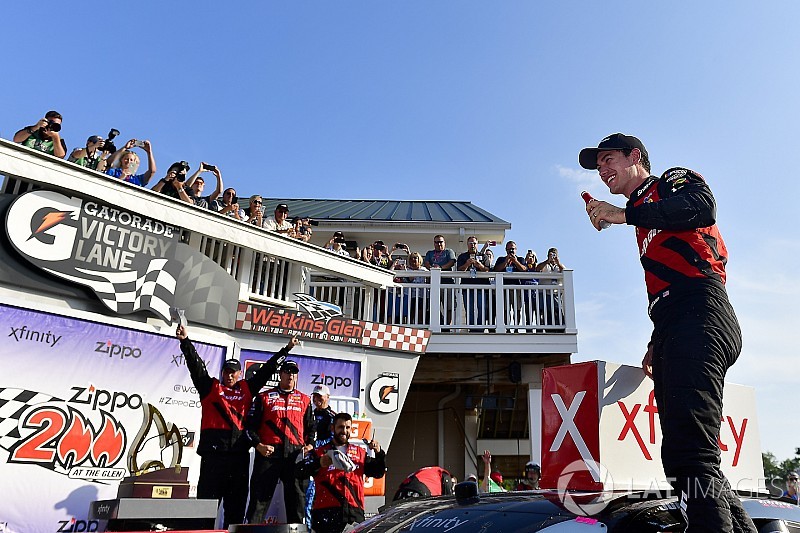 In a duel of Team Penske teammates, Joey Logano came out on top at Watkins Glen (N.Y.) International.

Logano and teammate Brad Keselowski were battling nose-to-tail for the lead when Keselowski spun out in Turn 1, allowing Logano to pull away for the win in Saturday’s Zippo 200.

It’s his third NASCAR Xfinity Series victory at the Glen in his last four starts. It’s also Logano’s second series win of the season and 30th of his career.

“Man, that was all I had,” Logano said of battling Keselowski. “I thought (our newer) tires would have been enough. I was faster than him. I got a good restart to get in front of him but he just dogged me.

“It was a good car, though. It felt good to be able to race each other, it was cool to see two Penske cars doing that. Unfortunately, he couldn’t get second.

“I’m excited about it and a little out of breath.”

A final round of green-flag pit stops was completed with 20 of 82 laps remaining in the race with Keselowski cycling back into the lead followed by Kyle Larson, Preece, Cole Custer and Almirola.

With 15 to go, a full-course caution was displayed when Josh Bilicki came to stop on the track in the area of Turn 1.

The race returned to green with 13 laps left with Keselowski in the lead, followed by Larson and Preece.

Scott Heckert’s car lost power on the entry to Turn 6 with 11 to go, which brought another caution. When the race returned to green with eight to go, Keselowski held the lead followed by Preece and Logano.

With four laps remaining, Keselowski had moved back up to Logano’s rear bumper and began challenging again for the lead.

With three to go, Keselowski spun out entering Turn 1 while battling for the lead as Allgaier moved into the second position and Allmendinger had rallied to third.

Allmendinger held off Allgaier while both ran on rain tires on a quickly-drying track to claim the Stage 2 win.

Larson was third, Christopher Bell was fourth and Daniel Hemric completed the top-five.

Following the break between Stages 1 and 2, Keselowski stayed out and took over the race lead when Stage 2 went to green on Lap 25. He was followed by Allmendinger and Almirola.

During pit stops, Preece and Austin Cindric were penalized for speeding on pit road while Tyler Reddick was penalized for having a crew member over the wall too soon.

On Lap 26, Justin Haley and Matt Tifft wrecked in the esses to bring out a full course caution, just as light rain was reported around the course.

Rain picked up during the caution and NASCAR ordered pit stops for wet weather conditions, as all of the cars pit for rain tires.

When the race restarted on Lap 33, Keselowski continued to lead followed by Allmendinger, Almirola, Elliott Sadler and Logano.

Allmendinger quickly moved into the lead after the restart with Allgaier moving into the runner-up position.

On Lap 35, Vinnie Miller drove through Turn 1 and straight into the tire barrier to bring out another full-course caution. The race was red-flagged shortly after the incident for nearly 10½ minutes to make repairs to the tire barrier.

Several teams, including Keselowski, elected to put on regular tires under caution as the track continued to dry quickly.

The race returned to green with two laps remaining in the stage.

Logano led all 20 laps and easily held off Larson to claim the Stage 1 victory.

Logano, the pole winner, grabbed an early advantage, leading the first three laps until a caution was displayed after Tommy Joe Martins slammed into the wall off Turn 6.

Only a handful of cars elected to pit under the caution. On the restart on Lap 8, Logano continued to lead followed by Keselowski and Larson.

With 10 laps remaining in the first stage, Logano held a slight advantage over Keselowski, followed by Larson, Allmendinger and Hemric.

Austin Dillon drove through the inner-loop on Lap 9 but did come to a complete stop so no additional penalty was required. He dropped to 15th after rejoining the field.

With five laps left in the stage, Michael Annett made a pit stop but was penalized for driving through too many pit boxes while exiting.

Bell elected to pit with four laps left in the stage but was penalized for having a crew member over the wall too soon.

With two laps to go, several drivers, including Sadler, Allmendinger and Keselowski, elected to pit.

With one to go in the stage, Cindric spun off course in the inner-loop but was able to continue on.

Before the start of the race, 11 cars had to move to the rear of the field – Tyler Reddick and Miller for changing tires; Heckert, Brandon Jones, Alex Labbe, Ryan Sieg, Bilicki, Kaz Grala, Spencer Boyd and Brian Henderson for unapproved adjustments; and Cindric for using a backup car.