Allgaier will be running for the championship in the NASCAR Nationwide Series with the support of BRANDT. The agricultural company returns as primary sponsor for at least 26 of the 33 races in the 2013 NASCAR Nationwide season.

BRANDT, a leading agriculture retailer and manufacturer of agricultural specialty products, announced today its return to Turner Scott Motorsports as the primary sponsor of the No. 31 BRANDT Chevrolet driven by championship contender Justin Allgaier. BRANDT is committed to being the primary sponsor for at least 26 of the 33 scheduled NNS races in 2013. 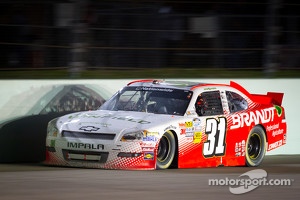 BRANDT President and CEO Rick C. Brandt anticipates that 2013 will be a big year for BRANDT, as it marks the company's 60th anniversary.

"2013 is a big milestone for our family-owned company," said Brandt, "What better way to celebrate than to run for the NASCAR Nationwide Series championship with Justin Allgaier and Turner Scott Motorsports? Returning as the primary sponsor with Justin shows our commitment and dedication to our motorsports marketing program, the same commitment and dedication we have shown to our customers, employees and the agriculture industry over the past 60 years. This is a year to celebrate our past 60 years, but also set the foundation for our future."

In 2012, BRANDT promoted an "all agriculture car," and 2013 will see the continuation of that concept. The "Ag Car" spotlights the hard work and value of the agriculture industry, as well as the challenges it faces to feed the world as our population continues to grow. The National FFA Organization, The Nutrients for Life Foundation, TradeMark Nitrogen Corporation, Precision Tank & Equipment and WinField all joined the No. 31 Ag Car in 2012.

"Unless you're in the business, you don't know how crucial the agriculture industry is to America and to the world," said Brandt. "By promoting the Ag Car, we're shining a spotlight on the industry and educating millions of end consumers about the important role that the hard-working farmers, growers and other industry professionals play in modern day life."

Turner Scott Motorsports co-owner Harry Scott welcomed BRANDT back on board as an integral part of his NNS program.

"We couldn't be happier to have BRANDT and Justin Allgaier back with Turner Scott Motorsports in 2013," said Scott. "BRANDT has been a fantastic partner with this team and we're very excited to be working with them as they celebrate their 60th anniversary and spotlight the agriculture industry. There is no doubt that Justin and the No. 31 team will be in the hunt for the championship next year. BRANDT, Justin and Turner Scott Motorsports have been a formidable combination and we're looking forward to a very successful 2013."

Allgaier, a Riverton, Ill. native, has made a name for himself coming through the national stock car racing ranks. "Little Gator," a nickname Allgaier earned for his size and aggressive nature behind the wheel, started racing Midget and Sprint cars at age six before moving onto stock cars as a teenager. After capturing the ARCA Racing Series championship in 2008, he graduated to NNS and claimed Rookie of the Year honors with three top-five and 12 top-10 finishes. The 26-year-old scored his first NNS victory in 2010 at Bristol Motor Speedway and rounded out the season with two pole awards, eight top-five and 20 top-10 finishes. Allgaier finished the 2012 season sixth in the NASCAR Nationwide Series (NNS) championship point standings, notching a win in the NAPA Auto Parts 250 in Montreal, Canada.

"I am so excited to come back with BRANDT on my car," said Allgaier. "I've known the people at BRANDT for years and I could not be more proud of representing them on and off the track. They are a family-owned business with literal roots in my home community. I think that championship trophy will look incredible in their headquarters lobby!"