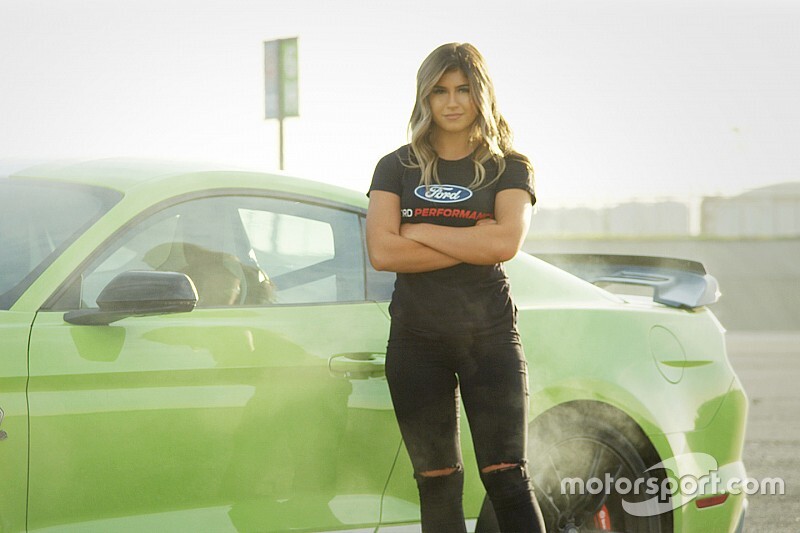 Hailie Deegan saw many benefits in joining Ford’s NASCAR driver development program but the biggest may be the opportunities still to come.

Ford Performance announced Tuesday that it had signed Deegan to a multi-year driver development deal that will utilize a patient and comprehensive approach to continue her progression through the NASCAR ranks.

Deegan, 18, is the daughter of Brian Deegan, a motocross rider, off-road racer, and former X Games athlete who had his own successful history racing Fords.

Hailie Deegan grew up racing off-road and on dirt but transitioned to competing on asphalt in 2016 to pursue a career in stock car racing. Her NASCAR journey began in its K&N developmental series with backing from Toyota.

Coming off her most successful season yet with a pair of victories, Deegan said the time could not have been better to expand her racing resume and with a manufacturer that has a history with her family.

“I’m super excited to kind of rekindle the relationship my dad had with Ford, bring that back to our lifestyle, what we have going on,” Deegan said. “It’s a matter of timing deal.

“Over the years I got aligned with Toyota, but now I thought the right path for me was coming back to Ford, how my dad’s relationship started there. I think it definitely was a smart move on all of our parts.”

Deegan’s 2020 racing plans will include running a full season in the ARCA Menards Series with DGR-Crosley, driving the No. 4 Ford Mustang. She will also compete in select events in the Mustang GT4 with Multimatic Motorsports in the IMSA Michelin Pilot Challenge.

Deegan hopes to run several races in the NASCAR Truck Series before the end of the year. She’ll get an early start by participating in ARCA and IMSA testing at Daytona International Speedway next month.

The multi-series approach to her racing, combined with the sim resources available at the Ford Performance Technical Center in Concord, seemed to make a big impression on Deegan.

“I think with my alliance with Ford, we’re focusing on being in really good equipment and having really good outside resources, not just a ‘write-the-check-to-go-race’ deal,” she said. “It’s developing, making me a better driver going to the IMSA racing with sim time, stuff like that.

“I think true development is not just writing a check to go race. I think it’s all around making you a better driver as a whole.

“At the Toyota side, there’s a lot of drivers over there. There’s not many rides open in the higher levels. Over here, there’s a lot more focus and a lot more clearer path on what they’re trying to do with their development drivers, their drivers coming through the ranks (and) having enough seats for them.”

One thing that Deegan said she will have a difficult time with is patience. She wants to race as much as possible and admits she wouldn’t mind if her progression went faster.

“It’s been really hard, especially when I went to ISM Raceway in Phoenix. It was so hard for me because my teammate at (Bill McAnally Racing) was racing the Truck race and I was sitting on pit road and I was like, ‘Man, if he can do it, I want to do it,’ ” she said.

“That’s something hard for me to hold back and be like, OK, let’s race ARCA, let’s gain experience, let’s get better so I know when I’m there I’m not nervous that I’m not ready.”

Deegan’s father, Brian, believes her daughter has done a good job of being patient with the development process.

“She’s happy so long as her car is competitive and she feels like she has a chance to win. I think she would be OK racing at the local go-kart track like that,” he said. “As long as that’s there, I think we’ll be fine down in the lower series.

“I’m scared to say, ‘Let’s just jump to Trucks.’ OK, she’s going to go out and run mid-pack or run 10th, whatever the case is, but that’s not the same as ‘I have a chance to win today.’