Like the Army Strong Soldiers they represent, Brown and Schumacher carried a “never accept defeat” attitude into round 13 of the 23-race NHRA Full Throttle Drag Racing Series. The Denver-area stop marked the first leg of the NHRA’s three-race “Western Swing” which also includes stops in Sonoma, Calif. and Seattle the next two weekends.

Brown banked his third victory of the season after he squeaked by Brandon Bernstein in the final, while Schumacher lost a close race to ninth-place qualifier Khalid alBalooshi in the first round of action 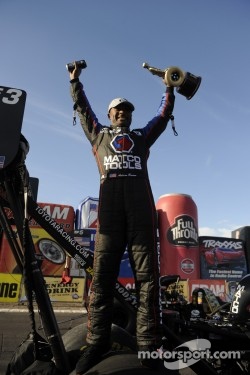 “That was such a close race,” Brown said with a sigh of relief. “To be honest, I didn’t really know who won given how close he was to me at the finish line. Thankfully, I looked over and saw my win light on. As always, we win for our Army Strong Soldiers. We strive to be everything that they are – the best in the world.”

On the way to his meeting with Bernstein, Brown had to maneuver around the likes of Rob Passey, Bob Vandergriff and Steve Torrence. The quarterfinal-round race against Vandergriff proved to be especially challenging.

“We dropped a cylinder early on and I saw him out in front of me, but he started having issues and I was able to get on by,” Brown said. “I would say that was our lucky round right there. You usually have at least one of those when you win one of these deals.”

After claiming his 18th career Top Fuel victory and his 34th career win (counting his days in Pro Stock Motorcycles), Brown moved into second-place in the standings behind his Don Schumacher Racing teammate Spencer Massey.

“It was a great day here on the mountain,” Brown said. “We’re only 11 points behind Spencer, so we’re well within striking distance going to Sonoma. I can’t wait to get out there.”

Following the Denver victory, Brown placed himself in position to nail another “Western Swing” sweep. In 2009, he became only the fifth Top Fuel driver to accomplish that task. The others are Schumacher, Joe Amato, Larry Dixon and Cory McClenathan.

“It would be nice to do it again, but we’re really not thinking about that right now,” Brown said. “We’ll be starting from scratch once we get to Sonoma and everyone is going to be shooting at us. Should we be able to win there, then we can start dreaming about finishing it off in Seattle. At the moment, we’re only one-third of the way there.”