Brown aims for victory at Four-Wide Nationals in Charlotte

Matco Tools' Brown knows how to win at zMAX, yet to master 40,000-horsepower Four-Wide event

BROWNSBURG, Ind. (April 17, 2013) - This weekend's NHRA Mello Yello Drag Racing Series event is without question the most unique on the 24-race circuit. 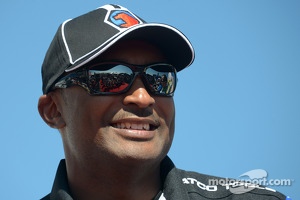 The Dollar General NHRA Four-Wide Nationals sounds easy enough to understand: Instead of the traditional two-car races at other pro tour events, at zMAX Dragway at Charlotte Motor Speedway, the Top Fuel and Funny Cars will line up four abreast for each qualifying session on Friday and Saturday, and championship elimination rounds on Sunday.

While it obviously is sensory overload for the zMAX crowd when a combined 40,000 horsepower ignite at once - that's more power than an entire 43-car field of a NASCAR Cup stock car race - it poses unique challenges for nitro drivers.

"The Four-Wide is something we do only once a year, and it's a challenge for the drivers and the crew chiefs," said Antron Brown, driver of Don Schumacher Racing's Matco Tools Top Fuel Dragster.

"The biggest difference is on Sunday when we have to think about the other three cars pre-staging and staging, and you can never give up on the race in the first two rounds because the top two move on."

There is no comparable display of horsepower on the planet, and each year drivers become more familiar with the format. The pressure on drivers, crew chiefs and crew is even greater because the Four-Wide awards the same championship points as the other 23 events.

"If you get stuck in one of the two middle lanes you have to have an extra sense of focus and not let the noise on both sides get to you," said Brown, the reigning NHRA Top Fuel champion who won the traditional two-wide event in 2011 and was runner-up in 2008 but hasn't mastered the Four-Wide.

"There's a lot more rumbling, a lot more noise. You have to be poised. You have to go out and throw down your best shot at what the track's capable of holding and hope it sticks.

"In the Final, it's a free for all. All four teams take their best shot and whoever lands it will win it.

"You can't give up if you get a little tire shake. You have to really be smart about getting the car back. If you see two other cars way out in front of you there isn't any need to get ridiculous and do anything crazy. But if you don't see anyone in front of you then you have to do whatever it takes to get to the finish line to get that win."

Brown, 37, trails DSR teammate and points lead Tony Schumacher by 14 after four of 24 events on the pro tour. Brown, who lost to Schumacher in the championship round two weeks ago at Las Vegas, earned the 38th title of his career on March 17 at Gainesville, Fla., when he won the 200th NHRA title for team owner Don Schumacher.

Goals are clear-cut for Coughlin and crew in Charlotte