Enders and Elite ready to win again with Chevrolet 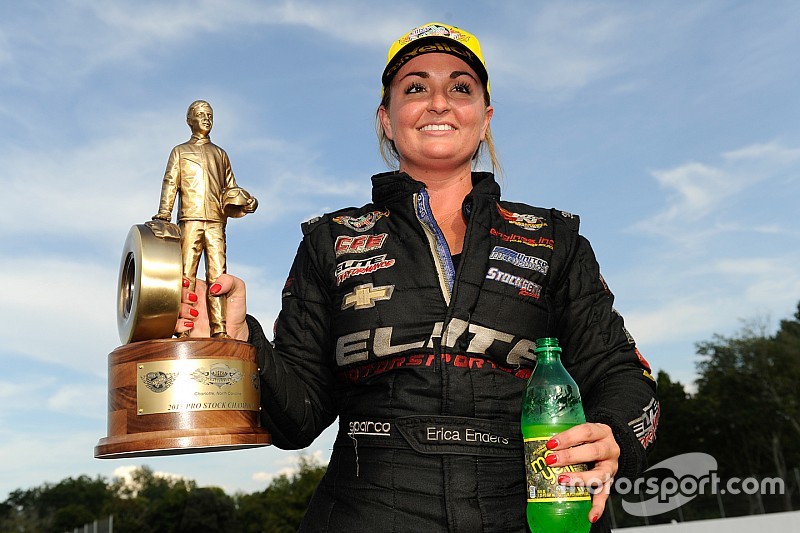 Erica Enders' 2016 slump in form wasn't of her own making, but she drew positives from it and believes that Elite Motorsports is now ready to once more take on the best in NHRA Pro Stock. Anne Proffit reports.

The 2016 NHRA Mello Yello Drag Racing Series season was a character-building 24 races for two-time and defending Pro Stock champion Erica Enders. Coming off a pair of seasons in which she wrapped the title, if not with ease then with character, Enders came into 2016 with a new car and new rules to follow.

Her Elite Motorsports team’s decision to switch from Chevrolet Camaro to Mopar Dodge Dart chassis and engine came well before NHRA changed the ground rules for her class. At the time the choice was made, both Mopar and Elite expected rules for the 2016 season to be similar to what they’d run for the previous few years. Engine builder Nick Ferri had experience with Mopar power when he worked with teammate Jeg Coughlin Jr. Surely this would be just fine?

Not exactly. In late July 2015, NHRA announced it was finally changing the Pro Stock class from carbureted engines to electronic fuel injection (EFI) for 2016. The sanctioning body also brought in limits to engine speed, forcing them to rev only to 10,500 rpm. At the time, most were using a self-imposed limit right around 11,000 although some, like Summit Racing (Jason Line and Greg Anderson) were hitting well above that number.

The change, for Elite and so many of its rivals, would not be easy. Elite had – somewhat inadvertently – bitten off more than it could chew and the final results for the year were evidence of that. By way of stark contrast, despite complaining about the imposed changes more than anyone in the Pro Stock paddock, Summit Racing went on to win the first 13 races of the season and ended up champions, with Line beating Anderson for the big trophy.

Enders herself describes 2016 as “a challenging year, but what we went through made us stronger. I think what we went through would have torn a lot of teams apart, but it didn’t hurt us at all. Yeah, we were upset we weren’t performing well, but we still joked around, still had fun and we smiled through it all.”

By mid-year rumors floated that Mopar “fired” Elite and others said Elite realized they’d made an error and told Mopar they wanted a release. Only those involved know the full story, but as the Pro Stock season in NHRA lights up next weekend at Pomona’s Auto Club Raceway, Enders, Coughlin Jr and teammate Vincent Nobile – who never left the Chevrolet camp and finished sixth in the season-long standings compared with Enders’ and Coughlin’s P9 and P10 – will all be racing Chevrolet Camaros.

Enders is relieved to be back with a car she knows is competitive, one that Rick Jones Racecars will have prepared for her and one that Ferri has tuned to the maximum allowed.

“Really looking forward to this year with my guys, probably more than any other season,” she said. “The excitement level in our team is really, really high. We know what we can do and we’re ready to get the job done. We’re back to what we know and we are anxious to repeat the success we had in 2014-2015.”

Enders said that the character-building 2016 season at least served to emphasize the Elite squad’s solidarity.

“There is zero ego on this team,” she commented. “It’s easy to be all happy when you’re winning, but the true measure of people comes when times are tough. We’re tough.

“This year is gonna be great because I already know what we’re capable of and so does everyone else. At the same time, I learned we don’t need win lights and trophies to be fulfilled. Being a family, having each other’s backs no matter what, being together through it all – that’s what matters.”

The competition level in Pro Stock will get even higher in 2016 and that could impede Enders’ quest for a third title, but the twice-crowned champion is aiming to compete hard and fast – and not just in this pro category.

She observed: “I’m gonna be busy this year because, aside from Pro Stock, I’ll be racing Buddy Wood’s Super Gas Camaro at a bunch of races and I’m running a COPO [Camaro] in the five shootout races. I’ll be getting a lot of seat time and that’s exciting.”

When the season begins with the Circle K Winternationals on the Auto Club Raceway at Pomona next weekend, February 9-12, Enders and her teammates will find out whether they really are prepared for another 24-race war. All the testing and practice runs down a quarter-mile racetrack can’t compare with real-time competition.