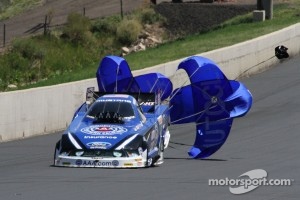 In HIght’s quarter-final race he left on Cruz Pedregon but at the 1/8 mile mark Pedregon’s Snap-On Toyota had pulled around the Auto Club Mustang. At the finish line it was Cruz with a blistering 4.110 to Hight’s impressive 4.150 in the left lane.

“We didn’t give it away in the second round. We came in here trying a new clutch disc. We have enough clutch discs of the set-up we won races with earlier this season. Jimmy wasn’t happy with that. The new set-up is a little friendlier. Neff, Courtney and John are all using this set up. We made a swap so we had a learning curve this weekend. That is why we didn’t qualify better,” said Hight.

“It did respond and come to life to the changes they made on race day. We got the round back we lost in Denver to Capps. My goal for this Western Swing was to not lose any points. We wanted to get three more races out of the way and have the same lead. I feel good about going to Seattle. The car made two good runs today. It wasn’t quite enough against Cruz. If we start out in Seattle like we finished here we will be ahead of the game.”

All the John Force Racing Ford Mustangs held onto their top ten positions even though no one advanced beyond the second round. John Force, driver of the Castrol GTX HIGH MILEAGE Ford Mustang, maintained his hold on the No. 10 position in Full Throttle points and luckily did not lose any ground to No. 11 driver Tim Wilkerson. Both Ford drivers dropped first round match ups. Force has a lead of 69 points over Wilkerson which is the equivalent to four rounds of racing with three races left before the cut-off for the Countdown.

“All three of our cars got behind the eight ball. Courtney stayed up in the top half. She ran 4.05 in qualifying and that only put her fifth. The competition is tough. (Matt) Hagan, a runner-up today, is still out there so we will see what happens. Some of the cars behind us went out early but we will get ready for Seattle,” said Force, the seven-time Sonoma Nationals winner.

Mike Neff and his Castrol GTX Ford Mustang ran into the same problem that hit them in the opening round of qualifying. His Funny Car launched hard but smoked the tires against rookie of the year contender Alexis DeJoria, losing 5.027 to 4.132. Neff will leave Sonoma with a firm grasp of the third position in points.

Auto Club Road to the Future Rookie of the Year front-runner Courtney Force qualified No. 5 to lead the JFR contingent. On Sunday versus 2011 Funny Car world champion Courtney dropped her first round race but only slipped one spot in the points. Her Traxxas Ford Mustang was solid throughout qualifying and her opening round time of 4.160 was nothing to hang her head over.

“We really learned a lot about our Mustang and got a career-best elapsed time out of the race weekend with a 4.05 during Friday qualifying. It was great for us to run a 4.08 in the heat and then follow that up with a 4.05 at night so we’re really looking forward to Seattle. Conditions should be a lot cooler over there and we can have another shot at some good numbers,” said Force, a two-time 2012 finalist

“We didn’t have as good of a weekend we had hoped for, but it’s like my crew chief Ron Douglas told me, we can’t get down on ourselves, we just have to suck it up and move on to next weekend. You know take everything we have learned here and use it to make ourselves better. We learned so much, even just on that first round pass and we’re just going to fix some things and I think we’ll be ready to go in Seattle. I’m really looking forward to it. Not every weekend is going to be perfect.”