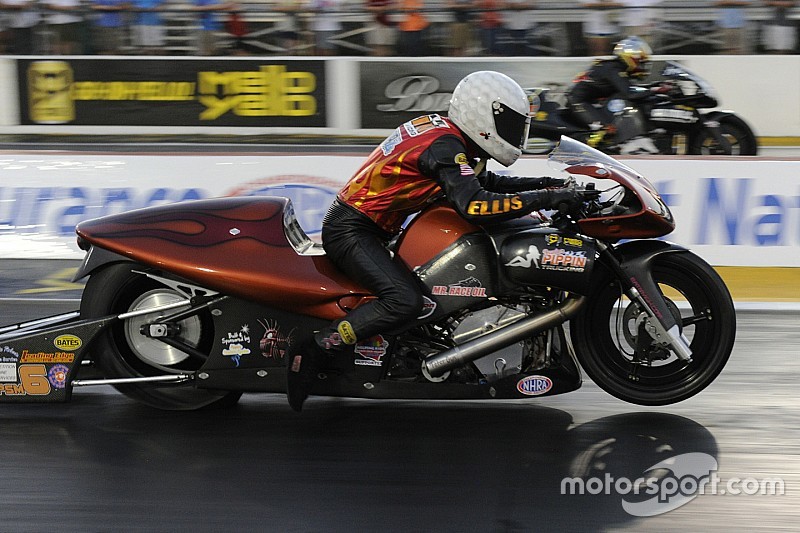 It’s rare that the Vance & Hines Screamin’ Eagle Harley-Davidson team comes under regular threat in NHRA’s Pro Stock Motorcycle division. Current points leader Andrew Hines and teammate Eddie Krawiec have won eight of the last 12 PSM championships, and in any given year, one or both of them set the gold standard.

Their most consistent opponent over this time has been Matt Smith, a three-time champion. But with the return to form of Angelle Sampey (another triple PSM title winner) more opposition to V&H is brewing. The Buell-mounted legend currently lies just two points behind Hines after two rounds of the Countdown to the Championship. Yet given her 42 career victories – second only to Hines in the all-time PSM list – Sampey’s pace is almost to be expected.

More remarkable is the arrival of Chip Ellis as a legitimate championship threat. The 46-year-old Ellis started the Countdown playoff with victory in Charlotte on his Pippin Motorsports Buell, and followed this up with a semi-final appearance at Gateway last weekend.

The win in North Carolina, his first in the category for eight years, means Ellis heads to this weekend’s race at Reading, PA, in third place just 17 points behind Hines.

“I’ve never been as excited as I am now,” Ellis says. “It gave me a lot of confidence and we had a really good race in St. Louis [Gateway]. We’ve been running good, the guys have given me a good bike to ride and it’s absolutely been a lot of fun. There’s a lot of good stuff going on right now at Junior Pippin Racing.”

This form is also a fillip for team owner Junior Pippin who was diagnosed with nasal cancer last year and underwent extensive radiation and chemotherapy. This week, a cancerous spot on Pippin’s lung forced more surgery

Unsurprisingly, his fight has given the team and rider the motivation to give 101 percent.

“There would be nothing more satisfying than to win another race for him,” Ellis says. “He’s just a great guy and a great team leader. We really have a lot of fun as a team.

“We obviously want to do well for him because of the struggles he’s had. When we do well that’s the best medicine he can have.”

Ellis says improved focus has made a tremendous difference during eliminations which is what’s required to succeed in Pro Stock Motorcycle where rider reaction times, rather than bike performance, often decide the winner. Looking ahead to this weekend’s race at Maple Grove Raceway near Reading, Ellis also believes the track may present opportunities for a significant milestone in the class.

“It’s always fast there, the track is good and the air is good,” Ellis says. “We may see somebody go 200mph for the first time and hopefully that will be us. As racers we want to go as fast as we can and this weekend will give us a good opportunity.

“But we’re focused on trying to do everything right. It always seems on Sunday your mind wants to play games with you. If you can take that out of the [equation], you seem much better off. We’re just focused on making good runs.”

Whether that will be enough to defeat Hines, Krawiec and Sampey on average over the final four races is anyone’s guess. But it’s great for NHRA’s Pro Stock Motorcycle category to have an unexpected David among the Goliaths.