It was a performance that would make every Army Strong Soldier proud as U.S. Army NHRA Racing Top Fuel drivers Tony “The Sarge” Schumacher and Antron Brown were spectacular throughout the weekend in the Lucas Oil Nationals at Brainerd (Minn.) International Raceway.

Schumacher and Brown topped the charts in qualifying and surged to the semifinals and final, respectively, today before running into Morgan Lucas, who emerged victorious in Top Fuel. 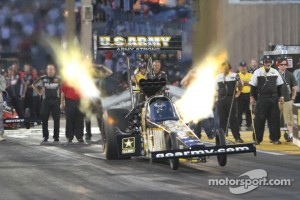 After winning three of the last five events this season, Brown was looking to make it two straight victories at Brainerd, but he came up one round short of duplicating the feats of Joe Amato and Brandon Bernstein, who each have scored back-to-back Top Fuel wins at Brainerd. Brown posted a run of 3.831 seconds at 313.80 mph in today’s final, bested by the winning run of 3.819 seconds at 316.90 mph laid down by Lucas.

“I feel great about this U.S. Army/Matco Tools team,” Brown said following his 70th career final-round appearance and his eighth of 2012. “The competition is so tough and all I can say is that Morgan’s team got it today. We were digging deep in the final round and they just got us. That was a good, old-fashioned NHRA drag race, right there.”

Brown rifled his way to the final by defeating Bob Vandergriff and David Grubnic in the opening rounds. His semifinal victory over Doug Kalitta with a run of 3.812 seconds at 320.05 mph was his first victory over Kalitta in five tries this season. In the final, Brown couldn’t avenge his final-round loss to Lucas earlier this season at the O’Reilly Auto Parts NHRA Spring Nationals April 29 at Royal Purple Raceway in Houston.

“It’s a bummer we didn’t win,” Brown continued. “We love racing here in Brainerd and winning last year here was unbelievable. My hat goes off to every one of my crew guys. We had some problems between rounds but the crew just kept with that never-give-up spirit and worked their hearts out. The car was competitive all weekend long.”

The results of the weekend did push Brown past his Don Schumacher Racing teammate Spencer Massey and into the lead in the Top Fuel standings. It also provided some momentum for the defending U.S. Nationals champion.

“We like being on top, but the focus now is getting ready for the U.S. Nationals,” Brown said. “I like heading into the U.S. Nationals and the Countdown (to the Championship) with a lot of confidence. It’s a great feeling.”

Schumacher’s run to the semifinals began with victories over Terry McMillen and Kalid alBalooshi. The seven-time Top Fuel champion’s charge ended when Lucas posted a nearly perfect run against him. It was Schumacher’s eighth semifinal appearance of the season and third defeat in as many races versus Lucas.

“It’s was a heck of a drag race,” said Schumacher, who earned the pole and set a new speed record of 326.16 mph during qualifying. “We needed to run a little quicker and I needed to leave a little better. (Morgan) had a .050-second light and ran quicker than us, so we got beat on both ends. It would’ve taken a miracle reaction time to beat him, and it would’ve taken a pretty darn good run to win. What they did was a pretty stout run to beat the U.S. Army car.”

The semifinal run was Schumacher’s seventh using the innovative, new canopy on the U.S. Army Top Fuel Dragster. Consistency proved to be his strong suit this weekend as he was in the top-three every run.

“Seven great runs here at Brainerd,” Schumacher continued. “We had a pretty big problem in the second round and they had to change some parts on the car right before we came up for that semifinal run. I’m sure (crew chief) Mike (Green) is wishing we’d run a little faster, and I wish I’d left a little better.”

“The Sarge” leaves Brainerd third in the standings and optimistic heading into the NHRA Full Throttle Drag Racing Series’ 58th annual Mac Tools U.S. Nationals in Indianapolis, the final race before the NHRA Countdown to the Championship begins Sept. 14-16 at zMAX Dragway in Charlotte, N.C.

“I love my U.S. Army car,” said Schumacher, an eight-time U.S. Nationals Top Fuel champion. “I love this group of ‘Soldiers’ I have for a team and I can’t wait to get to Indy.”

The top-five in the Top Fuel standings going into round 17 on the 23-race NHRA Full Throttle Drag Racing Series schedule – the U.S. Nationals Aug. 29-Sept. 3 at Lucas Oil Raceway Park – are below: