Rico Abreu's stock car debut: Not bad, but maybe not what he hoped 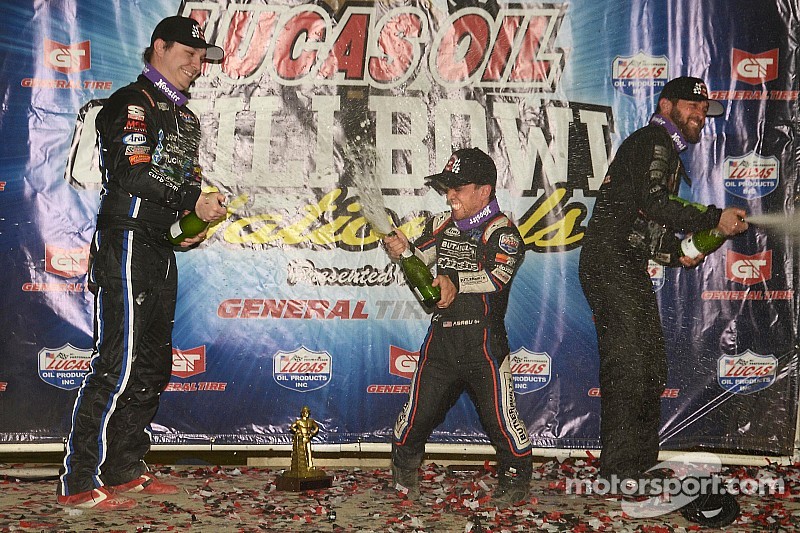 SATSUMA, Florida -- It would be nice to continue 2015 Chili Bowl winner Rico Abreu’s week of pure motorsports magic by reporting that he also won in his very first race in a car with a roof, on asphalt.

What he did do in Saturday night’s Pete Orr Memorial Super Late Model 100 at New Smyrna Speedway was commendable, though, because he managed to keep his number 24 car out of trouble for nearly 90 of the 100 laps, moving from his qualifying spot of 22nd, out of 25 cars, to ninth when the rear end of the car failed and he coasted to the pits.

Considering the fact that the winner of the race and the third-place car were disqualified post-race for left-side weight issues, had Abreu been able to continue, he would have almost certainly finished seventh instead of 13th.

If you are late to the Abreu's Little Big Man story, the 4-foot, 4-inch Rutherford, California driver, after a solid West Coast career racing midgets and sprint cars, has been winning races all over the past couple of years, and won the 2014 USAC Midget title and the respected Belleville Nationals.

All impressive, but what really out Abreu on the big-time motorsports radar was his win one week ago at the Chili Bowl indoor midget race in Tulsa, Oklahoma, over 325 other drivers who were winnowed down over several days of qualifying races to the final 24.

'Greatest race in the world'

Tony Stewart will tell you he ranks his two Chili Bowl victories right alongside his NASCAR Sprint Cup championships. Kyle Larson will tell you what he told us Friday night: “I think the Chili Bowl is the greatest race in the world.” Larson has never won it, by the way. Both drivers are among Abreu’s best friends.

Abreu’s victory fast-tracked his deal to run the NASCAR K&N Series this year, with the season starting at New Smyrna Speedway during February Speed Weeks. So knowing that he had never raced a stock car, and had run only one pavement midget race in his career, Abreu was aware he needed pre-K&N experience, so he entered Saturday’s Pete Orr Memorial at New Smyrna in an entry fielded by a North Carolina team that had won at New Smyrna before.

Abreu just wanted to learn, log laps, stay out of the way, and be able to drive the car back into the trailer at the end of the race. The car broke through no fault of his, but before it did Abreu held his position, learning the car and the track up through about lap 60, when something appeared to click, and he began varying his lines through the corners and going faster and faster.

As the race neared the end, he found himself in 11th, passed a car for 10th place, then 9th, and that’s where he would have finished – plus the two post-race positions he would have picked up through disqualifications. Seventh out of 25 cars on your first stock car race? Not bad at all, even if most of the advancement was made through attrition.

“We got better and better every lap,” he said. “The long runs especially were better for us. I just have to learn to get up on the wheel on the restarts.” As the race progressed, “I moved around more and felt where the car was comfortable. My spotter, Frank, helped me a lot telling me where the line was, and when I turned a good lap and a bad lap.”

“It’s just about getting comfortable. And these aren’t really long races, but they are a lot longer than I’m used to in sprint cars and midgets. I’m planning to come back here and test before Speedweeks. I still have a lot to learn.”

Oh, and who won the race? Dalton Sargeant crossed the finish line first, but was DQed for the weight violation, giving the win to Bobby Good.