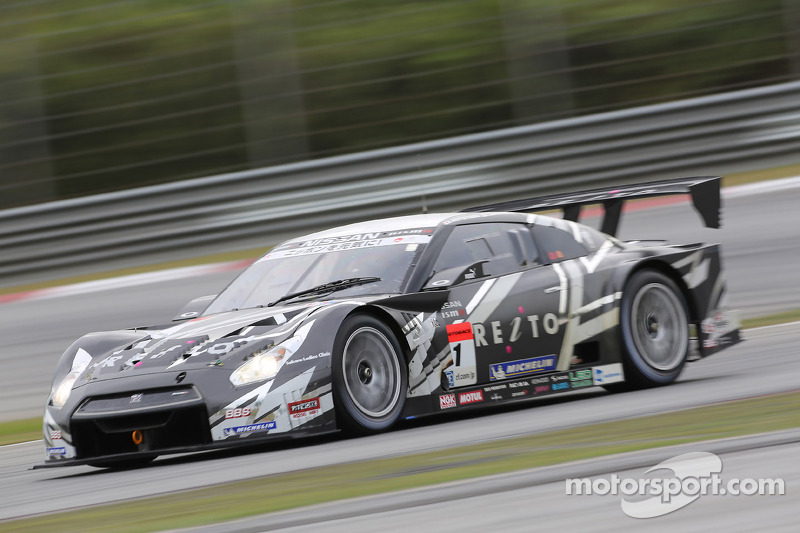 On July 27, the qualifying for the "Sugo GT 300km race," Round 4 of the 2013 Autobacs Super GT, took place at Sportsland Sugo (one lap: 3.704 km) in Miyagi Prefecture. In the GT500 class, the Reito S Road Mola GT-R driven by Satoshi Motoyama and Yuhi Sekiguchi won pole position. In the GT300 class, pole position went to the Subaru BRZ R&D Sport driven by Tetsuya Yamano and Kota Sasaki.

In the morning, there were fears that a light rain would settle in and the circuit was veiled in a bothersome mist here and there. However, by the time the afternoon qualifying sessions were starting, the mist had thinned out and track conditions were relatively good.

From this season, the qualifying system has changed to a 2-stage (Q1 and Q2) knock-out type format in which the slowest qualifiers in Q1 fail to move on to Q2 where the top qualifying places are decided. In the GT500 class, the fastest eight of the 15 machines competing in Q1 qualify to move on to Q2.

In Q1, Yuhi Sekiguchi drove the Reito Mola GT-R to a lap time of 1'15.094 to emerge as the fastest session qualifier for the first time this season. Sekiguchi is the rookie driver selected to drive this year for the reigning GT500 champion team, and although he has shown good speed at times, he has not been able to translate it into top-flight results in the first three rounds of the season thus far. However, by scoring the fastest time in Q1 here, he also brought good momentum to the MOLA team.

Next, the action moved on to Q2, where the drivers have just 12 minutes to compete for pole position. In the driver's seat of the Reito Mola GT-R to make a bid for pole position in Q2 was 3-time GT500 champion and holder of the record for most wins, Satoshi Motoyama. By the time the start of Q2 came around, the skies over the circuit had grown ominously dark. Seeing this, the veteran Motoyama and the team broke from their usual game pattern of waiting until the last moment to make their fastest time attacks. Instead, they decided to make their attempts earlier in the session. With that strategy, Motoyama went out and drove a super lap time of 1'14.660 that bested the former track record of1'14.784, which had stood unbroken for seven years.

After that, Naoki Yamamoto in the Weider Modulo HSV-010, Hiroaki Ishiura in the Denso Kobelco SC430 and others also ran laps in the upper 1'14 range but were unable to beat Motoyama's time. Finally, with two minutes remaining in the session, rain began to fall at last, all but eliminating the possibility of any faster times. The remaining cars gave up the idea of making any more attempts and returned to the pit, thus effectively ending thus effectively ending the GT500 class Q2.

For Motoyama this was his first pole position in four years and his fifth career pole. For the Nissan GT-R, this was the third pole of the season and second in a row following one in the last round at Sepang. It also represents the GT-R's 23rd pole position overall in regular-season GT races (including those of the Skyline GT-R).

In the GT300 class, Kota Sasaki drove the Subaru BRZ R&D Sport machine to its 3rd pole position of the season with a course record-breaking time of 1'20.341. Following in 2nd to 4th positions were the three currently hot Japanese hybrid cars, including the last round's winning Arta CR-Z GT, the series point leading Mugen CR-Z GT and the winner of round two, the Panasonic apr Prius GT.

Satoshi Motoyama: "This year I came to compete under a different team organization and it took some time getting settled and making adjustments in the early rounds of the season. But, during the official test session at Suzuka the other day I got the feeling that things were beginning to go very well. Today's qualifying was run under some rather unusual conditions, but I feel that I was able to help bring out our full potential. Seeing Yuhi [teammate Sekiguchi] finished Q1 with the fastest time, assured me of the potential of the machine, but it also put some pressure on me [to perform equally well]. But, now I am certainly very happy."

Kota Sasaki: "At Sepang a mistake on my part caused us to miss winning pole position and in the race we were unable to get a podium finish. But in the official testing at Suzuka, we were able to get through all the tests we had planned and the machine became more stable and easier to drive. This season we won the pole position at the opening round at Okayama and round two at Fuji, but I felt as if it had been partly by chance. But, this time the pole is one that will give me confidence toward a strong performance in tomorrow's race."

This Week in Racing History (July 1-7)