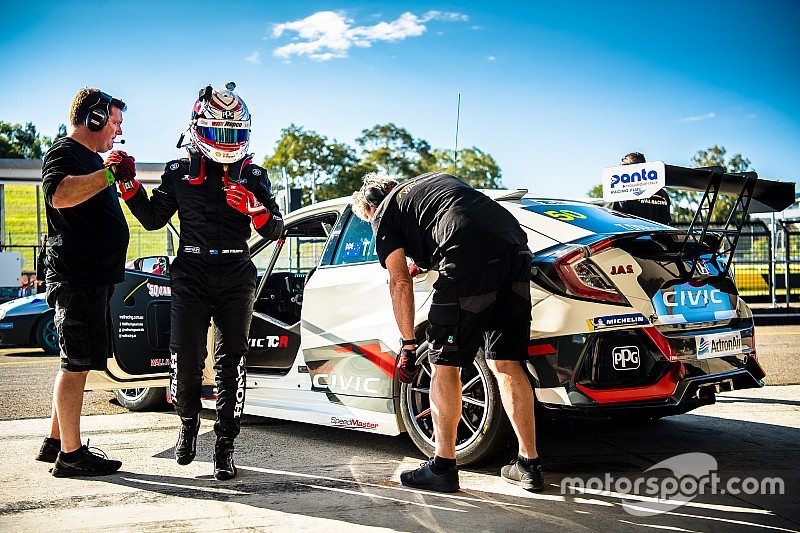 It was an all-Hyundai affair for much of the session, Will Brown and Michael Almond trading fastest times in the early stages.

Nathan Morcom was right in the battle for pole as well, making it an all Hyundai top three as the half-hour session ticked down to its final 10 minutes.

It was at that point the Hyundai dominance was broken, with Alfa driver Dylan O'Keeffe going quickest with a 1m34.401s, to that point the fastest lap of the weekend.

It was a timely lap, too, coming just seconds before the session was red flagged to retrieve James Moffat's stranded Renault from the outside of Turn 2.

The session was restarted with four minutes to go, giving drivers one last crack at pole.

And that was all D'Alberto needed, the DJR Team Penske enduro driver using a second set of greens to storm from the back end of the Top 10 to a history-making pole position with a 1m34.143s.

"We had to put another set of tyres at the end there," said D'Alberto.

"We just didn't maximise it at the start, we had a couple of little problems with the car which hurt out run early on, so I needed to have another go at the end."

The lap also makes him the first-ever TCR Australia championship leader, having bagged two points for pole along with the $1000 prize.

There were few other meaningful improvements following the red flag, which means Bright will start from the outside of the front row.

O'Keeffe ended up third, followed by the early pacesetters Brown and Almond.

Honda driver John Martin snuck into that pack of Hyundais to qualify sixth ahead of Morcom, with factory Audi GT ace Rik Breukers eighth in the Melbourne Performance Centre RS3.

Andre Heimgartner was the only Kelly Racing driver in the Top 10, the Kiwi qualifying ninth despite complaining of persistent downshift problems with his Subaru.

KR's two Astras were 14th (Alex Rullo) and 15th (Chelsea Angelo), with Molly Taylor 16th in the other Subaru.

Moffat was 10th fastest for the session, but causing the red flag meant he lost his best time and was demoted to 12th.