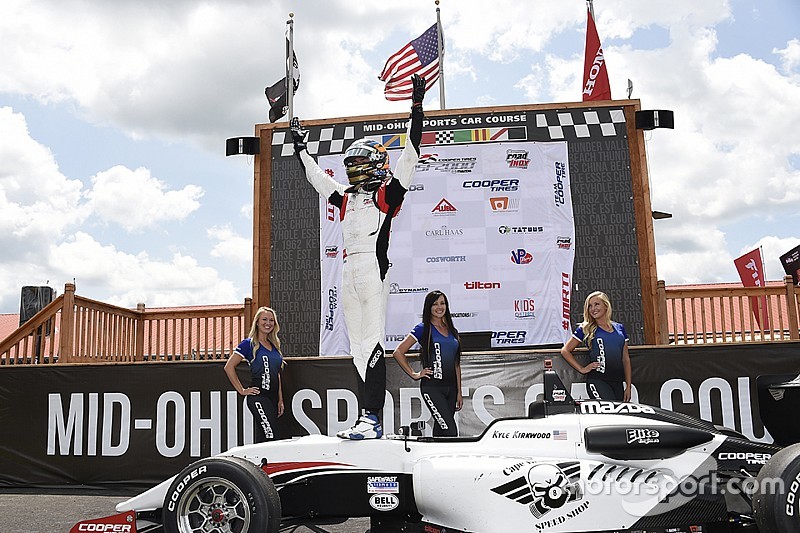 Kyle Kirkwood scored his eighth, ninth and tenth wins in the 2018 USF2000 championship to clinch the championship with two races to go, while Rinus VeeKay won both Pro Mazda rounds. 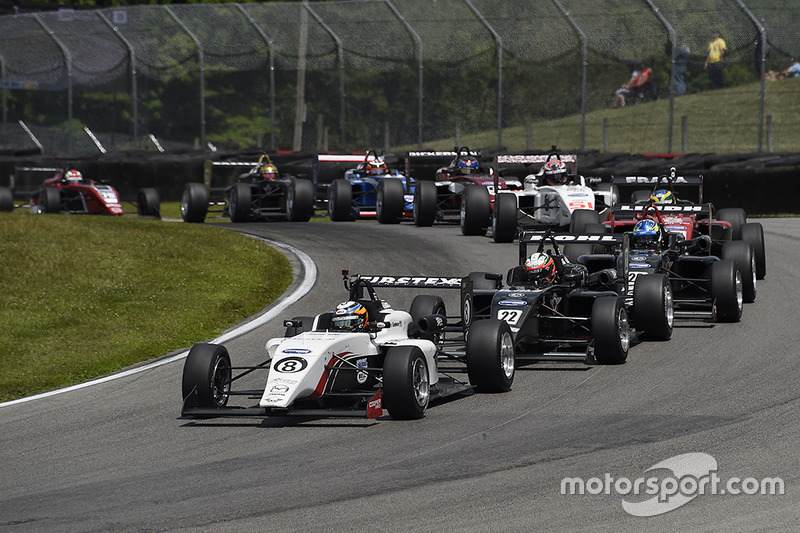 Cape Motorsports’ Kyle Kirkwood took the pole and the lead from the drop of the green in Race 1. He was ahead of the Pabst Racing trio of Kaylen Frederick, Rasmus Lindh and Lucas Kohl, but Lindh’s late challenge down the inside of Frederick at Turn 4 ended in contact, with the latter sliding across the grass and stalling. Out came the caution flags.

At the restart Kirkwood got away from Lindh, who then served a drive-through penalty, handing second to Kohl, while Keith Donegan’s third place for BN Racing was under increasing threat from James Raven’s DEForce Racing.

Raven’s efforts were in vain, as Calvin Ming and Darren Keane got around him and pushed him to sixth, while a second full-course caution flew on Lap 7 due to a lapped Frederick tangling with Russell McDonough, the pair falling off track.

Kirkwood escaped again when the green flag flew on Lap 11, aided by Kohl having to defend heavily from Donegan, who then fell into Ming’s clutches and lost out to a very brave pass around the outside of Turn 10 from the Pabst racer. But then another yellow flew after Oscar DeLuzuriaga spun his Newman Wachs Racing machine. At the restart Keane’s NWR car snagged the back of Sierra’s DEForce machine and broke his front wing hard enough to shove it under the car. Bruna Tomaselli struck the pitwall trying to avoid the mess, while Sierra – minus rear wing – spun off at Turn 1. Inevitably another yellow was required.

The field took the final restart with two laps to go, and Kirkwood again took more speed into Turn 1 to ensure he was out of reach of Kohl in the Turn 4 brake zone. Kohl was equally unthreatened by Ming, who had pressure from Raven, until the Briton was ordered to pit to serve a blocking penalty and tumbled to 13th.

Frederick had a chance to redeem his weekend in Race 2 having taken pole from Kirkwood ahead of Lindh, Kohl and Fraga, but although he took the lead at the start, the Pabst driver appeared to outbrake himself for Turn 2, and drove straight into the sandtrap. That handed the lead to Kirkwood, while Kohl got around Lindh, the pair of them chased by Fraga, Michael D’Orlando in the Team Benik machine.

Then DeLuzuriaga spun exiting Turn 11 and hit the wall. Out came the full course caution and when the race restarted Kirkwood immediately took charge, while Frederick caused a yellow by colliding with Sabre Cook’s Benik machine.

The race restarted on Lap 10, and while Kirkwood escaped from Kohl again, Dickerson came under pressure from the DEForce car of Kory Enders, Ming, Keane and Colin Kamminsky. Then Enders lost momentum trying to complete a pass, and fell behind Ming, who then made short work of Dickerson.

Into Turn 12 on the penultimate lap, Keane collided with Enders and went off onto the grass, the pair of them coming home 17th and 14th respectively.

Kirkwood came home 5.7sec ahead of Kohl, as Fraga claimed third ahead of Lindh, Ming and Dickerson.

Race 3 didn’t start promisingly – although it did for Kirkwood, who from the outside of the front row beat polesitter Raven into Turn 1, chased by Donegan, Lindh, Van Der Watt and Kohl, Sierra. In the middle of the pack on that opening lap, however Dickerson, Keane and Enders collided, leaving the latter trackside, and forcing Dickerson and Keane to have their cars checked over.

On the restart at the beginning of Lap 4, Kirkwood made the breakaway from Raven who in turn had no pressure from Donegan who was instead battling to keep Lindh in his mirrors. Sierra and Fraga passed Van Der Watt and Kohl respectively, and then Van der Watt passed Sierra but had no need, as the DEForce driver was forced to serve a drive-through penalty for jumping the start.

Van der Watt’s next problem, however, was the flying Frederick, who’d climbed from 22nd on the grid to sixth. Frederick went down the inside of the Pelfrey driver at Turn 4, but when Van der Watt tried to stick with the ArmsUp Motorsport driver around the outside, the pair appeared to make contact and the yellow car spun onto the grass. Race Control decided Frederick was to blame and he served a drive-through penalty, allowing Fraga into fifth.

Lindh went around the outside of Donegan at Turn 4 on Lap 18, with two to go, but that was the only significant order change in the final laps. Kirkwood scored his 10th win by over 6sec after setting the fastest lap on his final lap. Raven was 3.5sec ahead of Lindh, with Donegan holding onto fourth well ahead of Fraga, Kohl, Ming and d’Orlando. 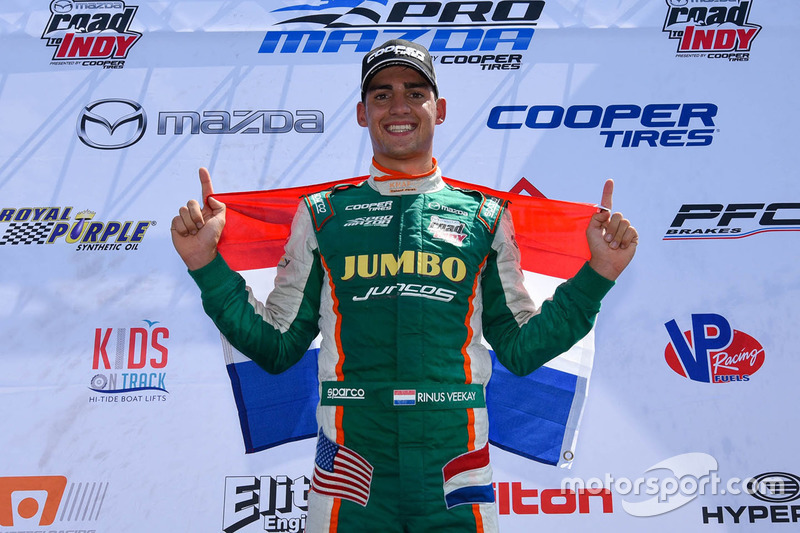 In Race 1, Juncos Racing’s Rinus VeeKay led away from pole ahead of David Malukas in the BN Racing car, with Robert Megennis moving his Juncos machine from fifth to third in the opening lap. On Lap 3, Carlos Cunha moved into fourth having gotten around the Exclusive Autosport car of Parker Thompson, who immediately came under pressure from Cape Motorsports’ Oliver Askew.

However this challenge faded from Lap 8 onward, and the order at the front remained static to the checkered flag. VeeKay won by 2.9sec ahead of Malukas who had a 1.3sec advantage over Megennis. Cunha held off Thompson by little more than half a second, while Askew claimed sixth.

Malukas had the pole for the second race, and he made the most of it so that the lead positions were reversed from the previous day’s action, and neither VeeKay nor Megennis appeared to have anything for him. Sadly, the BN driver then encountered a mechanical failure on Lap 8 and had to pull off.

That left Juncos with a comfortable 1-2 ahead of Askew, with Megennis appearing to step up his efforts to get around teammate VeeKay for the lead. There was another fine battle for fourth place, Felipe Drugovich of RP Motorsport Racing desperately trying to defend from Sting Ray Robb’s Team Pelfrey car and Thompson. However, on Lap 18, Robb finally made the move around the outside of Donegan at Turn 4, only completing the maneuver by Turn 6.

Two laps later the full-course yellow flew for Cunha, who’d qualified fifth but fallen off the track, and the green waved again with four laps to go. Robb tried a brave maneuver around the outside of Askew at Turn 4, but the Cape driver was in no mood to cooperate. That left the order static all the way to the checkered flag, VeeKay staying 1.4sec clear of Megennis, chased home by Askew, Robb, Drugovich and Thompson.