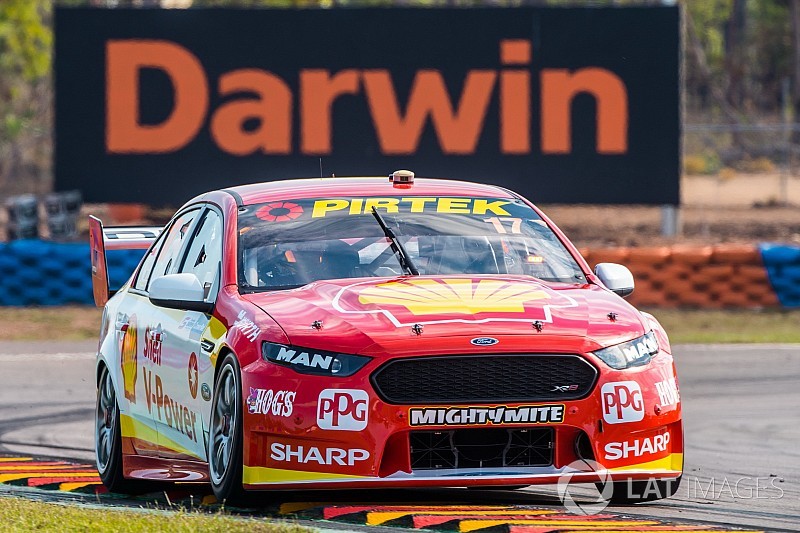 In a race that saw varying strategies come together at the end, McLaughlin was forced into a superb defensive effort to hold off the pair of Holdens and win by four-tenths.

McLaughlin spent the opening phase of the race running behind polesitter Reynolds, with Rick Kelly right in his mirrors.

The pressure from behind was relieved momentarily when Kelly pitted on Lap 5, but the pair were soon butting heads again following McLaughlin's stop a lap later. In the end it was the Penske Ford that narrowly hung on to the effective position, having run side by side through Turn 1 as McLaughlin re-joined.

The next challenge was doing enough to undercut Reynolds, who went the other way and ran a long first stint. That proved to not be too much of an issue, Reynolds re-appearing in what was effectively sixth after making his stop on Lap 21.

The bigger issue was fresh rubber – and it wasn't just Reynolds. Van Gisbergen, who also went long and made his stop on Lap 19, was the form man for the second stint, quickly hunting down the leading Falcon.

With 10 laps to go van Gisbergen was within a few tenths of the effective race leader, with Reynolds stalking the leading pair. But the points leader made sure there was no way through, holding off to win by 0.4s over van Gisbergen, Reynolds a further 0.8s back in third.

"I'm glad I don't wear one of this heart rate sensors, I would have blown the bloody thing off the richter scale," said McLaughlin.

"That other strategy was a bit faster, but [the team] put a lot of belief in me to bring it home, and thankfully I did. We all know Shane is a hard charger, I respect him like no other. It's great for me to hold him off. I really wanted that win bad."

"We just need to sort the qualifying out," added van Gisbergen, who started on the third row. "Really cool race, I just need to start up there. Scotty was driving awesome, good lines at the end. I just couldn't get through."

Scott Pye was another to benefit from a late stop, pitting on the same lap as Reynolds before using his fresher rubber to charge his way to fourth.

Garth Tander went even later, spending a lengthy period at the head of the field before eventually stopping on just 11 laps from the end. He then had the rubber to charge his way up to a remarkable fourth.

Kelly was the best of the group that stopped early (apart from McLaughlin) in fifth, ahead of Triple Eight pair Craig Lowndes and Jamie Whincup.

Nick Percat and Michael Caruso rounded out the Top 10, the latter experiencing a costly excursion at Turn 1 late in the race after running a similar strategy to Tander and looking to go for a big overcut.