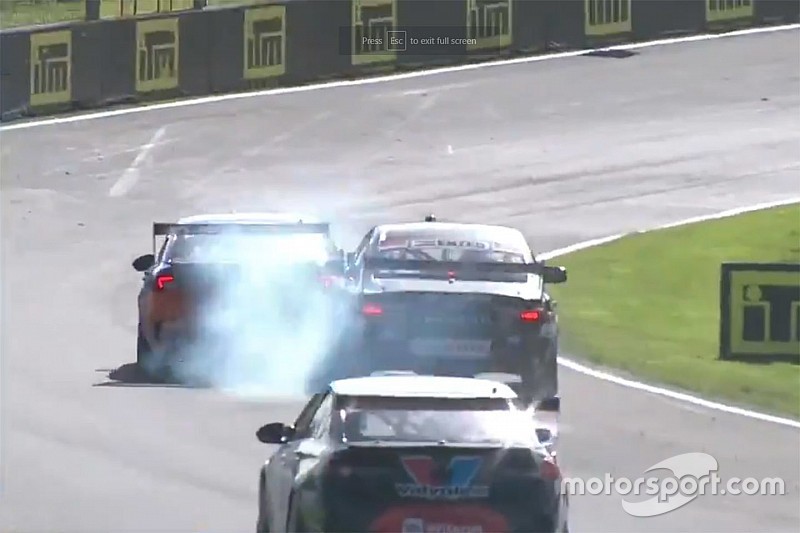 Nick Percat says a wild clash with Cam Waters at Pukekohe was 'average' from the Tickford driver, while Waters reckons the tussle was nothing more than 'hard racing'.

The pair staged a high-speed door-to-door battle through the flowing final sector at Pukekohe during today's race, which ended in a spectacular clash.

Trying to stay side-by-side with Percat, Waters rode up over the BJR Holden's rear quarter panel which sent the front of his Ford flying into the air.

Reflecting on the shunt after the race, Percat was less than impressed with Waters. He labelled the move as 'average', and while the hit itself was a surprise he reckons its consistent behaviour from Waters.

"It was definitely out of the blue," he told the TV broadcast.

"We obviously raced off [Turn] 4 when I came out of the pits and gave him room. And then we got to the hairpin, I was around the outside of him, [and] he tried to use me up there.

"That's what he does, it's the way he races, so I knew that was going to happen.

"I had fresh tyres and a brand-new tyre on the left-rear so I got good drive off there and looked in the mirror, realised there was no overlap, and turned into the last corner – and got the big bang.

"I thought I was going to be up in the crowd having a beer after that one.

Waters, however, saw it differently.

"I got kind of squeezed going into the last corner, so I thought fuck it, I'll give it a go. I ran out of room and rode up his back wheel. It is what it is.

"It was all a bit awkward. He kind of squeezed me early on, then there was kind of an overlap. I thought he might have gone back to the left a bit more before turning in.

"It was all going on when my front wheels were in the air. I was just hoping they'd come back down, and they came back down, so happy days.