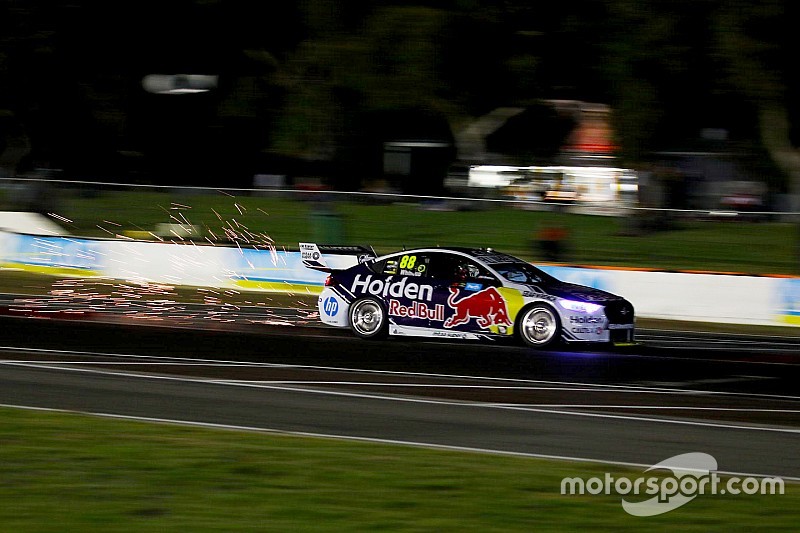 Jamie Whincup set the fastest-ever lap in a Supercar at Barbagallo Raceway this evening, as he topped the first nighttime practice on the newly-resurfaced track.

It didn't take long for Scott McLaughlin's existing practice lap record – a 54.573s set in 2017 – to fall, times dropping into the low 54s inside the first few minutes.

On the 15-minute mark the first sub-54s time hit the board, McLaughlin heading into uncharted territory with a 53.821s.

The likes of Whincup, Chaz Mostert and Rick Kelly quickly followed, before Lee Holdsworth lowered McLaughlin's benchmark with a 53.747s 10 minutes from the end.

Mostert, who had led the way in the first 10 minutes, returned to top spot with five minutes to go thanks to a 53.695s.

Tickford teammate Will Davison then went quickest with a 53.478s, at which point it was an all-Mustang top five.

But with three minutes to go Whincup broke the Ford dominance, going quickest with a 53.443s in his Red Bull Holden, a time that wouldn't be beaten.

"First impressions are that we’re much more competitive than Phillip Island," said Whincup.

"It’s not going to guarantee anything, we’ve got to keep the ball rolling, but much more competitive out of the track.

"It’s nice to be in a position where we should be competitive this weekend, but as it always is, we’ve just got to grind it out as the weekend goes on."

There were three Mustangs behind Whincup, with Mostert, Davison, and Fabian Coulthard, while David Reynolds was next-best Holden in fifth.

"Night, plus the new surface, is crazy," said the points leader.

"I was just saying, the first couple of laps took me a bit to get used to it all, but overall pretty happy.

"It was a good couple of race runs there, I feel good.

"Tomorrow is going to be interesting. It’s really, really fun just driving it on the front tyre and hooking it in.

"It’s like a Formula 1 car. It feels like we have a heap of downforce even though we’ve been given a hair cut. So it feels alright."

Scott Pye was ninth, while Cam Waters made sure all six of the hobbled Mustangs ended up in the Top 10.

Shane van Gisbergen finished up 11th, followed by Simona de Silvestro, who was the best Nissan in 12th.

Le Brocq to stay with Tekno for remaining Supercars season