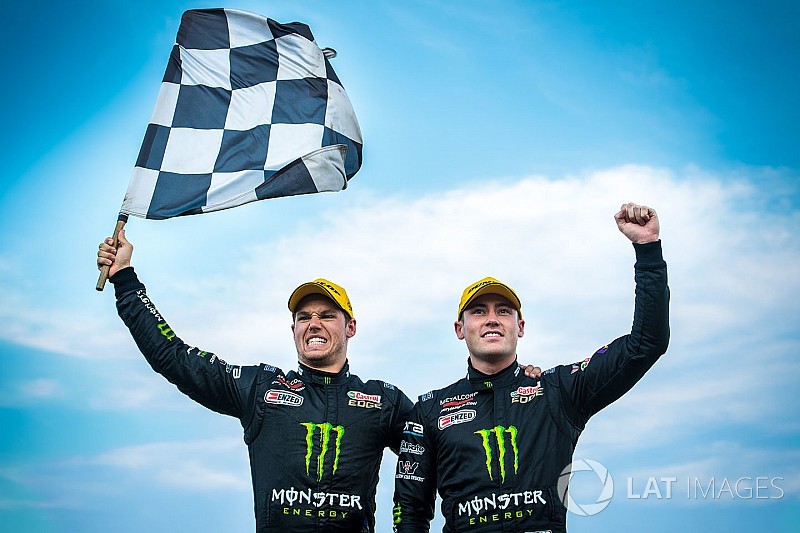 Cam Waters and Richie Stanaway have combined to secure their first wins in Supercars, the young Prodrive pair taking a measured win at the Sandown 500.

Neither regular driver Waters or co-driver Stanaway had won a main game Supercars race heading into the opening enduro of the season, but held off spirited challenges from the likes of Scott McLaughlin/Alex Premat and Paul Dumbrell/Jamie Whincup to claim Sandown glory.

The race only ran 125 of the scheduled 161 laps thanks to an early red flag, which soaked up the first hour. The stoppage was caused by LD Motorsport driver Taz Douglas, who fired into the wall at Dandenong Road due to a tyre failure on the first lap.

While Douglas was unharmed in the crash and the car was swiftly recovered, the repairs to the tyre wall made for a lengthy delay, and turned it into a time certain race.

That effectively split the race into a three-stopper, with the co-drivers still needing to complete the minimum 54 laps despite the shortened overall distance.

Despite the disruption, the pole-sitting #6 Prodrive Racing led the entirety of the opening stint thanks to a measured driver from Stanaway. The Kiwi held more experienced co-drivers Paul Dumbrell and Alex Premat at bay, those two scrapping over second while Stanaway maintained a narrow lead until pitting for the first time on Lap 20.

Behind the top three, the big mover in the first stint was Shane van Gisbergen. Triple Eight rolled the dice and put its main driver in car #97, and it paid off big time. He went from outside the Top 20 at the start to 13th before the red flag came out. A couple of laps after the restart he was into the Top 10, and made it all the way up to effective fourth by Lap 20.

The reigning Supercars champion then capped off the stellar stint by passing Premat just a corner before the pair pitted on Lap 22.

As the first stops shook out, it was actually Dumbrell who wound up in the lead. The #88 Commodore driver jumped Stanaway during the stops, and made a break at the front of the field ahead of Stanaway, Premat, and Campbell – those two having swapped spots again during the stops.

While the second stint looked as if it would be owned by Dumbrell, things went horribly wrong for the leaders on Lap 35. A right-rear tyre failure on the back straight meant a slow limp back to the pits, ruling the car out of genuine contention.

That meant Stanaway was back in the lead, and like in the first stint was able to keep Premat at arm’s length behind him. On Lap 55 they both made their second stops, Stanaway and Premat jumping out of the car having completed their minimum laps.

A lap earlier the #97 had made its second stop as well, although Campbell had to stay in the car to complete the second half of his double stint.

Waters and McLaughlin picked up where Stanaway and Premat had left off, the #17 Penske Ford stalking the #6 Prodrive Ford. Campbell held his own against the regular main gamers as well, keeping the sole Triple Eight car still running at the front in contention for at least a podium.

Campbell kicked off the third and final stops for the leaders when he handed the car back to van Gisbergen on Lap 86. Waters followed suit a lap later, before McLaughlin came in another lap later.

They returned in that order, Waters leading McLaughlin and van Gisbergen.

While the top two went on with it, the fourth and final stint was one too many for van Gisbergen. He quickly dropped off the back of the leaders, his hopes of an unlikely victory from the back of the grid done and dusted.

That left two contenders, points leader McLaughlin a little over a second behind Waters. But while Waters was unable to shake McLaughlin across a tense final stint, he was able to do enough to bring home a 0.6s victory for the Prodrive squad.

“I didn’t think I was going to keep him off; I don’t know if he used his tyre up a bit in the last stint but I managed to hold that gap. Richie did a mega job, got me the lead, and I managed to hold on to it.”

McLaughlin, meanwhile, was happy enough to add to his points lead.

“Congrats to Cam, I know how it feels for a first win,” said the Kiwi.

“I’m pretty stoked, this is a win for us. We’ll move on to Bathurst.”

Having dropped off the back of the top two after the final stop, van Gisbergen’s attention turned towards holding Chaz Mostert off for third place. On Lap 107 any chances of doing so went up in tyre smoke, a front-right failure on the approach to Turn 1 sending the #97 Commodore off the road.

That secured the final spot on the podium for Mostert and Steve Owen, a comeback of sorts after Owen was hit with a five-second penalty for a forceful passing move on Luke Youlden early in the first stint.

After a trip through the pits, van Gisbergen ultimately finished way down in 16th.

Reigning Sandown winner Garth Tander and James Golding were the best of the Holdens in fourth, having passed the Fabian Coulthard/Tony D’Alberto Penske Ford on the penultimate lap.

The gap is now 84 points between the top two, Coulthard another 77 points back.