Scott McLaughlin took provisional pole on the streets of Townsville, as Todd Hazelwood starred to secure a Top 10 Shootout berth. 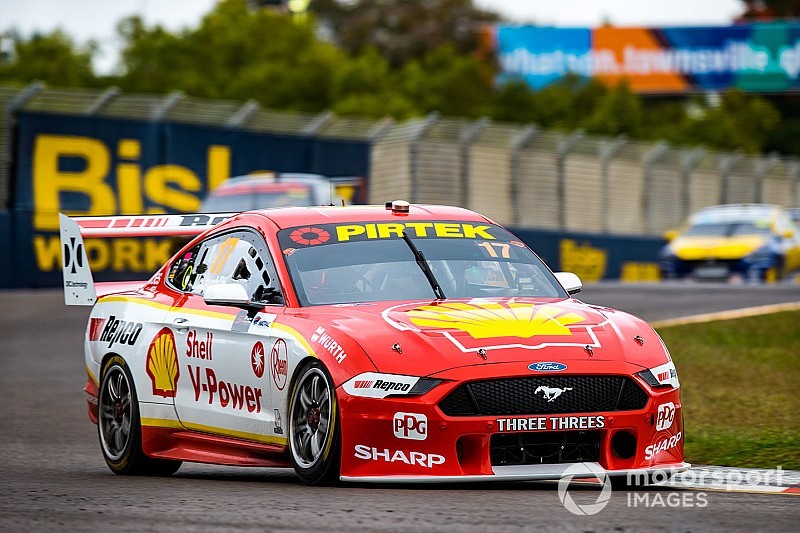 McLaughlin went quickest around the midway point of the 20-minute session, taking over from early pacesetter Lee Holdsworth with a 1m12.119s.

That time proved good enough to secure provisional pole, McLaughlin set to run last in the Top 10 Shootout despite not improving on his final run.

Saturday polesitter David Reynolds ended the session second after improving on his final run, while Todd Hazelwood booked his second career Shootout berth with an impressive late lap that put him third.

“That’s awesome. [I] absolutely nailed that lap, threw the car on the line and the iSeek Commodore was on rails,” said Hazelwood.

“I can’t thank the whole team at Matt Stone Racing enough for giving me the car to do it. I’m pumped.”

Fabian Coulthard was eighth in the second Penske Mustang, with Lee Holdsworth and Tim Slade rounding out those that qualified for the single-lap dash.

Jamie Whincup won't be appearing in the Shootout, set-up woes meaning the Red Bull Holden driver will start from 12th.

“We took a massive swing with the set-up, which we have been all weekend, and the car wasn’t as good then,” he said.

“I’d rather learn than anything. Disappointed to miss the Shootout, but it all makes sense because we’re changing massively.”

Chaz Mostert fared even worse, the third-place finisher from yesterday's race set to start from 16th after his own set-up gamble didn't work.

“At the end of the day we’re trying to catch one car out there, one car is doing a fantastic job and has been the benchmark all year,” said Mostert.

“We’re trying to do some things with the car to try and bridge that gap.

"Yesterday we had a good car but didn’t have a good race car, and today I just couldn’t feel the car under me.”