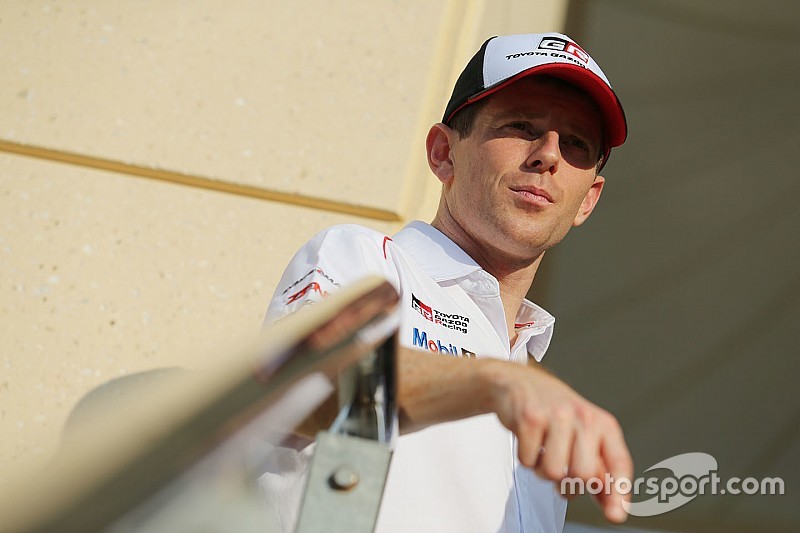 Along with teammates in the #8 car Sebastien Buemi and Kazuki Nakajima, Davidson ended the season with a third consecutive race win and a fifth of the year.

The trio were the only one of the four LMP1 crews to get through the race incident-free, as the sister #7 Toyota and the #1 Porsche were both ruled out by collisions with GTE cars.

Porsche’s championship-winning #2 car was compromised very early by an unscheduled stop to remove a bollard that had become wedged under the front bodywork.

However, the race didn’t go entirely smoothly for Davidson, who managed to break one of his toes on his left foot against the door of the team building when he ran to the car ready to take over during a Full Course Yellow period.

Davidson recalled: “I broke my toe by kicking the door, by running to the car a bit too hastily!

“It often happens when you get a potential Full Course Yellow, that you have to spring into action and leg it to the car. That’s what I did, but unfortunately stubbed my toe on the door.

“I thought, ‘ooh, that hurt’, and it carried on getting worse and worse through the stint.”

He added: “If I could take a fifth race victory of the season and a broken toe at the same time, or no victory and no broken toe, I know what I would go for.

“It doesn’t matter as it’s the end of the season.”

Despite the drama, Davidson said he relished his battle with the #1 Porsche for the lead in what was the German marque’s final LMP1 race.

“A great race, a great fight one last time with Porsche,” said the Briton. “We hit the ground running, the car felt awesome straight away. And they are just the best weekends.

“When I jumped in, the balance was nice and the grip levels had come up by that point in the race. I was able to really lean in on the tyres and close back in on the leading Porsche.

“I put Nick [Tandy] under a lot of pressure, so much so that he went for a move [on the #86 Gulf Porsche], and that’s when the race was won. Good fun, I really enjoyed it for one last time.”