Ingolstadt/Bahrain, November 30, 2013  Audi finished the year in the FIA World Endurance Championship (WEC) in Bahrain in second place. The World Championship winning team* had to admit defeat only for the second time in eight races and can look back on a highly successful sporting season.

Until shortly before the races midpoint, Audi Sport Team Joest was in a promising position in the final 6-hour race of the year. Loïc Duval/Tom Kristensen/Allan McNish (F/DK/GB) in the Audi R18 e-tron quattro, with a gap of about 15 seconds, were running within striking distance of the leading Toyota. Then, on lap 95, Duval reported a problem in the power transmission system over the radio. 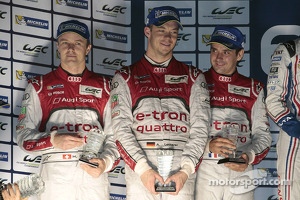 For the first time in 23 races which the various Audi R18 models have completed since 2011, a technical defect resulted in retirement. Marcel Fässler/André Lotterer/Benoît Tréluyer (CH/D/F) subsequently took over second place from their team-mates. After 3:33 hours of racing, the stewards of the meeting imposed a drive-through penalty against Marcel Fässler for overtaking under yellow flags. Consequently, the number 1 R18 e-tron quattro lost more than one minute and, after six hours of racing, crossed the finish line in second place.

On taking this 15th podium position in the current WEC season, Audi concluded an endurance racing year full of highlights in Bahrain. Audi Sport Team Joest decided six of the eight WEC rounds in its favor  one more than last year.

The company celebrated the second title success in the manufacturers World Championship(*) early with its hybrid sports car. Loïc Duval/Tom Kristensen/Allan McNish won the drivers World Championship(*) early as well, following their Audi team-mates Marcel Fässler/André Lotterer/Benoît Tréluyer, who were the first World Champions of the new series the previous year, Audis twelfth victory in the Le Mans 24 Hours, the eleventh success at the Sebring 12 Hours held as part of the American Le Mans Series, the win of the tradition-steeped Tourist Trophy at Silverstone plus five qualifying best times in the WEC completed the tally. In addition, Audi won the drivers title in the DTM this year with Mike Rockenfeller and the team classification with Audi Sport Team Phoenix.

Audis racing season is over now, but the squad has long begun to intensively prepare for 2014. That is when a fundamentally new set of regulations, rewarding the best efficiency, will come into effect in the WEC. Audi is developing a completely new race car for it that will make its racing debut in the WEC season opener at Silverstone on April 20, 2014.

(*) Subject to the official publication of the results by the FIA

Dr. Wolfgang Ullrich (Head of Audi Motorsport): We can be very pleased with the season. We won the World Championship and the Le Mans 24 Hours and showed superb races. That it wasnt enough today was a bit of a shame. But Toyota was simply stronger here. Unfortunately, a R18 e-tron quattro retired with a technical defect for the first time in its last race of all races. But this only shows how reliable our cars have always been up to now.

Chris Reinke (Head of LMP): Were looking back on a very strong season. As our aim, wed have wished for another victory, so we achieved second place in Bahrain. The only retirement of an R18 for a technical reason to date impressively shows how proud we can be of all the performances this race car has been delivering.

Ralf Jüttner (Technical Director Audi Sport Team Joest): This was a very successful season for Audi and for Audi Sport Team Joest. Unfortunately, the last race doesnt perfectly fit the picture. Toyota has made a step forward in the past two races. Our World Champions retired today. With car number 1 we tried everything but then had to serve a drive-through penalty and admit defeat. Still, we made our mark on this season.

Marcel Fässler (Audi R18 e-tron quattro #1): Naturally, wed have liked to have won this race too but the competition was very strong today. We changed our strategy during the course of the race and I drove two stints on one set of tires. Unfortunately, the outcome wasnt the way wed hoped for because the tire grip had degraded by the end. But we simply had to take a risk. We all battled hard for victory. On the whole, we had a great season which the entire Audi team can be proud of.

André Lotterer (Audi R18 e-tron quattro #1): We tried to save fuel today. As a result, the rhythm of driving wasnt as easy as usual. Toward the end of the race overtaking traffic was unusually difficult. On each lap, there were slower cars in exactly the places where you least needed them to be. But our car was very good today. Basically, were simply stronger on other types of tracks.

Benoît Tréluyer (Audi R18 e-tron quattro #1): This was a very tough race today. The early phase on used tires was difficult. On fresh tires, the car was easier to drive. I found my rhythm a bit too late. Our sister car was simply better on track. Unfortunately, it retired. But together weve experienced a great season. Congratulations to Toyota on winning.

Loïc Duval (Audi R18 e-tron quattro #2): As expected, a fierce battle with Toyota ensued. Tom Kristensen was driving a strong stint and then I took over. It was a strategically interesting race. Unfortunately, a problem in the power transmission system occurred which meant the end of our race.

Tom Kristensen (Audi R18 e-tron quattro #2): All the engineers, mechanics and other members of the team worked hard for many days and nights this year in order to prepare these great cars for us. Wed have liked to reward them with another nice result in the last race. Up until our retirement, we showed them and the spectators a nice battle.

Allan McNish (Audi R18 e-tron quattro #2): Loïc Duval, Tom Kristensen and I had a fantastic season. We clinched all the great victories, starting at Silverstone, and then of course the Le Mans 24 Hours, Austin and, ultimately, the early title win: A brilliant result for Audi Sport. We arrived in Bahrain without any pressure. We battled with Toyota. Just when I was getting ready to get into the car for my first stint, the news came that our race was over. Its our first retirement for a technical reason. But that cant devalue what has been a first-class season otherwise.