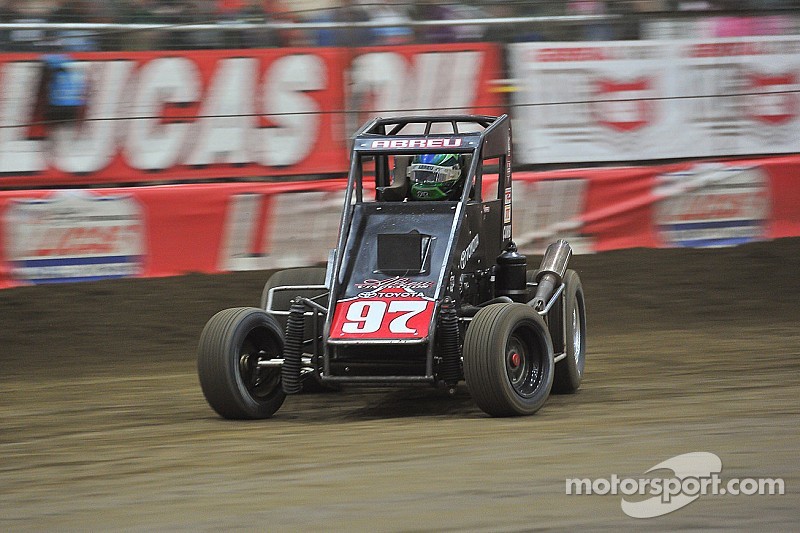 TULARE, Calif. - March 14, 2015 - With his decisive win Saturday night at Thunderbowl Raceway, Rico Abreu became the eighth different World of Outlaws Sprint Car Series winner in eight races so far this season - the first time since 1995 that has happened.

"Everything played out well tonight," Abreu said in victory lane. "I got a good start in the dash and then just made every lap count in that feature."

After a fifth place run Friday night at Thunderbowl, Abreu showed his dominance early in the night, scoring a win in his heat and second place finish in the Dash. When the green flag flew, Abreu battled past Brad Sweet to lead the first lap. Through several restarts, Abreu maintained his lead and by the end of the night had built up straightaway between him and second-place Shane Stewart.

Abreu's command performance at Thunderbowl was déjà vu for the 23-year-old driver, who scored his first ever series win almost exactly one year ago at the track.

Obviously I wanted to beat (Rico) but I couldn't be beat by a better guy and a better team,

"A lot of people don't realize how much work is put in behind the scenes and that's what makes this car go fast," Abreu said of his No. 24 Abreu Vineyards team. "It's a cool win. Especially to back it up with last year's Outlaw win. I look forward to winning a few more this year - not just here."

Shane Stewart kicked off the second night of racing for the Outlaws and King of the West Series at Thunderbowl by scoring the quick time of the night - the sixth different driver of the season to do so.

In the feature, Brad Sweet and Abreu, both California natives, led the field to the green flag. A yellow quickly fell on the track as Tim Kaeding and Jason Sides spun around in turn four. When the field returned to green, Abreu battled past Sweet to lead the first official lap. Donny Schatz utilized the restart to take over the fifth position and then found his way around Joey Saldana on the high side of four to take over the fourth position.

By lap three, Sweet worked to hold off Stewart who had his sights set on second. With Sweet working the bottom of the track, Stewart took the high line and passed Sweet as the two drivers came off of turn two onto the backstretch.

Sweet then had Donny Schatz to contend with. Schatz, the reigning series champion, had worked his way forward from a sixth place starting position. Through the next two laps, Schatz worked his way around Sweet to take over third.

A caution flag flew on lap 10 and on the subsequent restart a red flag was thrown after a mid-pack wreck that collected Brian Brown, Jason Johnson, the previous night's winner Tim Kaeding, Carson Macedo, Trey Starks and Cory Eliason.

The race again went back to green after an extended open red with Abreu in the lead. Schatz, then in third, tried to make his move on Stewart, at one point getting side-by-side with the Larson Marks Racing driver. Stewart however was able to hold the position.

By lap 15, Schatz was the one on the defensive after Sweet caught the Tony Stewart Racing driver. A slide job through turns three and four briefly gave Sweet the position but Schatz battled back by. Two laps later, Sweet was able to get back around Schatz. Three laps later, Sweet took back the second position from Stewart.

"Got the top groove in three and four really working pretty good and thought we were going to have something for Rico," Sweet said. "Then the rubber came down and I didn't find it quick enough."

Stewart said his car was a little too free after the earlier red flag and let Abreu get away from him and then Sweet get by. With track conditions in play, Stewart was able to find the fast line quicker than Sweet and battled back past the Kasey Kahne Racing driver on lap 23 for second.

Stewart tried to close the gap on Abreu in the closing laps but had nothing for the young driver. Abreu closed out his dominant performance by leading every lap.

"Obviously I wanted to beat (Rico) but I couldn't be beat by a better guy and a better team," said Stewart, who used to drive for Abreu's car owner Paul Silva. "I can't say enough for my guys. They've worked really hard this weekend. I felt like I was just a little free after that red and let Rico get away from us and was able to get back by Brad when the rubber came down… Anytime you can run top-three is a good weekend and we're very, very happy."

The finish was Stewart's third second place finish in a row. So far this season, he has just one finish outside the top-ten. Stewart expanded his championship points lead over second place Donny Schatz to 21.

Third place finisher Brad Sweet, who ran well Friday night at Thunderbowl before getting caught up in a wreck, said he needs to do a better job finding the racing line to keep up with his competitors.

"I didn't feel like I drove a really good race but my guys - we've been tight and tight and tight so we left it a little bit looser and was just a little bit too loose at the beginning to really get going the way I'd like to," Sweet said. "We're just learning. I'm happy to bring it home in third."

Sweet is currently third in the championship point standings, 22 points out of the lead and one point back from second place Schatz.

Bud Kaeding was the night's KSE Racing Hard Charger after advancing 17 positions to finish in ninth.

The World of Outlaws Sprint Car Series next heads to Stockton (Calif.) Dirt Track next weekend, March 21 and 22.