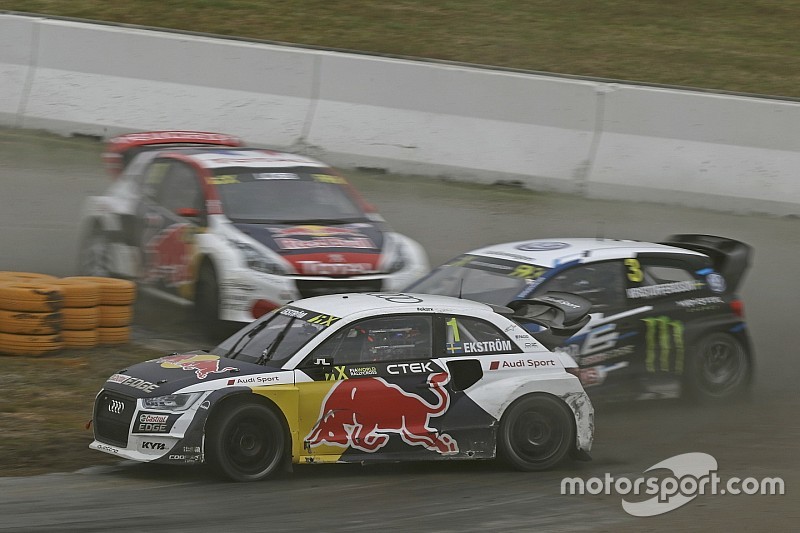 Championship leader Mattias Ekstrom has again completed a World Rallycross weekend turnaround, making it three out of three wins in 2017 so far.

The Swede, who had ended the opening day of qualifying ninth overall, went on to win his semi-final and then controlled the final race.

Fine rain fell ahead of the day’s three races and, having started on the front row of semi-final two, Ekstrom pressured polesitter and race leader Timmy Hansen throughout to claim the race win when Hansen made a mistake on the final lap and ran wide into the Sachs Kurve gravel trap.

In the main race, Ekstrom seized the lead as Kristoffersson’s Volkswagen Polo bogged on the start line and the Swede wouldn't relinquish first place for the rest of the distance.

Taking his joker on lap four of the race, Ekstrom remained at the head of the order, shadowed by Kristoffersson in second.

Ekstrom’s great start was mirrored by that of his EKS teammate, Toomas Heikkinen, who from the back row of the grid fought with former World Rally champions Sebastien Loeb and Petter Solberg after the first corner, Heikkinen and Loeb running side-by-side into the Sachs Kurve before Solberg made it three-wide to claim two positions from one move and run fourth.

Solberg momentarily climbed to third when Hansen took his joker on lap two, but using the dryer inside line with more grip, Hansen re-passed Solberg into the first corner of lap three, and remained third to score his first podium of the season.

Heikkinen finished sixth, unable to repeat the EKS double podium of twelve months ago, where he had finished second the Ekstrom.

The Finn had made a fantastic start in semi-final two from the outside of the grid to move into the lead, but on the slippery outside of the circuit couldn’t get the Audi S1 stopped and ran wide. He replicated the move in the final, but again on the outside couldn’t make the move stick, before battling with Loeb and Solberg.

The result means Ekstrom extends his lead in the drivers’ standings over Kristoffersson by two points, as the PSRX Volkswagen Sweden team pulled further ahead in the teams; championship by virtue of both Kristoffersson and Solberg making it into the final for the third event in a row.

Following the podium celebrations, Ekstrom hopped on a bicycle to rush back to the paddock and take part in DTM qualifying, where he finished 10th.