It is with great sadness that the Go Fast Energy World Rally Team can confirm that Matthew Wilson injured his ankle during training earlier [Saturday] and that he and co-driver Scott Martin will consequentially miss the second round of the World Rally Championship (WRC) in Sweden next week. 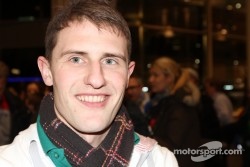 It was during one of Wilson’s regular training sessions - fell running around the English Lake District - that the British driver took an awkward fall. Having been rushed to hospital, Wilson is currently being assessed by doctors but early indications would suggest that the 25 year-old has broken his left ankle.

Wilson and Martin were due to complete 100km of testing in their Ford Fiesta RS WRC ahead of the 60th Rally Sweden early next week. Looking forward to getting their 2012 season off to a competitive start, the British duo was eager to push for a good result on the more familiar Scandinavian stages.

Fresh from their 2nd place at Rally Finnskog, sole representation for the Go Fast Energy World Rally Team now falls to Henning Solberg and co-driver Ilka Minor as the pairing embark on the Norwegian’s home event.

I was really looking forward to Sweden... I’m absolutely gutted.

“It looks as though I’ve broken and dislocated my left ankle so, unfortunately, that means no Rally Sweden for me. I was really looking forward to Sweden. We were a lot more prepared for this rally [than we had been for Rallye Monte-Carlo] and we would have been looking for a good result. I’m absolutely gutted.”