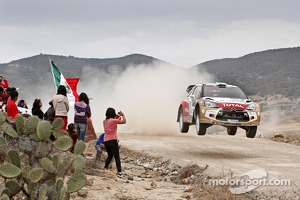 Despite its many tricky sections, day two of Rally Mexico still saw the Citroën Total Abu Dhabi WRT put together the makings of a good overall result. Now second overall, Mikko Hirvonen and Jarmo Lehtinen will need to keep pushing tomorrow to defend their position. Meanwhile, Dani Sordo and Carlos del Barrio have a strong hold on fourth place.

After yesterday’s first leg featured a series of short stages, day two of Rally Mexico focussed on two ‘biggies’: Ibarrilla (30.04km) and Otates (42.17km). Incredibly brittle and rock-strewn, the Sierra de Lobos roads would sorely test the drivers, the cars and the tyres.

Mikko Hirvonen began the day in third position overall, aiming to catch Mads Østberg. After a good first stage, the Finn heard the news that his Norwegian rival had retired before the start of Otates (SS15). He therefore eased off considerably before heading back to León for the mid-day service. “It’s a shame for Mads, but it means that we gain a position. The gaps are pretty big now, so my aim for the rest of the rally is to make sure of second place. It won't be easy because the road surface is particularly difficult. But I’m not worried, I’m used to managing this kind of situation. We’ll just have to stay totally focussed.”

Also having got off to a strong start on Ibarilla, Dani Sordo lost ten seconds or so after picking up a puncture 7 kilometres from the finish. With no second spare tyre, the Spaniard then took it particularly easy on the first run on Otates: “In any case, I couldn't go much faster, the car was sliding around a lot and as soon as I tried to go faster I ended up almost going off. We tested a new set-up this morning, but we are going to make some more changes.”

After the service, the competitors headed off to complete their second runs on the stages. After getting closer to the times of the frontrunners, Dani Sordo was happier again: “This time, we moved in the right direction, and I'm going to be able to move forward. I think we have found the right set-up for me. We are now clear in fourth position, so our aim will be to make it to the finish without incident tomorrow.”

Despite adopting a cautious approach, Mikko almost lost his second place on SS18 after picking up a puncture on one of the rear tyres: “It happened after about twenty kilometres, half-way through the stage. I didn’t feel a thing; we didn’t hit anything. I decided not to stop to change the tyre.” When the no.2 DS3 WRC made it to the finish of Otates, his left-hand rear wheel only had a few shreds of carcass left on it…

Mikko was able to complete the day’s two closing super special stages without incident. However, with his lead over the third-placed driver cut to 7.5s, he will need to keep pushing tomorrow: “It's never over, especially on such a difficult rally. Tomorrow’s 54km-long stage may well prove decisive and I'm sure that Thierry Neuville will push hard to try and get ahead of us. But we are going to defend our position!”

Tenth overall at the end of the first leg, Chris Atkinson and Stéphane Prévot made the most progress on day two. By moving ahead of Martin Prokop and Benito Guerra, the Abu Dhabi Citroën Total WRT crew climbed to seventh overall. “We drove well without taking any major risks,” confirmed the Australian, who set two fourth-fastest stage times on Ibarilla 2 and Otates 2. “We’re now less than thirty seconds behind Ken Block, so we can get one more position tomorrow. So we have a chance of sixth, which wouldn’t be too far off my initial target.”

Increasingly at ease in the DS3 WRC, Benito Guerra held firm in eighth place: “It was another positive day for me. We learned a lot again and I’m pleased that I didn’t make any significant mistakes. It would be a great result for me and the people supporting me here if I could finish in the points.”