Citroën is determined to continue its winning streak in Argentina

Since the start of the season the Citroën DS3 WRCs have won all four rallies run on gravel. Sébastien Loeb and Daniel Elena, victorious in Mexico and Italy, and Sébastien Ogier and Julien Ingrassia, winners in Portugal and Jordan, have shared Citroën’s successes. The Citroën Total World Rally Team’s aim is to continue this winning streak in Argentina, an event in which the French make has always excelled.

Our results are the fruit of the whole team’s work.

Rally Argentina is the first of two events run in the southern hemisphere. It has a special place in the WRC in general, and in Citroën Racing’s heart in particular. Since 2004, first of all with Carlos Sainz and then with Sébastien Loeb, the French outfit has never been beaten in the Cordoba region In 2011, the team has entered the Citroën DS3 WRC with a single ambition – continue this winning streak!

The return of Rally Argentina to the WRC calendar after a year’s absence has led to a few innovations on the route. Villa Carlos Paz is still the nerve centre of the event and the entrants will rediscover the famous Traslasierra, Punilla and Calamuchita valleys. On the other hand, a new super special has been laid out in Villa Carlos Paz. It will be the theatre of the start, which will be given on Thursday afternoon. In addition, long asphalt sections will be scattered along the mainly gravel route.

“A test session was held this week to validate the behaviour of the car on asphalt,” explains Sébastien Loeb. With a twenty-kilometer section on Friday and another of fourteen kilometers on Saturday to be covered twice, almost 20% of the rally will be on tar macadam. “As the asphalt sections are in the very heart of the gravel sectors, we can’t play on the setups. We’ll have to adapt our driving style to get the best out of them. And the crucial factor will be good tyre wear management.” 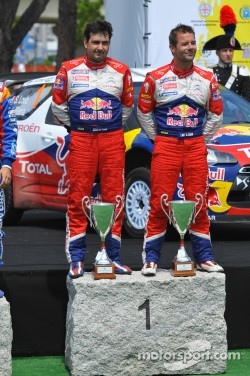 Sébastien Loeb and Daniel Elena lead the overall general drivers’ classification and they’re aiming for another victory in Argentina: “Our results are the fruit of the whole team’s work. It’s a good sign to see that the Citroën DS3 WRCs seem to have a slight advantage on gravel, but the gaps are tiny at the end of each rally. We’ll have to be quick right from the start, and go pedal to the metal till the end as with a stage of 48 kilometers to start the last day, there’s no question of letting up.”

Sébastien Ogier’s only outing in Argentina was in 2009 so he has limited experience in this rally: “We’re coming here with much greater ambitions than two years ago. The route’s fantastic and very varied. You have to have very accurate notes as certain passages are very narrow with big stones on the edge of the line like Mina Clavero and El Condor. Others are more sandy but bumpy as always.

“Of course, we’re aiming for the best possible result,” Ogier, who is currently lying third in the championship chase, adds. “We’re going try and score good points and close the gap to the leaders.”

As a prelude to the rally and to greet their Argentinean fans, the Citroën Racing crews will go to Buenos Aires on Saturday 21st May to put on an exceptional show with the DS3 WRC around the obelisk on the Place de la République.