Dani Sordo and Carlos del Barrio kept out of trouble, however, to finish day one in second position overall.

The first leg of the Acropolis Rally may well have only featured two stages, but there was no shortage of incidents. Dani Sordo and Carlos del Barrio kept out of trouble, however, to finish day one in second position overall. Meanwhile, in the second DS3 WRC of the Citroën Total Abu Dhabi World Rally Team, Mikko Hirvonen and Jarmo Lehtinen lost time due to a mechanical problem.

Featuring the qualifying stage, the ceremonial start and two stages, the first leg of the Acropolis Rally provided the crews with a full schedule. Those who believed that the compact format of the event would lead to a dull race were however left to revise their position! 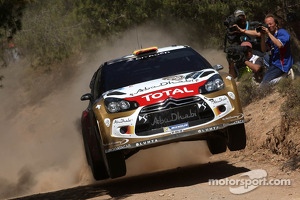 It must be said that the 47.70km-long SS1 provided one hell of test for the start of the rally. The first driver to make it to Kineta’s stop control, Khalid Al-Qassimi looked somewhat taken aback. “I had no confidence at all, I had to carve a line for my rivals and the DS3 was constantly going off the road”, exclaimed the Abu Dhabi driver. “I then calmed down, but I thought I had lost a lot more time.” Khalid ended up with the eighth fastest time, having lost less time than Mads Ostberg, Sébastien Ogier and Mikko Hirvonen.

The Finn had however been on course to set the second fastest time, but sadly it just wasn’t to be. “We were seven kilometres from the finish when I started to feel vibrations and hear strange noises. There was a problem with the steering, but the car was still able to turn a little. We managed to keep going at a slower speed. Sometimes, I had to do a lot of manoeuvring just to get round some of the corners, but we managed to get there in the end.” Clearly disappointed, the no.2 DS3 WRC driver made it to the service park where the team’s mechanics repaired his car.

Meanwhile, Dani Sordo kept out of trouble on this treacherous stage. The Spaniard set the second fastest time, around twenty seconds off the pace. “When I saw the splits and the messages telling about the problems that some of the other guys were having, I decided to take it a little bit easier”, he said, as the sun set on the Gulf of Corinth. “Obviously, it’s a very good start, but the misfortunes of some of the others show just how difficult this rally is. For the time being, we need to try and get to the end of SS2…”

Held on the first twenty-six kilometres of SS1, the Kineta stage was therefore contested in the dark. Dani Sordo lost a few more seconds to Novikov, but he was still pleased with this first leg: “The main thing is that we’re right up there and haven’t had any major problems. Maybe I was a little too cautious on SS2, but Evgeny’s lead is small on a rally like this one. I feel confident about the rest of the weekend.”

Mikko Hirvonen set a good time on this stage, but his objectives are now more modest: “After losing so much time, I have given up any hopes of winning and will now try to pick up a few points for the Championships.”

With the roads swept clear of loose gravel by the first runs, Khalid Al-Qassimi was visibly happier in his DS3 WRC and enjoyed driving it on the second test. The Emirati now lies eighth overall.

Competing in their DS3 RRC, Robert Kubica and Maciek Baran lead the WRC2 standings after setting the fastest time in their category on both of the opening stages. The Polish pair lead second-placed Yurii Protasov by 38.2s.