Hyundai now leads the WRC manufacturers' championship by 37 points over Toyota after its one-two in Argentina last weekend, where Neuville followed up his Corsica win with a second straight triumph, backed up by teammate Andreas Mikkelsen in second.

Adamo acknowledged that Hyundai was achieving those results without having the pacesetting car.

“We are still catching up from Monte Carlo,” he said. “I keep saying there are no miracles coming, but those guys [Neuville and Nicolas Gilsoul, co-driver], they made the difference.

"They filled the gap for us and we have to say thank you to them.”

Neuville pointed out that although Ott Tanak had retired in Argentina while in the lead battle, the Toyota had still been behind his Hyundai when it stopped.

“We knew the car worked better here than somewhere like Mexico,” Neuville said. “And it really did work well. OK, Tanak was coming, but we held him off and we were still leading when he stopped.

"I’m happy. This is a good performance, it’s good points for the championship and I can feel the car is coming now.”

Adamo said it would be Rally Finland in the summer before Hyundai was able to bring the upgrades it wanted to its i20 WRC.

"We have improved and we are working all together," he said. "But as you know, due to the homologation session that the FIA is ruling, we cannot make changes every week with all the ideas that we have to make the car better.

"We have a limited number of test days, we have homologation sessions… so, we have to move step by step.

"And also be always available [finishing]: this is something that I stress very much to my people, because as we have seen even [in Argentina], reliability is something that allowed us to be in this situation at the end of the rally."

Mikkelsen's second place was also a particularly important result, as it marked his first podium since Rally Sweden 2017 over 14 months earlier and came after he had been dropped from the Hyundai line-up for the preceding round in Corsica.

"It feels like a win, I’ve got to be honest," said Mikkelsen. "I am very, very happy with this.” 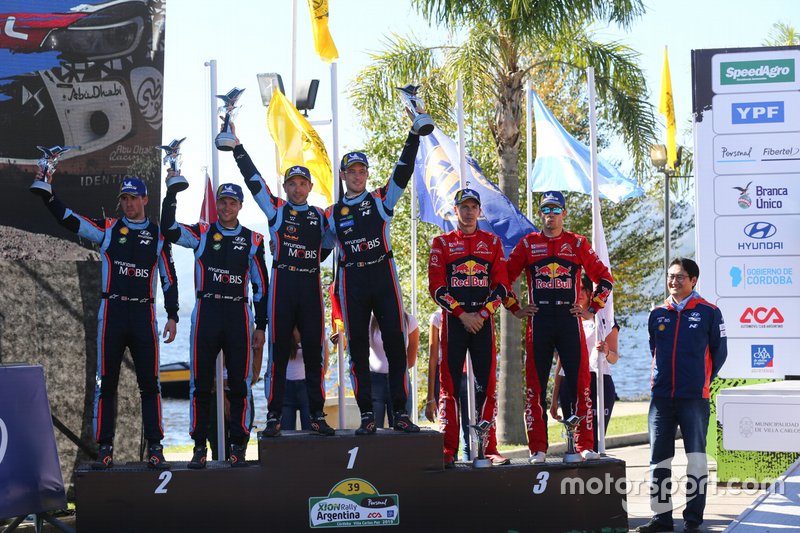