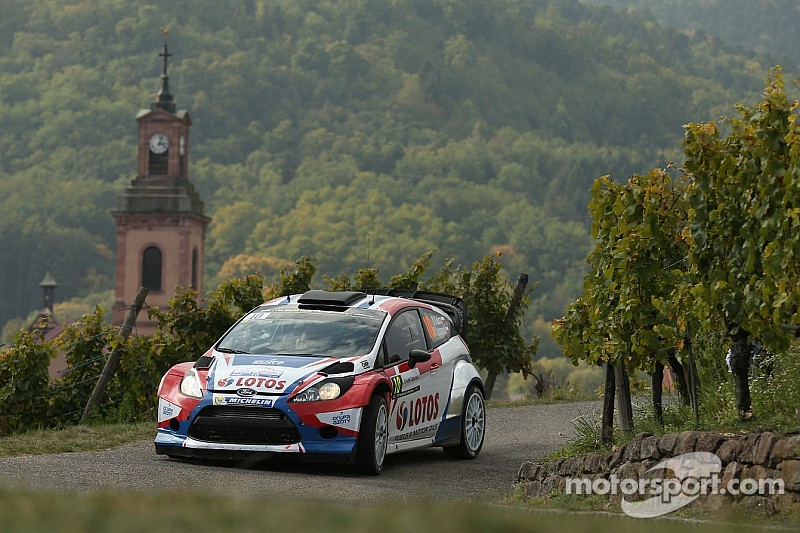 Robert Kubica adopted a near-perfect strategy for the event.

RK M-Sport World Rally Team’s Robert Kubica was on course to secure a career-best fourth place at Rallye de France – Alsace before a roll on the final stage relegated him from the results.

Robert adopted a near-perfect strategy for the event – gradually building his pace and taking every challenge within his stride. As he gained confidence with Michelin’s new compound tyres and the way in which his Ford Fiesta RS WRC responded to the Alsatian asphalt, his progression was clear to see.

Embarking on the event’s final four speed tests with a clearer understanding of the stages, tyres and car, he and co-driver Maciek Szczepaniak were determined to achieve their fourth place target. Setting the stages alight with a fastest time through the first pass of ‘Forêt de La Petite Pierre’ (SS15), the place was theirs on the opening stage of the morning (SS15).

Unfortunately, Robert’s hard work was undone on the final speed test (SS18) when he misjudged the grip levels available – rolling his Fiesta and bringing an untimely end to his event.

Regardless of the result, the Formula One race winner can take pride in the progression he has shown this weekend. Driving well, he set a string of competitive times that prove he has the pace to challenge at the head of field on asphalt.

Robert Kubica (DNF) said: "I made a mistake on the last stage [SS18]. I misjudged the grip on a wet part of the stage. On the previous pass I thought I was a bit too cautious there. Unfortunately on the second pass there was a lot of dirt on the Tarmac and I didn't make it. I am very sorry because of the chance I have lost this weekend. Gaining experience in a new sport sometimes gets frustrating."

Team Principal, Malcolm Wilson OBE, said: “Robert [Kubica] was on course to secure his best ever result in the FIA World Rally Championship before rolling on the final stage. Thankfully both he and Maciek [Szczepaniak, co-driver] where unhurt in the incident.”