Jari-Matti Latvala admits he was resigned to ending a WRC season without a win for the first time as a factory driver, before his somewhat unexpected success at Rally Australia. 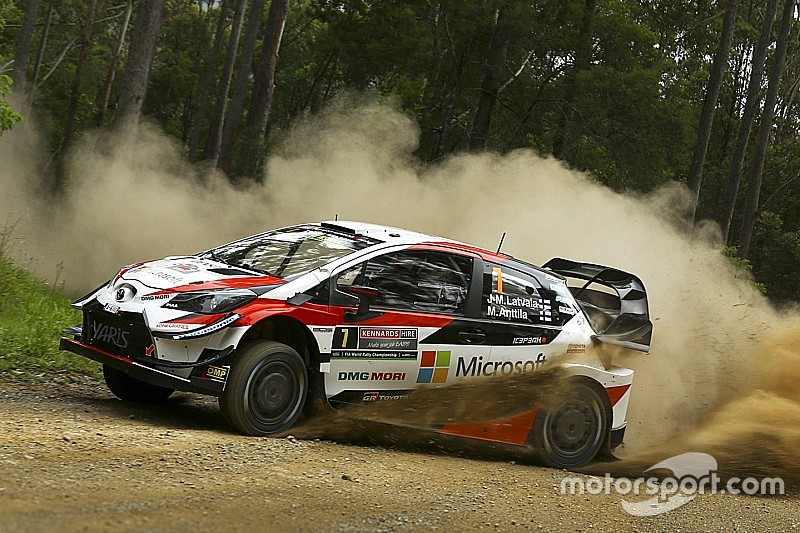 The Finn was expected to play the Toyota team game on the final day of the WRC season, first being told to play rear-gunner for title hopeful Ott Tanak who had the overnight lead.

Even when Latvala inherited the lead thanks to a Tanak mistake on this morning's loop, it was expected Toyota would swap the pair over to keep Tanak in the title fight.

However, the team team never the chance, Tanak swiping a tree and damaging his transmission on the penultimate test.

That opened the door for Latvala to win the event, help secure the manufacturers' title for Toyota, and keep a record stretching back to 2008 alive.

"I must say I had given up, I thought that this will be my first year when I did not win a WRC round," he said.

"Even before the rally, journalists were telling me I had done a race every year [since my first win in 2008]. I said: 'Yes, I know!' But okay, if didn't win a rally, then winning the manufacturers' title is like one victory.

"We had a good second half of the season and I'm really happy with this victory. When you work hard and don't see the results it keeps you down and doesn't motivate you.

"This was an important victory, but more important was the manufacturers' championship."

Latvala added that the wet conditions on the stages around Coffs Harbour required "110 per cent" concentration, as proven by a number of drivers – including Neuville and Tanak – struggling to stay on the road.

"I had in my mind the only target was to get more gap between me and Hayden – I didn't think to win this event," he explained.

"But the wet the conditions, they were in my favour and it gave me the chance to attack. And if you do it well, you can take good time. But it can also go wrong, really wrong.

"I had good attack early this morning and then I thought I would calm down a bit. Then Ott went off a little bit.

"Talking to Tommi [Makinen] at lunchtime, I said we continue with the controlled driving, no big risks – we needed to get the car to the finish. I focused on the afternoon, but making a mistake was so easy if you didn't concentrate 110 per cent.

"Some places were a bit more slippery than the others, they could catch you out so easily."

The Finn said his concentration was even higher on the Wedding Bells Power Stage, given that he crashed out of third place on the short burst at last year's event.

"I started the [Power Stage] and I know I am coming out of the stage hero or zero, and I don't want be zero," he said.

"Last year I broke the suspension. Okay it didn't affect the championship, but this time we had the chance to get the title.

"I knew we couldn't afford to lose this year. I didn't want a sad Christmas, I wanted a happy one!"